Just a small sketch of a pretty weed found under the mail box. 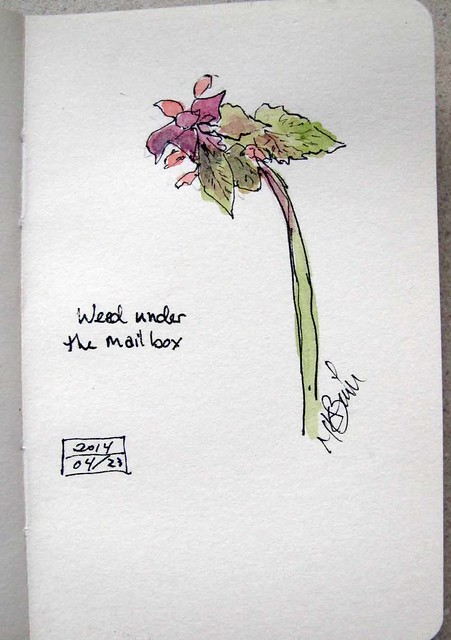 I have a cold.  Yuk.  Probably got it at the convention this weekend.  I don’t feel that bad and at first thought maybe I had allergies again.  Now it’s definitely a cold.  Drat.  I have plans!

I was awake in the middle of the night so I’ve caught up on this week’s Sketchbook Skool videos.  I’ve not felt like being outside to paint the sky, which is the homework.

Born in Michigan. Attended undergrad and graduate universities there. I've lived in England, Germany, Southern California and now Washington (state). I'm a retired Medical Social Worker with a past specialty in Oncology. I've enjoyed exploring historical re-creation through the SCA. I costume in several fandoms. Lately I've returned to Art and have taken up Urban Sketching, a version of en plein air painting.
View all posts by redharparts →
This entry was posted in Journal, Sketches and tagged watercolor, week. Bookmark the permalink.