I spent last weekend with my husband at Linux Fest NW, held at  Bellingham Technical College.     Don is the one with the interest as he uses several distributions of Linux.  We drove up Friday night after he finished work. We stayed at the Holiday Inn Express where our room was newly renovated and it was very comfortable.  I recommend it.  That’s where we’ll stay next year if we go for the weekend!

All photos from the weekend are here

I created a thumbnail page as a travel sketchbook page(s).  On Friday, the sketch is the road ahead as we neared Bellingham.  Also on the page is the glued-in logo for Linux Fest NW.   On Saturday is the Tux sculpture which greeted at the door of Linux Fest and my badge, which is also the schedule.  Tux is the mascot for Linux. 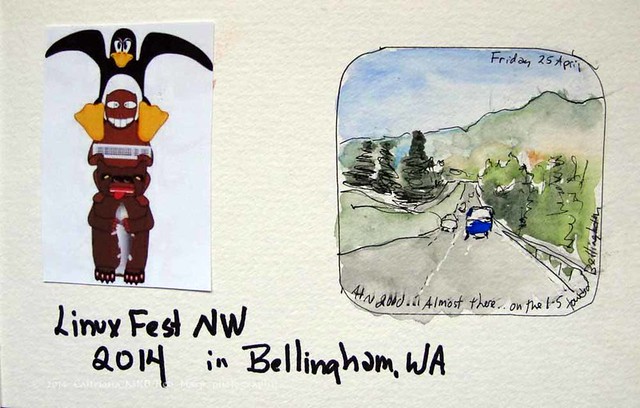 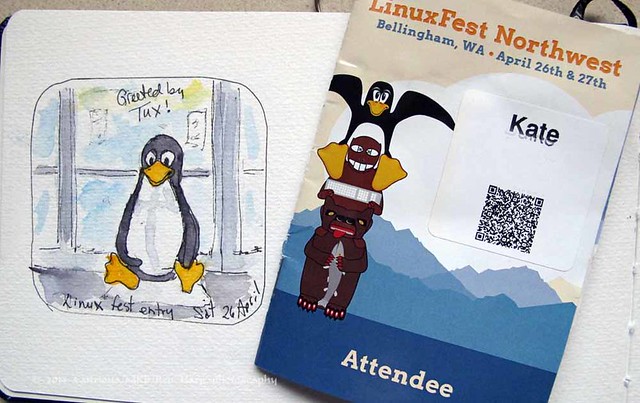 I did find 3 sessions to attend on Saturday.  Of possible interest to this arts blog is the one on Krita, an open source image creation program. Oscar Baechler was the presenter and his notes can be found here

I also took a break in the middle to go out to sketch!  I already knew from my one day there last year that I wanted to sketch the rocket outside Rocket Donuts!  I’d sketched a similar rocket in whacky Fremont neighborhood in Seattle last year! 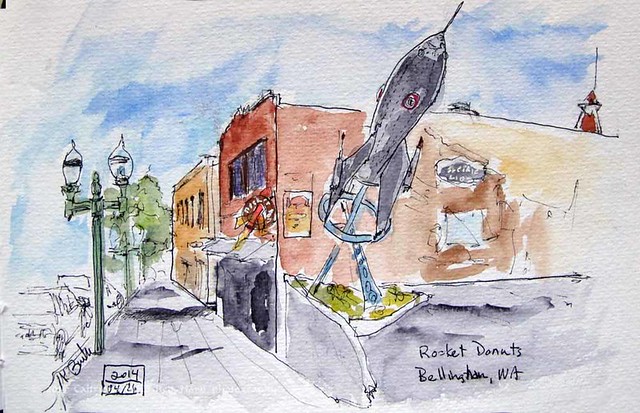 Though sunny, the breeze off the bay was chilly so I went inside to warm up with a cup of coffee.  While there, I sketched their robot, Gort. 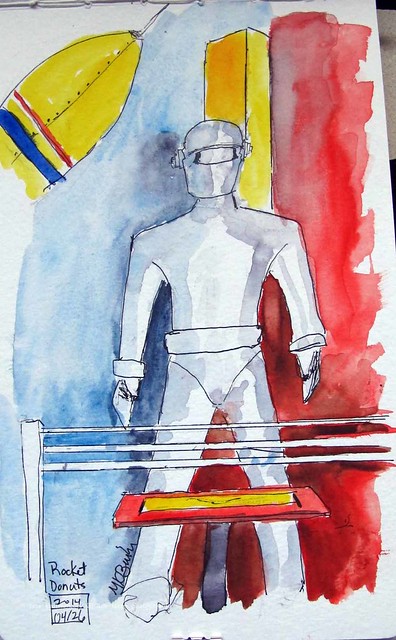 I bailed early from my afternoon session once they started to talk about writing Android apps.  I was interested in what’s coming for Android but I do not write apps!  While I waited for Don to be finished, I sat outside in the warm sun of the patio and sketched this sculpture.  It is “The House and Boat” by Ilan Averbuch, 2012, made from recycled granite and Corten weathering steel.  Of course, a Technical College would want to know the kind of steel used! 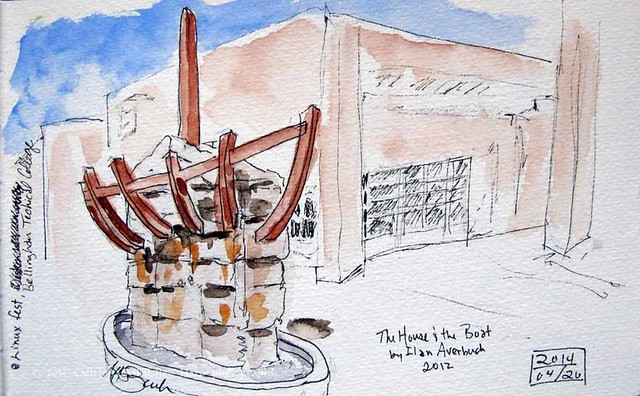 In the evening, we went to the after party at the Spark Museum of Electrical Invention.     There is a lot of really old electrical things there!  The highlight was the exciting “MegaZapper Electrical Show”  with ” the 4 million volt giant 10 foot arcs of purple lightning” which arcs to the “Lightning Cage designed and built by world-renowned Steampunk sculptor Ric Allen” in which there were 2 people!

I completely bailed on the sessions.  It was a mostly sunny day and I spent the entire day outside sketching.  Well, except for the brief, but heavy, shower.  Fortunately, I was inside the Viking Union at Western Washington University.  From the window high atop the hill I sketched the view looking down into the harbor. 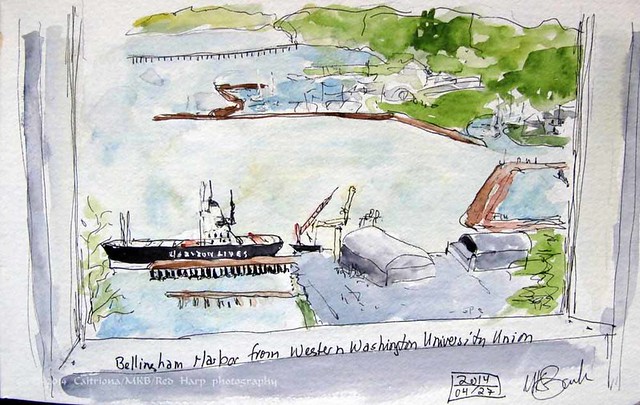 I drove around the University.  There are more photos, as above.

I drove around town, stopped at the Dakota Art Store.  Then out to the Harbor area.  I found this unusual Orca on a trailer.  It seems to be a portable ad for a Whale Watching company. 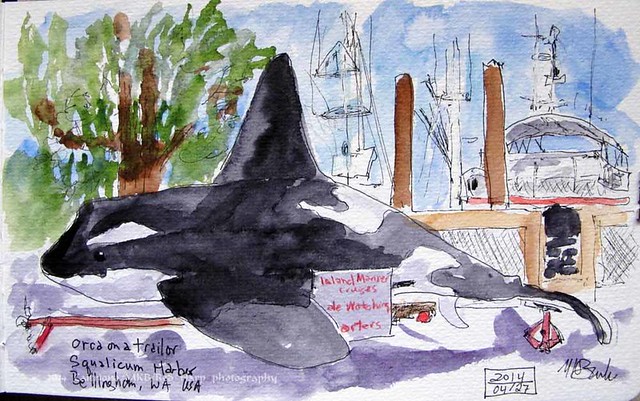 I next headed back toward the fest venue.  But first, I drove to St. Paul’s Episcopal church, thinking I might sketch the steeple.   Instead, I found this charming Victorian home with a tower.  It is the August H. Miller home, built in 1900.  It’s for sale, too.  If interested, the asking price is near $700,000! 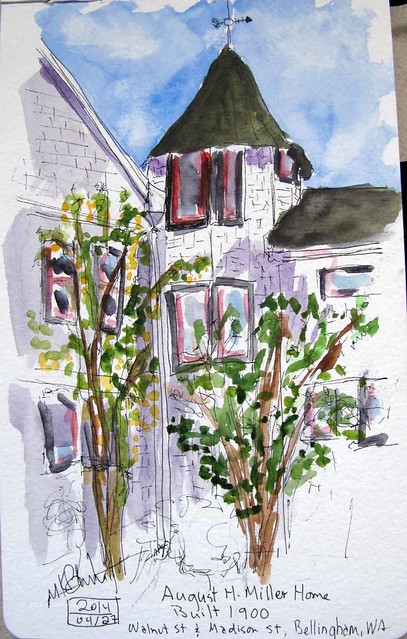 Born in Michigan. Attended undergrad and graduate universities there. I've lived in England, Germany, Southern California and now Washington (state). I'm a retired Medical Social Worker with a past specialty in Oncology. I've enjoyed exploring historical re-creation through the SCA. I costume in several fandoms. Lately I've returned to Art and have taken up Urban Sketching, a version of en plein air painting.
View all posts by redharparts →
This entry was posted in Journal, Sketches, Urban Sketchers and tagged Bellingham WA, LinuxFest NW, watercolor. Bookmark the permalink.