Urban Sketchers Seattle have been invited to document a building under construction for the Seattle Architectural Foundation Exhibit later this fall.  I thought I would document the renovation of the Renton Library that spans the Cedar River.  I’d read that it closed over the weekend so I went today to see what was going on.  I found them packing up the books to move to the temporary location.

There were pallets and boxes.  A librarian sat at the door to tell people it is closed and to give them a flyer with a map to the temporary location. 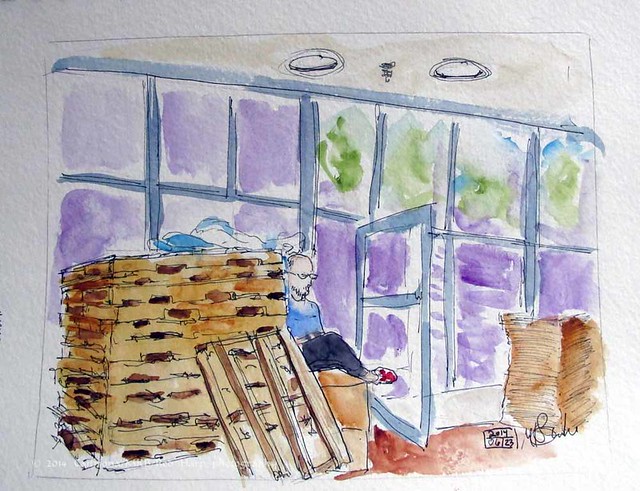 Renton has 3 branches of the King County Library System (KCLS).  Two of them are now closed for renovation.  This downtown Renton branch will be closed until September 2015.  The Fairview branch has been closed for about a year already but may open in a few months.  There is a small, temporary, location, though.   That leaves only the small Highlands branch open.

Born in Michigan. Attended undergrad and graduate universities there. I've lived in England, Germany, Southern California and now Washington (state). I'm a retired Medical Social Worker with a past specialty in Oncology. I've enjoyed exploring historical re-creation through the SCA. I costume in several fandoms. Lately I've returned to Art and have taken up Urban Sketching, a version of en plein air painting.
View all posts by redharparts →
This entry was posted in Sketches and tagged Library, Renton, WA. Bookmark the permalink.

1 Response to Library pack out