As we met up for the monthly Urban Sketchers Seattle outing yesterday, Gail & Jane told us this is our 5th Anniversary!

We  had our monthly sketch outing today in the area of construction around South Lake Union.  This is in preparation for participation in the Seattle Architectural Foundation annual Model Exhibit titled “In PROCESS”.   We will be showing our sketches.

I sketched two scenes that included construction cranes.   The first is a view I’ve wanted to sketch for quite some time now.  It’s right under the Monorail at Westlake Center, with the Space Needle in view down the street.  Today was cool and I had enough time to get the ink drawing finished before moving on to meet the group at 10am. 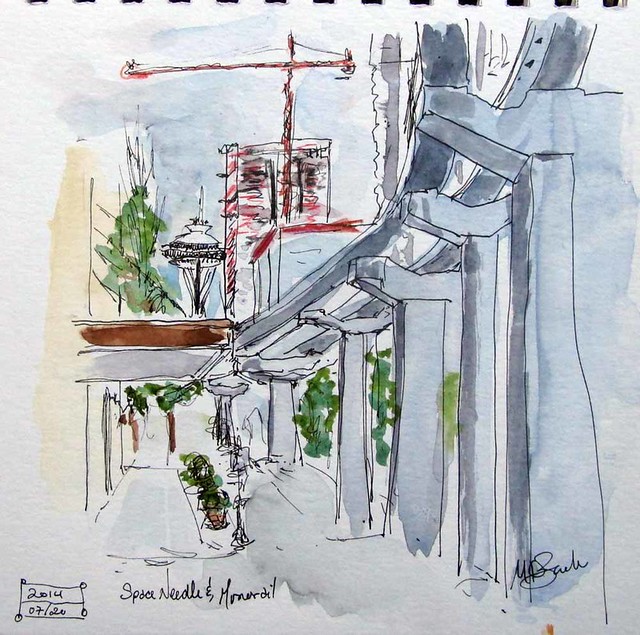 While standing there drawing, I had an experience I’ve never had before.  A man stopped and asked to look.  I always say “yes”.  But then he continued to stand hardly a foot away and proceed to correct how I was drawing it. I had a brief crisis of confidence as he, confidently, pointed with his finger on my paper and told me how to draw.  When I realized he had no idea either of my point of view or of perspective, I proceeded to do as I pleased.

Next, I liked the comparison of the old brick building with the new construction.  More cranes!  (Dare I say it’s the official bird of Seattle??) 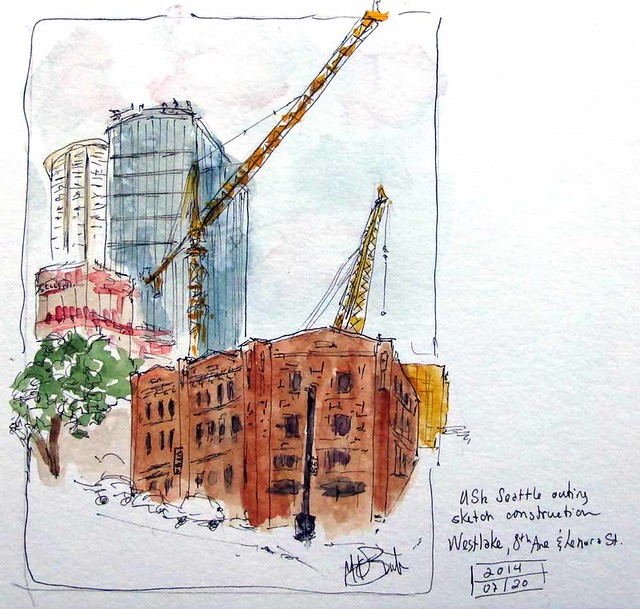 When we met for sketch sharing, in honor of our 5th Anniversary, Jane brought out some special beverages with which to toast.   Thanks to Gabi (in red at left) for starting it all off and to Gail and Jane for keeping us going!

After the outing, I stopped at Westlake Center for some lunch.  I sketched from the second story the view out the window. 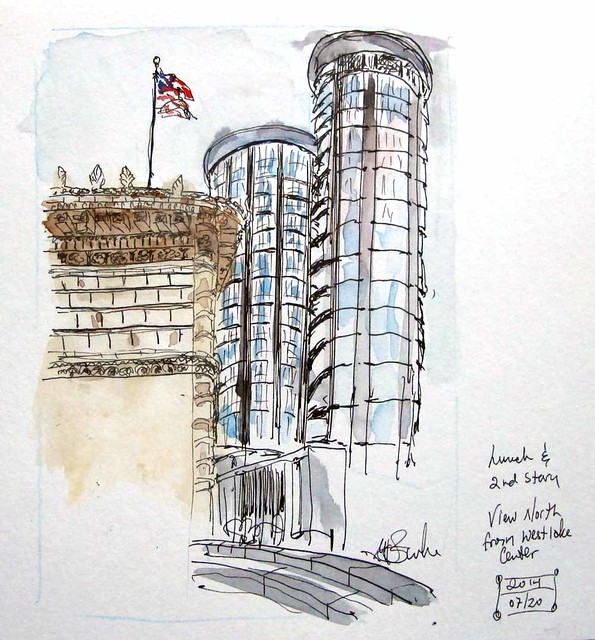 Born in Michigan. Attended undergrad and graduate universities there. I've lived in England, Germany, Southern California and now Washington (state). I'm a retired Medical Social Worker with a past specialty in Oncology. I've enjoyed exploring historical re-creation through the SCA. I costume in several fandoms. Lately I've returned to Art and have taken up Urban Sketching, a version of en plein air painting.
View all posts by redharparts →
This entry was posted in Sketch Crawl, Sketches, Urban Sketchers and tagged Seattle Urban Sketchers. Bookmark the permalink.