Posted on October 3, 2014 by redharparts

It was about 45 degrees this morning,  just a bit chilly to go out to sketch, especially since it was predicted to warm up to 65 or 70.  Sketchbook Skool starts up again with the 3rd Semester today.  I did watch a couple lessons but it was just too beautiful a day to stay indoors!  So I went out to sketch after lunch.

I first drove down to Soos Creek Botanical Garden, a few miles from my home.    I’d forgotten they close at 1500 and arrived at 1430.  I didn’t walk far in.  My first sketch was a dry stream in the Rain Garden, just some rocks and ferns. 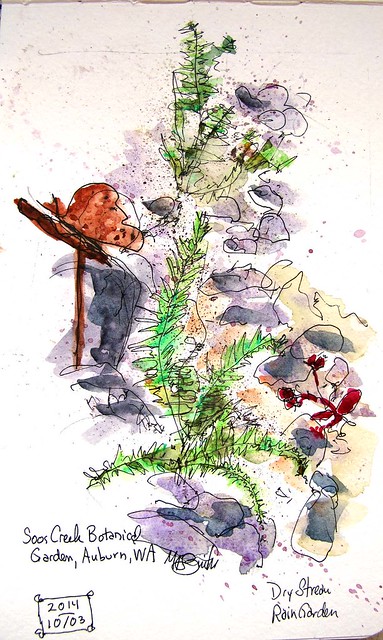 Since it was 1500 by then, I sat in the parking lot for my next sketch, in case they wanted me to leave!  I sketched the sign that was dripping with hops!  Such a lovely odor! 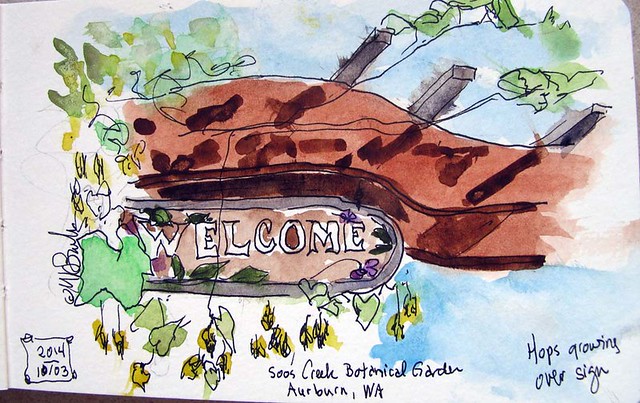 As I drove home, I looked for a side road from which I might see Mt. Rainier, which was definitely out today.  I found just the right place. 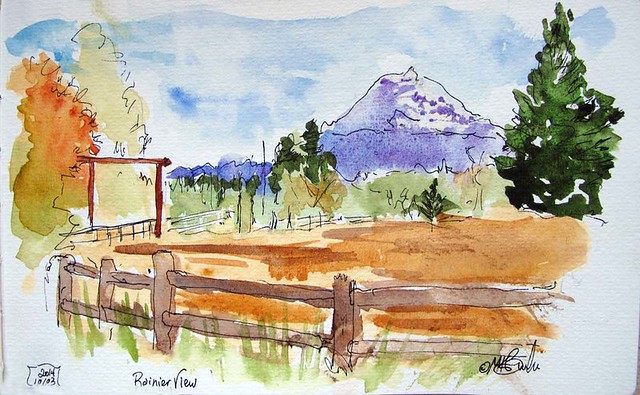 As I was finishing, the owner of the home where I was parked drove by on a lawn tractor.  Mr. S. stopped to chat.  He told me this field has just been bought by the county and he hopes they will turn it into a park.  It’s just up the hill from the long Soos Creek Trail. They aren’t in this view but there are 2 houses on the property.  He said the acreage was bought in the 1960’s by an airline pilot.  They other house belonged to his daughter.  How fortunate to have such a wonderful view!

Oh, and I discovered there is a new Trader Joe’s in Kent!  It might be closer than the one in Burien.

This was the sort of day that filled me with happiness that I live in such a beautiful place!  It was perfect weather, sunny, just the right temperature, blue sky with fluffy clouds. Since the trees and the grasses are turning, it seemed I was surrounded by a beautiful, golden light.

The day ended on a low note, though.  I came upon a traffic accident that had obviously happened just a few minutes earlier.  The car obviously at fault, having hit the other one in the rear, had it’s entire front end torn up.  People who had witnessed it were already out and helping, assisting the drivers and directing traffic.  It did not appear anyone was injured as the drivers were standing outside their cars.

Born in Michigan. Attended undergrad and graduate universities there. I've lived in England, Germany, Southern California and now Washington (state). I'm a retired Medical Social Worker with a past specialty in Oncology. I've enjoyed exploring historical re-creation through the SCA. I costume in several fandoms. Lately I've returned to Art and have taken up Urban Sketching, a version of en plein air painting.
View all posts by redharparts →
This entry was posted in Sketches, Urban Sketchers and tagged Auburn, Kent, Mt Rainier, Soos Creek Botanical Garden, WA. Bookmark the permalink.