Posted on November 4, 2014 by redharparts

Once again, for my next NaNoDrawMo sketch, I’ve returned to Michigan.  This is based from my own photo of an old style movie theater.  It is in Lapeer, Michigan.  It’s a small town that is the county seat in the area in which I grew up.  I saw Gone with the Wind here when it was re-released to theaters (probably the 1967 one). 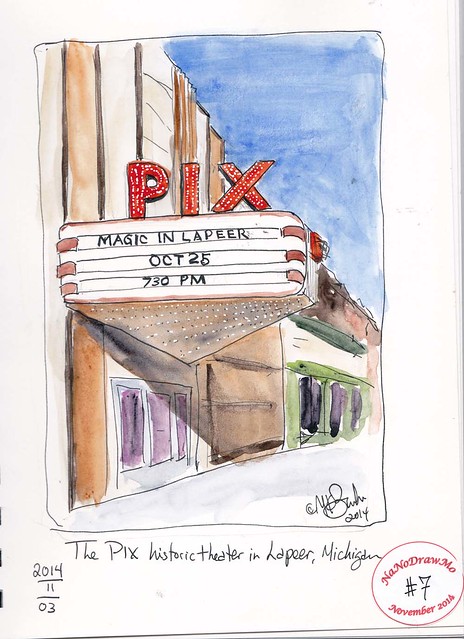 Born in Michigan. Attended undergrad and graduate universities there. I've lived in England, Germany, Southern California and now Washington (state). I'm a retired Medical Social Worker with a past specialty in Oncology. I've enjoyed exploring historical re-creation through the SCA. I costume in several fandoms. Lately I've returned to Art and have taken up Urban Sketching, a version of en plein air painting.
View all posts by redharparts →
This entry was posted in Daily Sketches, NaNoDrawMo and tagged Lapeer, Michigan, NaNoDrawMo, watercolor. Bookmark the permalink.