Spock is not dead

In case you’re not a geek or didn’t hear, Leonard Nimoy died Friday at the age of 83, of COPD.  It was a sad day for us geeks.  I’ve been wearing my TOS Science Officer badge with a black band since then.

I watched TOS in high school on a black and white TV.  (For those who don’t speak geek: TOS = The Original Series).  Nimoy’s portrayal of Spoke meant so much to me as a teenager. In TOS, it was Spock with whom I most identified.  I never particularly liked Kirk.  As many of my (geeky) friends have said, his character – and how he portrayed him – was a role model for those of us who felt we didn’t fit in.

In Seattle, we’re fortunate to have the Science Fiction Museum (attached to the EMP – Experience Music Project), largely funded by Paul Allen and blessed with many items from his collection.   The museum announced that in honor of Leonard Nimoy, on this weekend only, they would display the costume tunic he wore as Spock during TOS.  So, of course, I wanted to go see it.

I went at opening time, thinking it wouldn’t be very crowded.  I took a number of photos and then I was able to do a sketch. 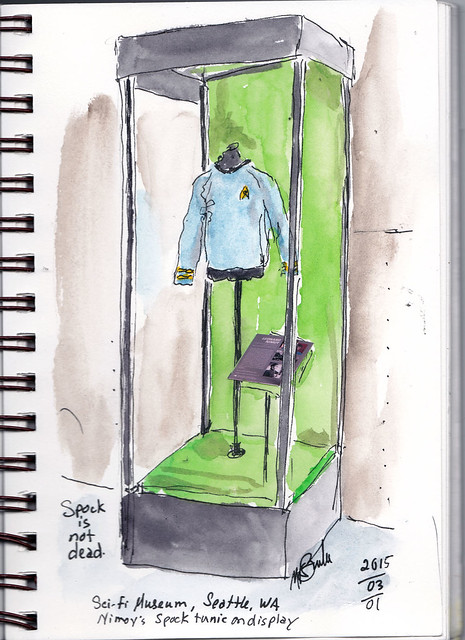 Spock is not dead.  Live Long and Prosper.  Leonard Nimoy did both.

There are a bunch more photos here, including some in the lobby for the Star Wars exhibit.  I still want to see that but today wasn’t the day.

Born in Michigan. Attended undergrad and graduate universities there. I've lived in England, Germany, Southern California and now Washington (state). I'm a retired Medical Social Worker with a past specialty in Oncology. I've enjoyed exploring historical re-creation through the SCA. I costume in several fandoms. Lately I've returned to Art and have taken up Urban Sketching, a version of en plein air painting.
View all posts by redharparts →
This entry was posted in Sketches and tagged ink, Science Fiction Museum, Seattle, Spock, WA, watercolor. Bookmark the permalink.

2 Responses to Spock is not dead