About 28 sketchers joined in for a the monthly sketch outing with many new people again this month!  We met at the main Tacoma Library, hosted by Beverly, one of our own, and the manager there.

I’ve been there once before for an exhibit of Chandler O’Leary‘s sketchbooks.    So I knew what I wanted to sketch.

At that first visit, I was amazed to see such old technology in the NW Room, which is the archive. “Everything you have ever wanted to know about our city and our region can be found here. The collection includes a wealth of unique databases, hundreds of thousands of photographs, genealogical records and much more.”

There is a card catalog… actual wooden case with actual paper cards.  Since Rom took care of documenting that, I decided I wanted to sketch the Microfilm Reader!  Who remembers those?   I didn’t even plan the “National Geographic red” sweater. She was actually wearing it.  Without it, the scene would have been rather monochromatic.    There is a bit of photo-collage in the microfilm reader screen. 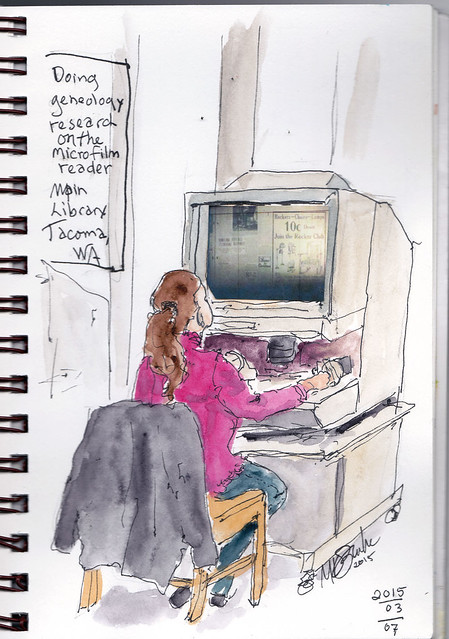 History of the library:  It opened in 1903 and was the first Carnegie Library built in Washington state! 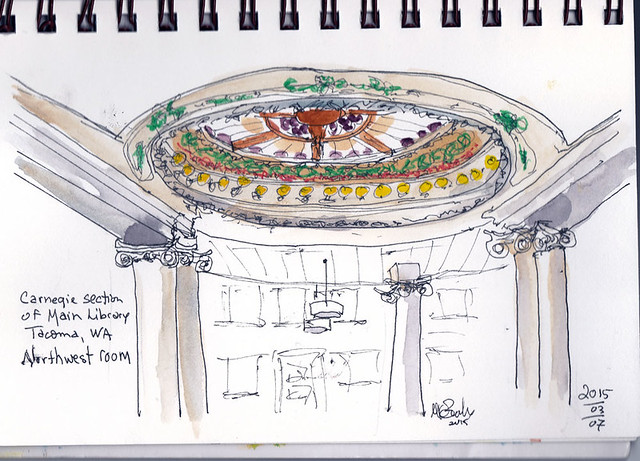 We gathered to share sketches in a conference room and then had our group photo.  More photos are here

Thanks to Beverly for providing the room, the tour and the snacks!

Not quite half of us went out to lunch together to the restaurant in the Hotel Murano.  I should have taken a photo of the size of the fish serving in my  Fish n’ Chips.  It was a whale!  I gave 2/3 of it away!   I did take this avant-weird photo of the glass sculpture outside juxtaposed with another building….

Born in Michigan. Attended undergrad and graduate universities there. I've lived in England, Germany, Southern California and now Washington (state). I'm a retired Medical Social Worker with a past specialty in Oncology. I've enjoyed exploring historical re-creation through the SCA. I costume in several fandoms. Lately I've returned to Art and have taken up Urban Sketching, a version of en plein air painting.
View all posts by redharparts →
This entry was posted in Sketch Crawl, Sketches, Urban Sketchers and tagged ink, Library, Tacoma, Urban Sketchers, WA, watercolor. Bookmark the permalink.