The previous time Urban Sketchers met in Fremont my priority was seeing the Troll.  This time, I sketched another Fremont icon….Lenin.  The statue had been defaced.  A passerby commented on the defacement, “don’t they know the statue is ironic?”.  My thought was that perhaps the person(s) defacing it had been or had family who had been, victims.  I can almost always see two sides.  Written on the back of the statue was: “Bloodthirsty tyrant;
Murdered 50 million souls; Repudiate him!”   From the webpage, linked above, “This sculpture is placed here in the Artist’s Republic of Fremont, as a symbol of an artistic spirit that outlasts regimes and ideologies, and as tangible proof that art does outlive politics.” 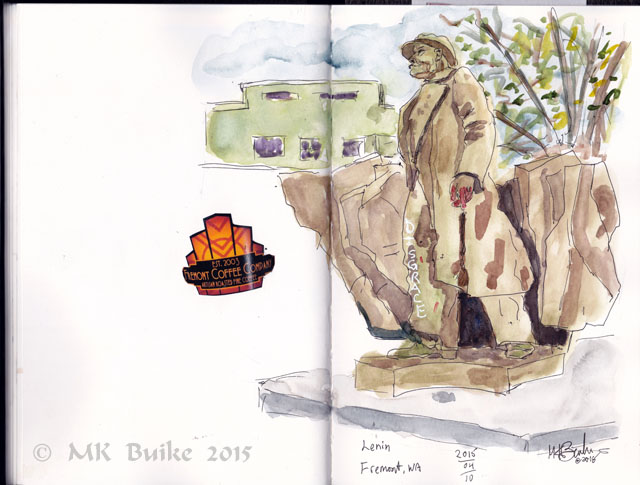 Opposite the corner where Lenin stood was the “Space in Fremont” set of sculptures.  They looked like planets hanging from poles.  I sketched the group of them, all on one page. 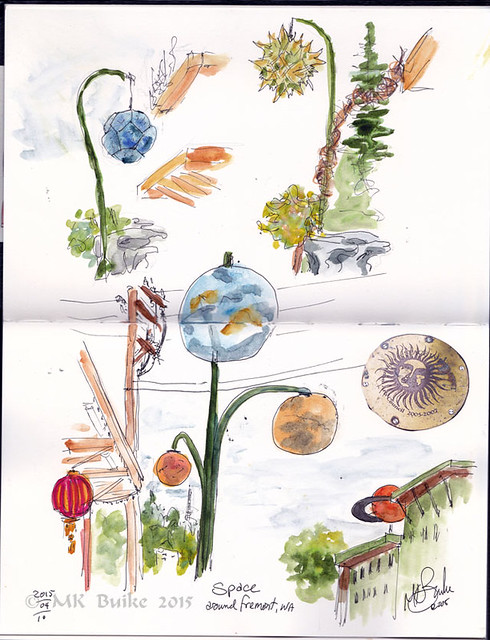 with photo collage of the plaque

Even the sidewalk was decorated with a space-y theme.

By the time I finished sketching the final blue one, I was quite chilled. It was not as nice a day as Wednesday or Thursday!   So back to our meeting place, Fremont Coffee, for a hot
chocolate!

Then we shared our sketches.

Born in Michigan. Attended undergrad and graduate universities there. I've lived in England, Germany, Southern California and now Washington (state). I'm a retired Medical Social Worker with a past specialty in Oncology. I've enjoyed exploring historical re-creation through the SCA. I costume in several fandoms. Lately I've returned to Art and have taken up Urban Sketching, a version of en plein air painting.
View all posts by redharparts →
This entry was posted in Sketch Crawl, Sketches and tagged Fremont, ink, Lenin, Seattle, Urban Sketchers, WA, watercolor. Bookmark the permalink.

3 Responses to Sketching in Fremont again