Urban Sketchers Tacoma held our regular montly Wednesday outing at the Foss Waterway Seaport.  I think I was not alone in hoping to have sketched outside.  But it was cloudy, foggy and chilly.  We all opted for inside, which was very interesting.

I was fascinated with this whale sculpture!  Half of us included it in our sketches.   I drew the “guts side” that shows how it was built. 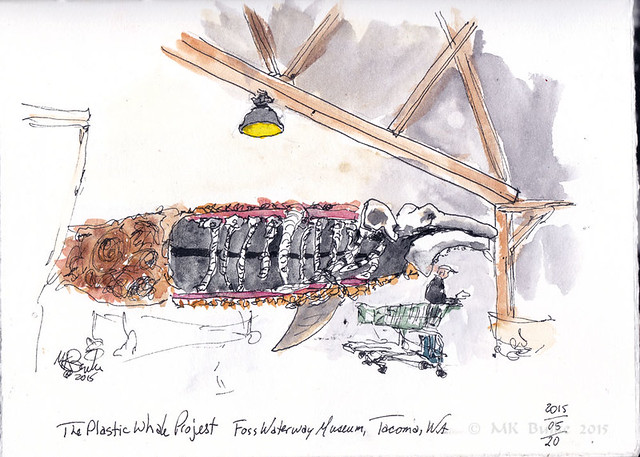 This is a Gray Whale. The project demonstrates the amount of plastic trash in the ocean.  The skin of the whale is made of 9,000 plastic bags, braided together by students at 15 schools.  The Whale’s skin shows a map of the Pacific Ocean and the Great Pacific Gyre in which ocean currents pull trash from American and Asia into the center of the Pacific Ocean.  The skeleton is made by high school art students.  It is made of disposable plastic
forks (stuffed into 2 Liter soda bottles).  The vertebrae are milk jugs.  The ribs are small cups used in many school cafeterias.

In April 2010 a gray whale washed up on shore in West Seattle.  Scientists found approximately 30 plastic bags and other plastic trash in it’s stomach.

Before I saw the whale, I decided I’d draw a montage of diving equipment from different eras.  After sketching the whale, I returned that that plan.  I don’t know the date of the yellow equipment as there was no info card.  It looks current and modern to me, though. 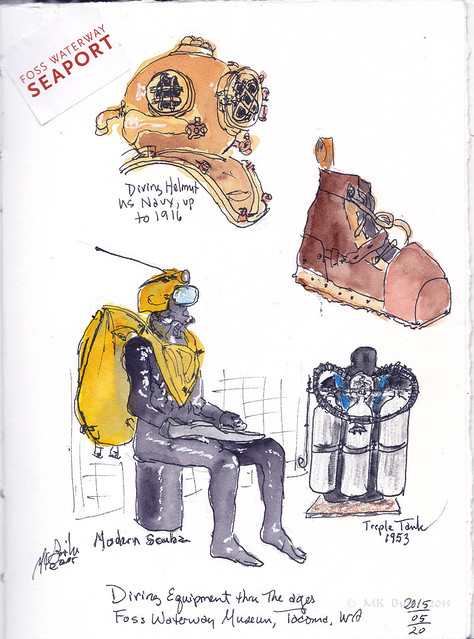 Sharing sketches.  The staff were excited to see them, too.

Born in Michigan. Attended undergrad and graduate universities there. I've lived in England, Germany, Southern California and now Washington (state). I'm a retired Medical Social Worker with a past specialty in Oncology. I've enjoyed exploring historical re-creation through the SCA. I costume in several fandoms. Lately I've returned to Art and have taken up Urban Sketching, a version of en plein air painting.
View all posts by redharparts →
This entry was posted in Sketch Crawl, Sketches, Urban Sketchers and tagged Foss Waterway, Tacoma, Urban Sketchers, WA, watercolor. Bookmark the permalink.