This is a long post as I had a lot of fun sketching today!  This Astronaut hunting expedition has been planned for almost a week, ever since it was predicted that today would be cooler.

I took my new Field Notes “Workshop” Limited edition notebooks.  Larry Marshall mentioned them as having better paper, more suitable for sketching.  I used them on the bus, light rail and during lunch at The Armory.  I found I’m much more likely to do some quick people sketching with pen in that little book than in my pocket watercolor book with the very good paper.  I like it a lot.   Sketches all combined in one image, below.

Right on the Monorail platform is Space Tourist by Peter Reiquam.  The astronaut there has some company in the form of a robot called Monorail Man. 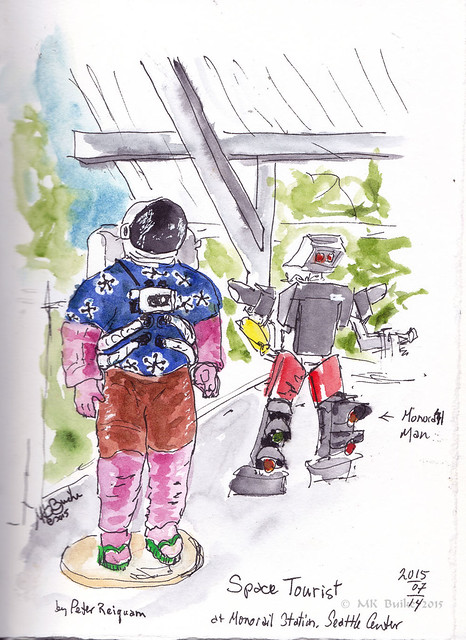 While sketching this, I had two interesting encounters with passersby.  One was a woman on her way to work at Seattle Center.  She said, “oh, you should send that to the Seattle Times!  There’s that ‘sketcher guy’ and it looks like what he does”.  That’s only the second time a stranger has referenced Gabi, “The Seattle Sketcher”, and founder of “Urban Sketchers”.

The next encounter was a small boy with his mother who stopped to look.  He commented about drawing in such a way that I asked him whether he drew.  He said he did “but not as good as you”.  Awww…. he was only about 6 years old!  Now I wish I’d given him a short “Danny Gregory silence the monkey” bit of encouragement.  I told him to keep drawing and he’ll get better.  Draw every day.  I showed him the small Field Notes notebook and suggested he could carry a small notebook and a pencil and draw whenever he has a chance.  His mother commented, “that’s a good idea”.

Next on the agenda was the Pacific Science Center.  I walked around to the Denny Way entrance, hoping the astronaut was in the public lobby.  It was not.  It seemed really annoying that I’d have to pay $27 to get in to see it and spend a half hour sketching. I thought these were all in places open to the public.   I spoke to staff and the manager
agreed I could enter just to do the drawing.  I made certain I went out the same way so they knew I’d exited and thanked the staff again. 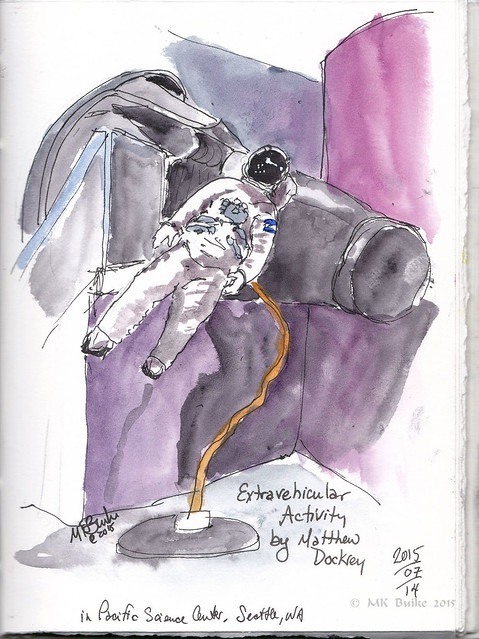 It’s next to a capsule in which visitors can sit.

On the way back to the Armory, I passed the view of the KOMO 4 TV station across the street.  Just over the bushes is the site of the horrible helicopter crash, right onto the street, that killed KOMO’s news photographer and the pilot.  I stopped to think of them for a moment.  It still feels sad.  It was almost a year and a half ago.

On my way back to the armory, I stopped to sketch a scene I’ve wanted to do for a while now.  I’d made a mental note to sketch it today if there was time.  I even found a spot in the shade as it was getting rather warm.  This is “Sonic Boom” by Dan Corson (2013).  The flower sculptures are 40ft tall and have a 20 ft diameter.  They are powered by photo voltaic cells for the chorus of sounds each flower produces when people move around it. 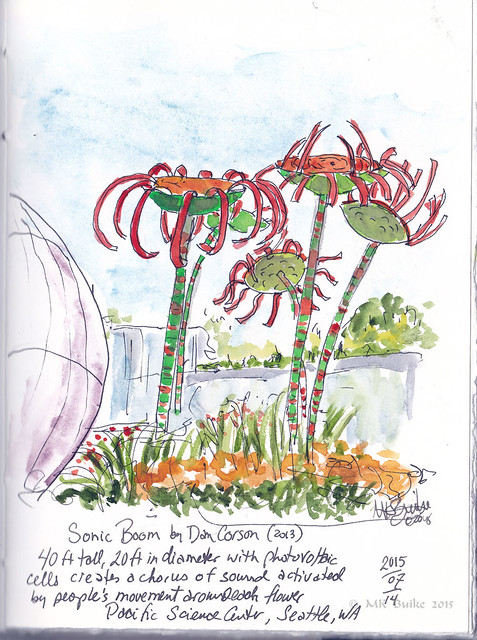 Lunch and more sketching in the little notebook. 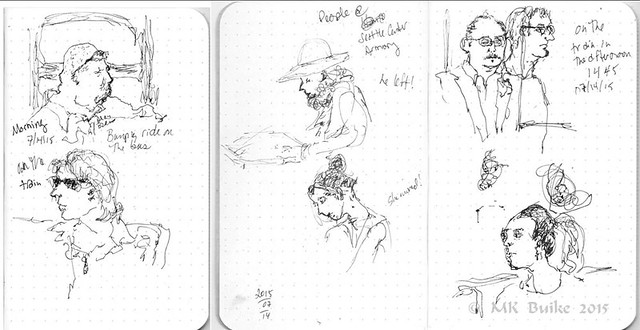 The last sketch of the day was Destiny by Camille Patha at Science Fiction Museum (EMP).  It has really bright lights that are hard to convey in watercolor. 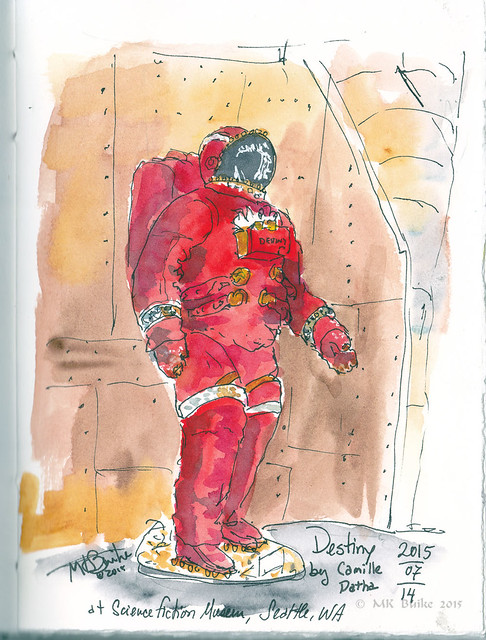 There’s also a lot of “bling”

After finishing that sketch, I used my membership to go through one of the exhibits.    I quickly went through “Infinite Worlds” but it was just too crowded to see anything well.  So I I didn’t want to pay the extra to see Star Wars costume exhibit in that situation.  There is also a “We Are 12” exhibit with Seahawks Superbowl memorabilia.

Born in Michigan. Attended undergrad and graduate universities there. I've lived in England, Germany, Southern California and now Washington (state). I'm a retired Medical Social Worker with a past specialty in Oncology. I've enjoyed exploring historical re-creation through the SCA. I costume in several fandoms. Lately I've returned to Art and have taken up Urban Sketching, a version of en plein air painting.
View all posts by redharparts →
This entry was posted in Photography, Sketches and tagged Astronauts on the Town, Museum of Flight, Seattle, Seattle Center, WA, watercolor. Bookmark the permalink.