Day 1 in the North End

This is Wednesday, August 5.

Dropped Himself at the airport and took off north.  This was my little trip to sketch the four Astronauts on the Town that are placed in locations north of Seattle.  I also connected with some other sketchers at a couple events.

By the way, the auction has started for the Astronauts on the Town.  From the web site, the “buy it now” price is $2500.  So far, two have sold.

First stop was Third Place Books in Lake Forest Park.  The astronaut is Reflections of the Future by Anna Harris.  Posters on the desk are photo collage. 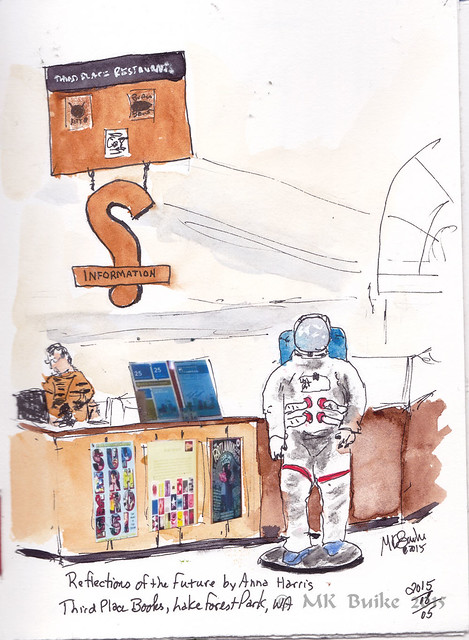 While there, spoke with staff about the project and one of them took this photo.  I ended up on their blog, which I posted about at the time (see post before this one).   The staff took a photo of me with my sketch next to the astronaut.

Next stop was Boeing’s Future of Flight.  A Brief Compendium of the Future by Paul Kuniholm Pauper was another astronaut in a hat! 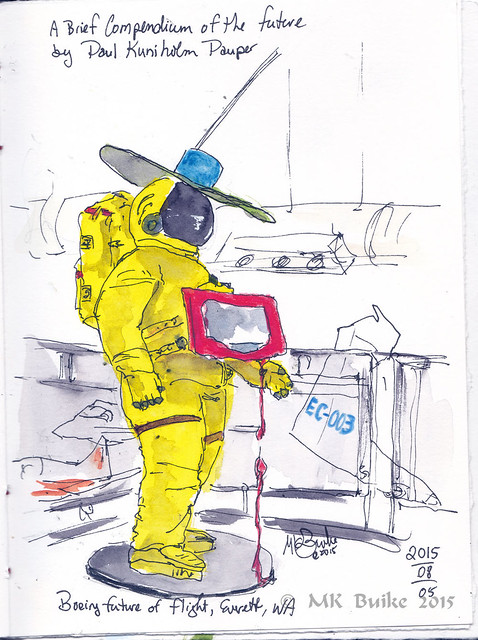 That was it for Day 1.  I picked a hotel on the Everett waterfront.  There was an interesting Victorian building nearby.  I started to sketch but then it started to rain.  Soon it was really pouring!  Hope there was that much rain back at home.

Some photos from the day are here.

Born in Michigan. Attended undergrad and graduate universities there. I've lived in England, Germany, Southern California and now Washington (state). I'm a retired Medical Social Worker with a past specialty in Oncology. I've enjoyed exploring historical re-creation through the SCA. I costume in several fandoms. Lately I've returned to Art and have taken up Urban Sketching, a version of en plein air painting.
View all posts by redharparts →
This entry was posted in Sketches and tagged Astronauts on the Town, Everett, watercolor. Bookmark the permalink.