Why I’ve been absent here

The reason for my absence is  my husband had a planned major surgery on 21 April.  Then his hospital stay was extended by a complication.  The surgery was successful and the complication resolved.  He was happily discharged home on 2 May.  However, due to the expected limitations caused by the surgery, he needs my intermittent help at home.  I’ll not be able to join my fellow sketchers on our outings for a few weeks.

I was in my husband’s room from 0600 to 2000 or 2100 every day of the 12 days he was there… except the night after his surgery, when I slept in his room.  I sketched him 24 hours post surgery but I’m not sharing that sketch.  However, here is a portion of the sketch depicting his RN, Vita.  She got us through those first very difficult days just post surgery. 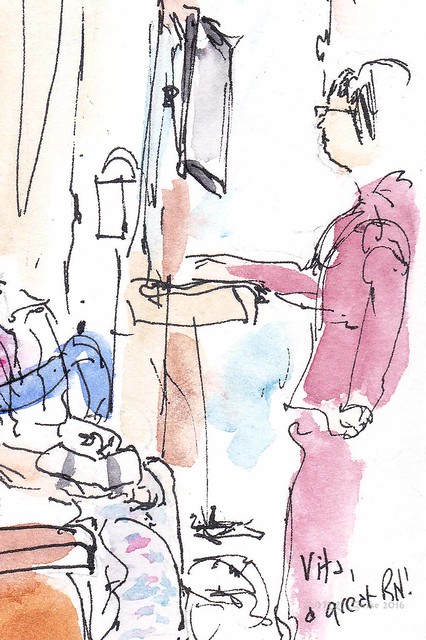 On each ward, they have these standees of real Overlake RN’s, encouraging people to be quiet.  On intensive care, it is Mac.  So when Himself took his first walk outside the room with Physical Therapy, he went “to Mac and back”!

Many sketchers have written about the calming effects of drawing on location.  I experienced this first hand during the hospitalization. At times, I was very anxious for his well being.  One afternoon when he was finally resting comfortably, I went out to a sunny patio to sketch for an hour or so.  I really did forget what was going on, focusing only on drawing the scene in front of me. It was very relaxing. 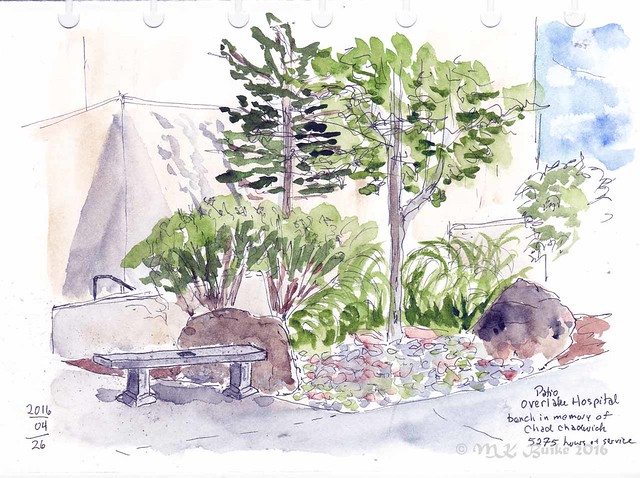 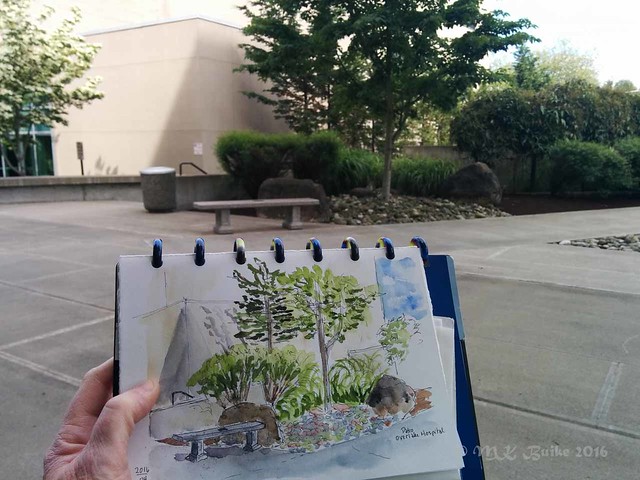 Once he was moved from intensive care to the ward , we had a view across the freeway to downtown Bellevue, WA.  I’ve sketched these buildings from the patio of the clinic across the street.  From this view, I was amused by what looked like a pregnant building. 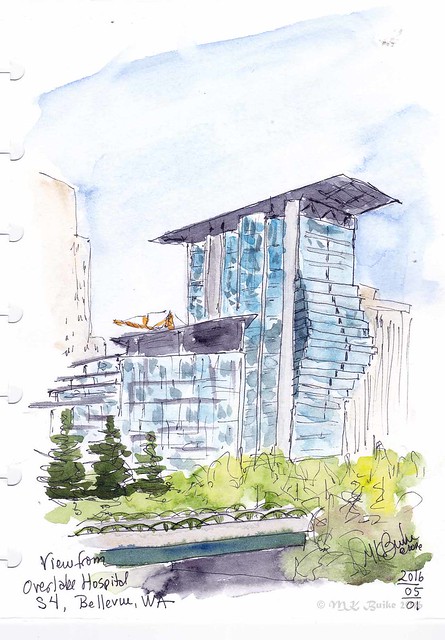 I am very grateful to the fantastic surgeons, their Physician’s Assistants, the nurses and the team of other health professions who helped my husband have a good outcome.  I was very impressed by Overlake Hospital.

Born in Michigan. Attended undergrad and graduate universities there. I've lived in England, Germany, Southern California and now Washington (state). I'm a retired Medical Social Worker with a past specialty in Oncology. I've enjoyed exploring historical re-creation through the SCA. I costume in several fandoms. Lately I've returned to Art and have taken up Urban Sketching, a version of en plein air painting.
View all posts by redharparts →
This entry was posted in Sketches, Urban Sketchers and tagged Bellevue, hospital, Overlake, WA, watercolor. Bookmark the permalink.

13 Responses to Why I’ve been absent here