Then I realized, from posts on Facebook, that the SCA Kingdoms of Caid and An Tir are holding their Crown Tourneys. Crown Tourney is a big deal and we almost always attended.    **

These are my husband’s swords.  In the distant past, he fought in Principality Coronet Tourney and Kingdom Crown Tourney.  Also visible is the edge of one of his shields with his Arms (Coat of Arms, you might say; we say “Arms”).   The swords are made of rattan covered in duct tape.  They are made to be less likely to injure but still have the weight and handling of a real, steel, medieval sword.  SCA Newcomer portal on armored combat  for more info.  Since we haven’t been participating in this group, his equipment is stored in the rafters of the garage. 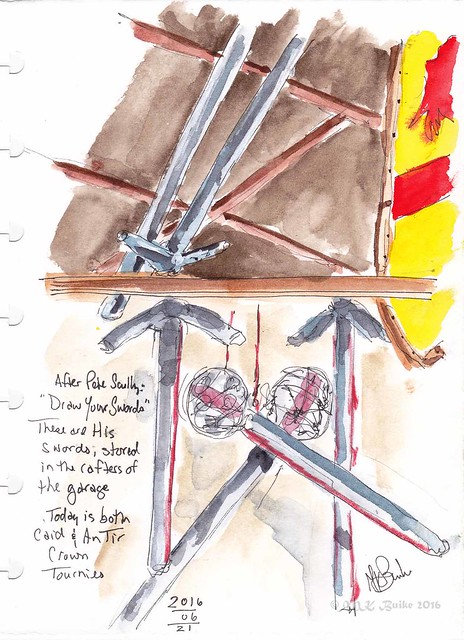 **I could write pages explaining the Society for Creative Anachronism (SCA) and our involvement.  My husband and I were very involved when when lived in Germany (then the Principality of and now the Kingdom of Drachenwald) and SoCal (Caid). Our closest friends are still people we met in the group. Since moving to Washington (An Tir), we have hardly participated at all.  Thus, his swords and shields are stored in the rafters of the garage.

If you really want to know more, visit the SCA’s Newcomers portal.

Born in Michigan. Attended undergrad and graduate universities there. I've lived in England, Germany, Southern California and now Washington (state). I'm a retired Medical Social Worker with a past specialty in Oncology. I've enjoyed exploring historical re-creation through the SCA. I costume in several fandoms. Lately I've returned to Art and have taken up Urban Sketching, a version of en plein air painting.
View all posts by redharparts →
This entry was posted in Crafts, Journal and tagged An Tir, Caid, Drachenwald, ink, SCA, Society for Creative Anachronism, watercolor. Bookmark the permalink.

3 Responses to Drawing HIS Swords