The Bridge that DNA built.

Seattle Urban Sketchers had been to the Helix Pedestrian Bridge before but I never knew about it until it was our scheduled outing for this month.

It is a marvel of a bridge!  Here is some information I found about it:   “Spanning 11 railroad tracks, this bridge connects Amgen’s office complex on the waterfront to a major arterial road. The bridge is designed after the double helix structure of DNA. (Amgen is one of the world’s largest biotech companies.)”  [I think I heard Amgen no longer occupies the building there.]

In 2004, the Amgen Helix Pedestrian Bridge received the “Outstanding Project” award under the Bridges and Transportation category given by the National Council of Structural Engineers Association.

It’s a very complex structure to sketch.  I picked this view as I thought it was a bit challenging but not beyond what I might be able to do.  That’s Susan H. sitting in front of me. 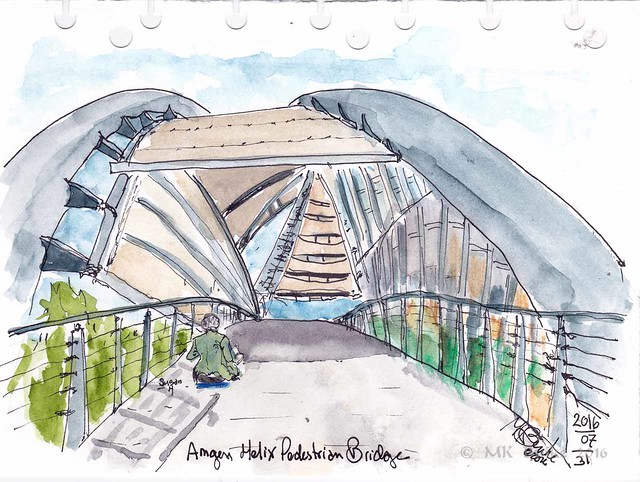 We were supposed to all begin by meeting at “Fish On” Bait and Tackle Shop/Cafe along the trail.  It was hard to find and many didn’t make it.  I headed back to find a view of the pier.  These are the National Oceanographic and Atmospheric Administration (NOAA) ships. 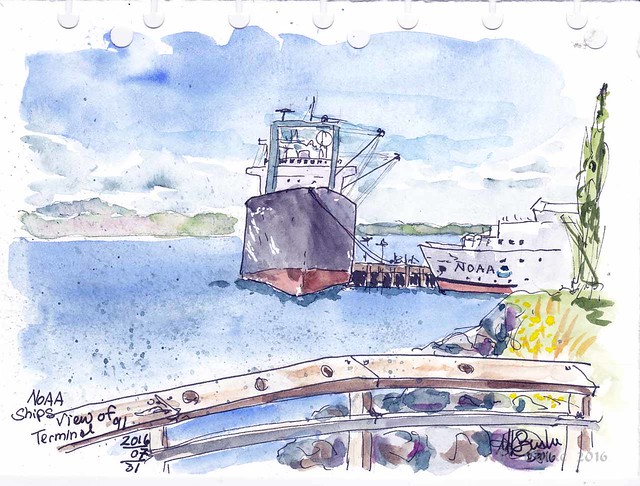 What is with this leaning boat. I did not notice I tilted it while drawing it!

Then back to the bridge for our sharing session.  There were a few new people and a couple people had to leave early so we’re missing them in the group photo. 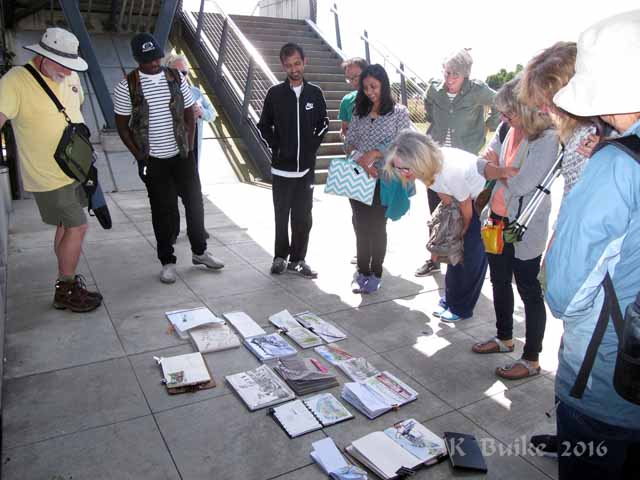 Born in Michigan. Attended undergrad and graduate universities there. I've lived in England, Germany, Southern California and now Washington (state). I'm a retired Medical Social Worker with a past specialty in Oncology. I've enjoyed exploring historical re-creation through the SCA. I costume in several fandoms. Lately I've returned to Art and have taken up Urban Sketching, a version of en plein air painting.
View all posts by redharparts →
This entry was posted in Sketch Crawl, Sketches, Urban Sketchers and tagged Helix Bridge, ink, Pier 91, Seattle, WA, watercolor. Bookmark the permalink.

3 Responses to The Bridge that DNA built.