Posted on September 3, 2016 by redharparts

Urban Sketchers Tacoma met today at the Foss Waterway Seaport.  Since I’d been there sketching with the group before, I chose to sketch outside.  It was lovely weather I didn’t want another day indoors.  This is perhaps the first time I’ve devoted the entire sketch outing to one sketch.  It is also larger than I normally do as it is in a 9″x12″ sketchbook (22.9 x 30.5 cm) 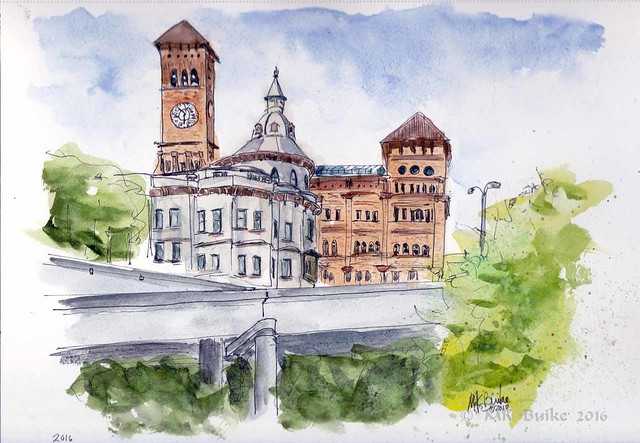 This is the view from the dock at Foss Waterway, looking back into the city center.  The old Tacoma Courthouse is the tan brick building and the lighter colored one with dome is the Pacific Building.  It was a rail station at one time.

We did the usual sharing of sketches and group photo.  I think there were more sketchers than in the photo as at one point I counted 24 people. 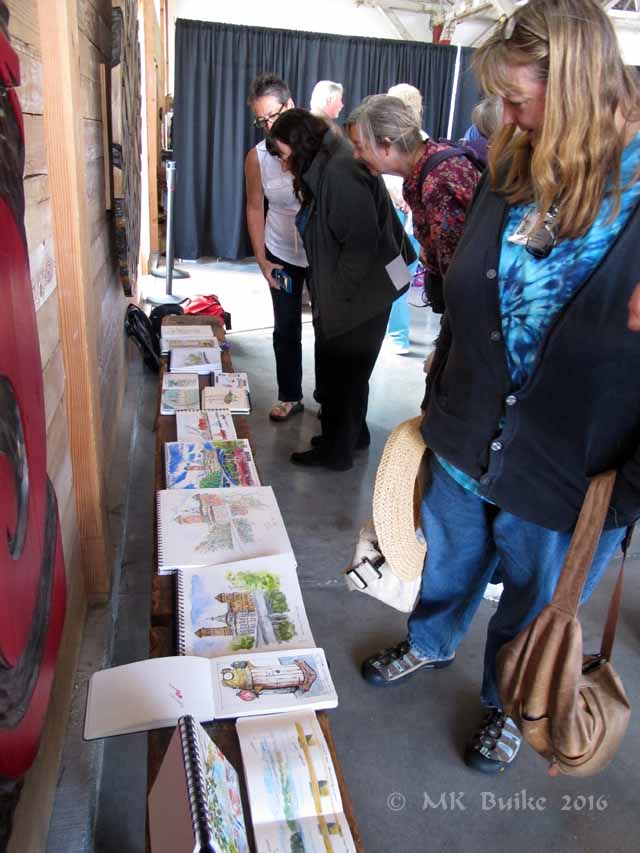 Then we went to lunch at the nearby Rock the Dock. Well, it was rockin’ alright.  It took an hour to get our food.  And then we stood in a line for at least 20 min just to pay.  It wasn’t the servers fault…. there were just two of them for the entire place, including a jam backed patio!  Management for the fail!  But we made use of the time waiting for our meals by sketching each other! 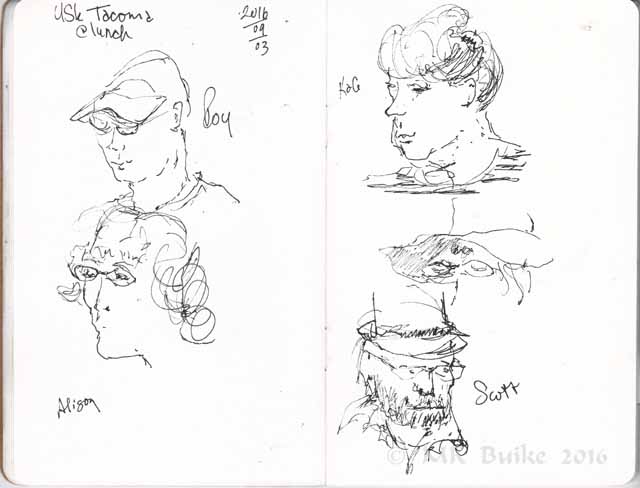 not necessarily good likenesses and a couple I didn’t finish as my victim moved!

Roy’s sketch of everyone at the lunch table (a la Lapin!)  [to get the sketche visible, his entire face was darkly shadowed…not the best edit to lighten the shadow but at least he can be seen]

Born in Michigan. Attended undergrad and graduate universities there. I've lived in England, Germany, Southern California and now Washington (state). I'm a retired Medical Social Worker with a past specialty in Oncology. I've enjoyed exploring historical re-creation through the SCA. I costume in several fandoms. Lately I've returned to Art and have taken up Urban Sketching, a version of en plein air painting.
View all posts by redharparts →
This entry was posted in Sketch Crawl, Sketches, Urban Sketchers and tagged Foss Waterway, Tacoma, WA, watercolor. Bookmark the permalink.