An intrepid group of 4 Seattle Urban Sketchers met at Bergen Place Park today.  Perhaps it was the sudden autumn weather following the first day of Fall that kept some of our usual group away.  It was chilly with light rain.

This park was built in honor of Seattle’s Sister city in Norway, Bergen.  The park was dedicated by His Majesty Olav V, King of Norway October 19, 1975.

My sketch highlights the sculpture in the park, “Witness Trees”, by Jenn Lee Dixon.  The following is from the plaque on each “tree”:
First Tree:  About 420 million years ago, plants first appeared on land.  These trees had no roots: a tangle of specialized branches lay on the surface in the debris of seaweed and moss from the sea.
Clam Tree:  When the locks were dredged, giant mountains of clam shells were found that had been discarded over the centuries by the Lake People who were one of several bands which formed the Duwamish tribes.  Clam Tree takes its shape from Coast Salish clam baskets.
Immigrant Tree.  Your family tree is older than the giant redwoods.  Through the many branches of maritime trade, blue and white porcelain was passed down from China to other cultures, finding an enduring legacy in the distinctive Danish patterns of Royal Copenhagen.  Traditional embroidery of Telemark, Norway sows the seeds of Immigrant Tree’s flower motif.
New Growth Tree.  Inarching unites two trees without separating either from its roots.  The trunk of New Growth Tree is a Norwegian Maple first planted at the inception of Bergen Place Park in 1975. 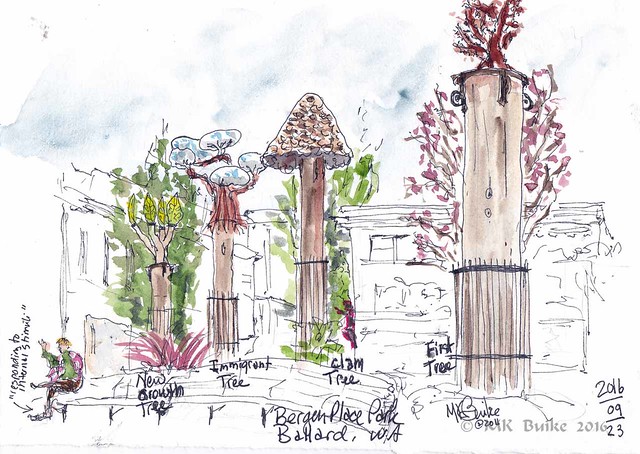 It was just a bit concerning that during the entire time I sketched, a man was pacing, yelling and gesturing.  He was obviously “responding to internal stimuli,” as we say.  I have had contact with psychotic people most of my career and my gut told me he was not a danger.  Still, this was not the moderately controlled situation of the hospital, so I kept watch on him out of the corner of my eye.  I chose to use my waterbrush rather than set out a container of water and all so that I could leave quickly if need be.

A group of young mothers came jogging through and then parked the strollers for some exercises.  They moved on but were back for a bit of yoga before I was finished.

I wandered the streets of this part of Ballard. There are a lot of interesting restaurants and shops.  Eventually I settled down to sketch this life sized Great Dane sculpture.  It started to rain a little harder.  I had just read Marc Taro Holms’ blog post about sketching in the rain   It was a light rain so I could cant my coroplast drawing board over the page to shelter it. 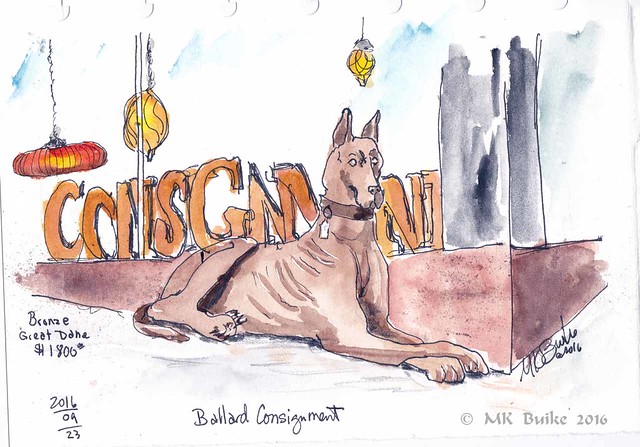