Books and Drinking and Drawing

Posted on December 4, 2016 by redharparts

After sketching in Sumner, I drove back north in order to attend the talk and book signing at the Daniel Smith mothership.  Gabi Campanario talked about his books: The Art of Urban Sketching, People and Motion, and Architecture and Cityscapes.  Then Stephanie Bower spoke about her book, Understanding Perspective.  Despite having sketched with USk Seattle for almost 5 years, I don’t think I’d heard Gabi tell the story of how he founded Urban Sketchers.  I feel very fortunate to live where this all started and to have the inspiration and example of so many wonderful artists in our group.

After about an hour they settled down to sign books.

Tina Koyama took the opportunity to sketch as they signed.

As they continued to sign, us sketchers moved across the street for the second part of the event:  the Drink and Draw at Schooner EXACT Brewing Company.

Everyone was busy drinking, drawing and talking.  It was a very fun event.

I used my pocket sketchbook to make some quick pencil sketches. I also had only water as I do not handle DUI well.       (DUI = Drawing under the influence… coined by Tina) 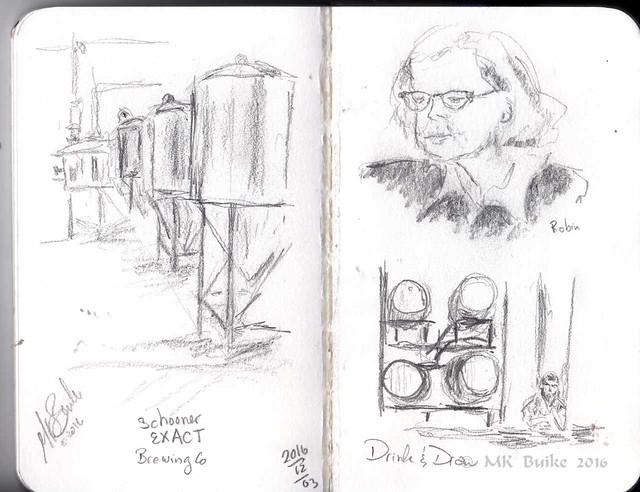 1 Response to Books and Drinking and Drawing