This was the kick off for Urban Sketchers “10 years x 10 classes” or simply,  “10×10” series.  This is the 10th anniversary year for Urban Sketchers.  To commemorate, they are sponsoring 10 workshops, each group in one of many locations around the world.

So today the USk founder, Gabi Campanario led off the series with his “Pocket Urban Sketching” workshop in Seattle.  We met at what may be one of the quintessential Seattle places: the Amazon campus.  We were fortunate it was only chilly but not raining!  I’d dressed with 4 layers plus hat & gloves.

Gabi first gave a demo of his first lesson: mixing several sketches in one spread using a concept of large, medium and small images. This in a small Stillman and Birn soft cover sketchbook (about 3.5 x 5.5 inches closed).  (I used my own Beta version, but Stillman and Birn kindly donated a supply of Alphas & Zetas for the workshop!). Here we were around the Amazon plaza nicknamed “the Doppler plaza” for the adjacent building.  This per Shawn, an Amazon employee, our intrepid guide and “TA” for Gabi.

Gabi does a demonstration sketch

I chose the building across the street which reflected another behind me for the larger sketch.  The medium one was an interesting rain water drain.  Then the smallest was the sign for Skillet.  Discussing it with Gabi, I realized I could have focused in even more as it was the cast iron pans in the sign in which I was most interested, so I could have left off the section of roof. 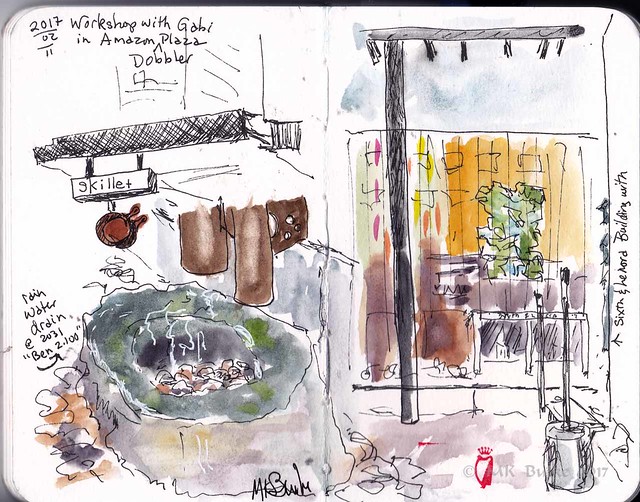 We had a sketchbook “throw down”, just as we do at the end of USk sketch outings.  Gabi discussed the sketches and we asked questions.

The next lesson involved sketching an entire city scape scene. Again, Gabi gave a short demo, discussing how he lays out the scene in the book.  It’s all about that first line!

He even added the police van that stopped in front of us for about 15 seconds!

I really wanted to sketch the view with the Space Needle and the biospheres but I was tired of standing.  So I found a bench across the street and sketched what was in front of me, including the cars and the small tree. 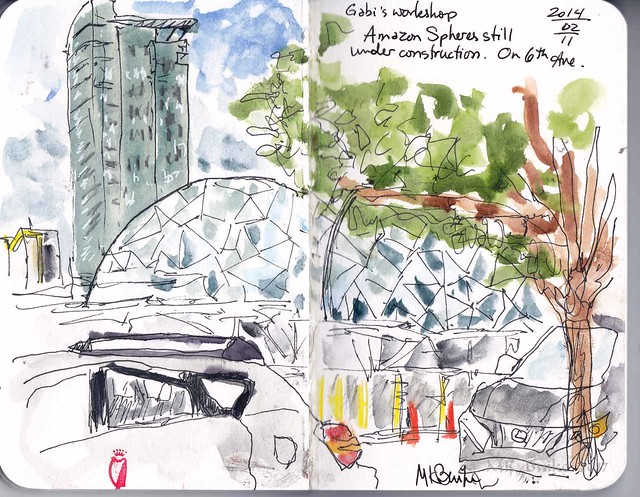 It was a rewarding workshop and it has inspired me to use this tiny format more.  I can actually get an entire scene across the page!

We had lunch together but I didn’t stay long after.  I’d left my car with a flat tire at the Tukwila Light Rail park & ride.  So I left to deal with it.  Sarah and Kay, who live near me, kindly gave me a ride back there.  Unfortunately, the tire was a loss but it took the shop less than an hour to replace it.  I had time for another sketch… another full page spread! 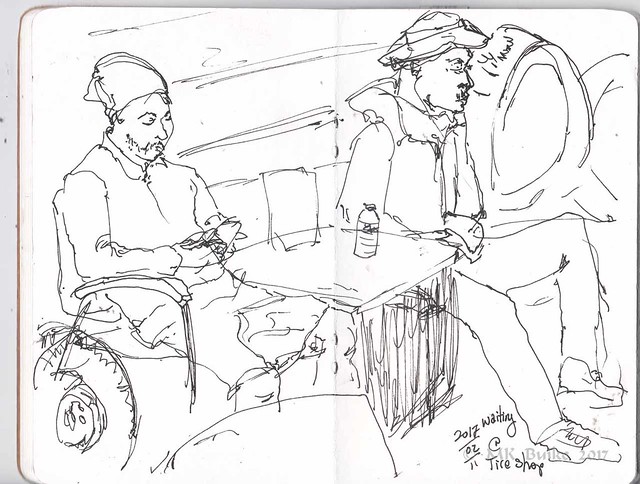