After two beautiful days of sun and relatively warm weather, it was just too much to ask for it to continue for our sketch outing to Foss Waterway Seaport museum.  We’ve sketched there before.  Though it is a large place with many artifacts, it just does not interest me that much.

Dee is dwarfed by this massive whale skull!

But today I was interested in seeing the whale skeleton I’d heard the students at a local high school had assembled as a class project.  The “Stadium High School Articulation Team” put together this Humpback Whale!  It hangs dramatically from the ceiling and creates an equally dramatic shadow. 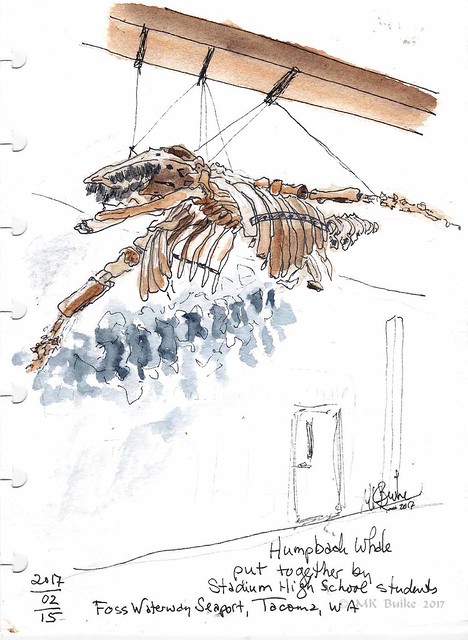 Once I finished it, there was still quite a bit of time left.  I wandered about trying out different compositions of collections in my head. 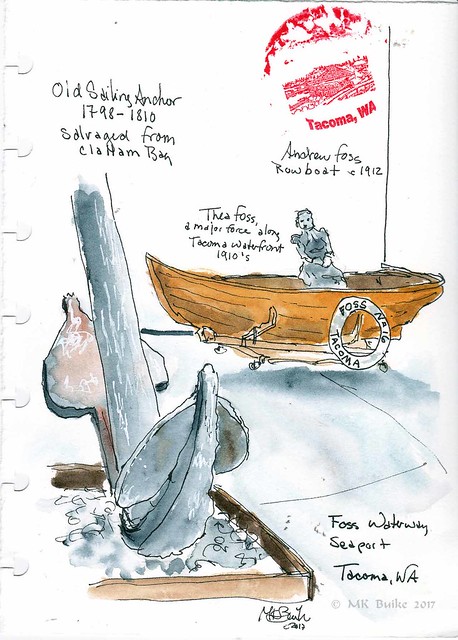 Born in Michigan. Attended undergrad and graduate universities there. I've lived in England, Germany, Southern California and now Washington (state). I'm a retired Medical Social Worker with a past specialty in Oncology. I've enjoyed exploring historical re-creation through the SCA. I costume in several fandoms. Lately I've returned to Art and have taken up Urban Sketching, a version of en plein air painting.
View all posts by redharparts →
This entry was posted in Sketch Crawl, Sketches, Urban Sketchers and tagged Foss Waterway, Tacoma, WA, watercolor. Bookmark the permalink.