Cherry Blossoms in the Sun

This seemed the best day of the week to plan an outing to see and sketch the Cherry Tree blossoms on the 80y/o trees in the University of Washington (UW) Quad.  The weather was predicted to be warm-ish (high 50’s or even 60 degrees) and sunny.  I made plans with Feather, another sketcher, to travel by light rail to the new UW station just south of the Quad.  This was two weeks later than last year.

There were so many people!

I plopped myself down on the grass near a group of young women having a traditional Japanese celebration – Hanami.   I enjoyed their traditional music while I sketched. 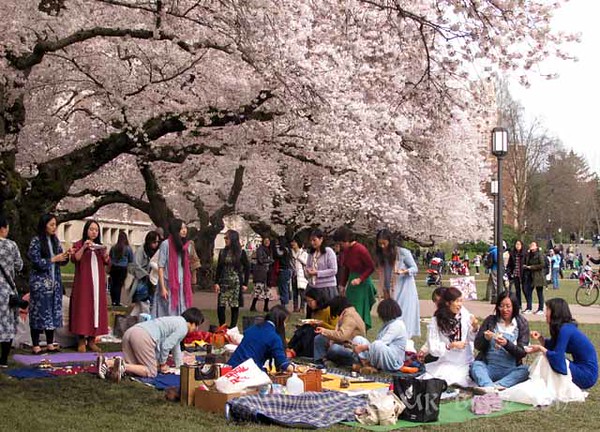 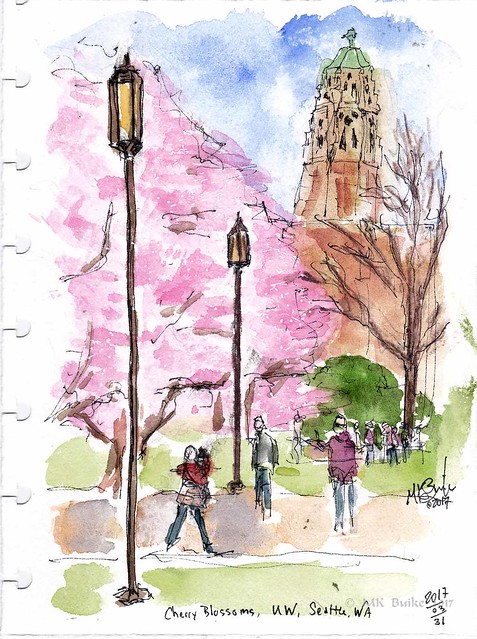 As I wandered looking for either another sketching venue or Feather, I ran into Tina!  So we had an impromptu sketchbook “throw-down” and took a group photo (rather, Tina took a group selfie).

Born in Michigan. Attended undergrad and graduate universities there. I've lived in England, Germany, Southern California and now Washington (state). I'm a retired Medical Social Worker with a past specialty in Oncology. I've enjoyed exploring historical re-creation through the SCA. I costume in several fandoms. Lately I've returned to Art and have taken up Urban Sketching, a version of en plein air painting.
View all posts by redharparts →
This entry was posted in Sketch Crawl, Sketches, Urban Sketchers and tagged cherry trees, Seattle, University of Washington, WA, watercolor. Bookmark the permalink.

2 Responses to Cherry Blossoms in the Sun