I’ve been looking forward to this for quite a while! With the new large classroom this year there were, I think, even more vendors.

I think I encountered at least 10 Urban Sketchers from both Seattle and Tacoma groups.

Michael met us at the door with the Door prize passports. They handled it differently than last year.  I thought it was a better way to do it.  Last year the drawings happened during the show and I couldn’t hear the announcements.  This year, get 12 initials from vendors to be entered, put name and contact info on the form and the drawings will be Sunday or Monday. 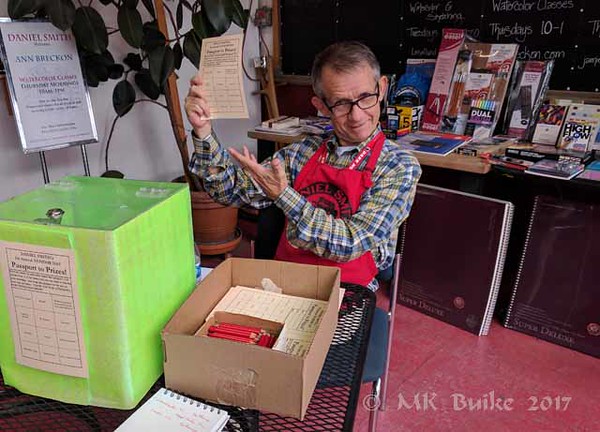 And what door prizes they had!!

While I assume the Daniel Smith staff could answer most of my questions, it was still interesting to be able to talk to brand experts.

For example, I learned new Strathmore Vision sketchbooks contain paper that is between Series 200 and 300. This is not usually what I want to use. What’s different about them is that there is a second, hard cover underneath the “fly sheet”. It’s plain and can be painted or decorated as the owner pleases.

“World’s Finest Watercolor Brush”. From the reviews I’ve read by others, that’s probably true. This one comes in its own box and lists for $234. 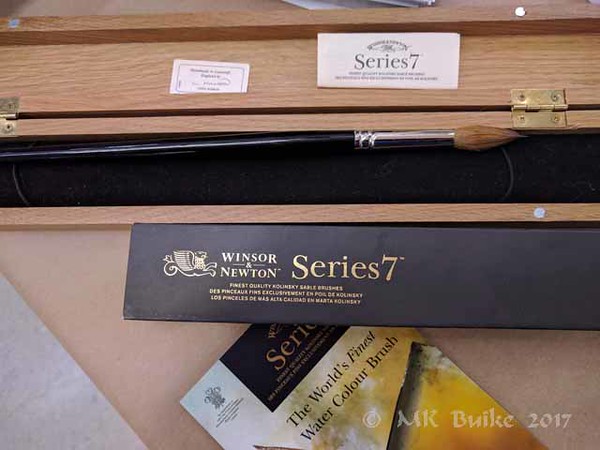 I talked to the vendor about the new(ish) Winsor Newton watercolor pens.

Gary shows off the new Grumbacher sketchbooks with “in and out” pages. They are removable. It’s similar to my Levenger Circa disc bound system but without the need to own a punch. Yeah, I bought one! 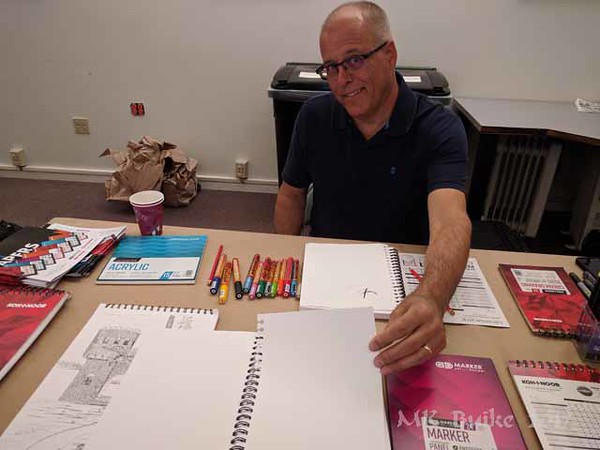 Don Colley showed Faber Castell PITT pens in such a way that I am fascinated. I’ve been to one of his workshops.  Maybe I want to switch to this medium. Would it be less to carry? I was so engrossed in his sketchbooks I forgot to take a photo. I’m very tempted and might go back to buy some tomorrow as the Daniel Smith 20% off entire purchase sale lasts through the weekend.

With the 20% off entire purchase, I bought some things.  A couple were new things to try and a few were items I just needed replacements.

L to R:  that new Grumbacher sketchbook with removable/replaceable pages ($10.39 before discount).  Molotow liquid mask pen.  The new da Vinci Casaneo synthetic brush line: #2 Quill.  This was the last one and Tom said they’d sold dozens.  I told him the usual quill brush I used and he said he thought this one was better!  ($27 before discount),  Faber Castell PITT artist pen in warm grey.  Quinacridone Gold (these are the last tubes of the single pigment Daniel Smith bought from the auto industry.  They’ve now formulated their own).  Pentel Arts Hybrid Technica pen (.05) given to me by one of the vendors.

Born in Michigan. Attended undergrad and graduate universities there. I've lived in England, Germany, Southern California and now Washington (state). I'm a retired Medical Social Worker with a past specialty in Oncology. I've enjoyed exploring historical re-creation through the SCA. I costume in several fandoms. Lately I've returned to Art and have taken up Urban Sketching, a version of en plein air painting.
View all posts by redharparts →
This entry was posted in Class, KIt and Supplies and tagged da Vinci, Daniel Smith, Faber Castell, Grumbacher, Seattle, Vendor Day 2017, WA. Bookmark the permalink.