On Sunday, October 22, we were still in Portland.  Before leaving, I made a dash to pick up some VooDoo Doughnuts.  I found these mobile units in the parking lot. 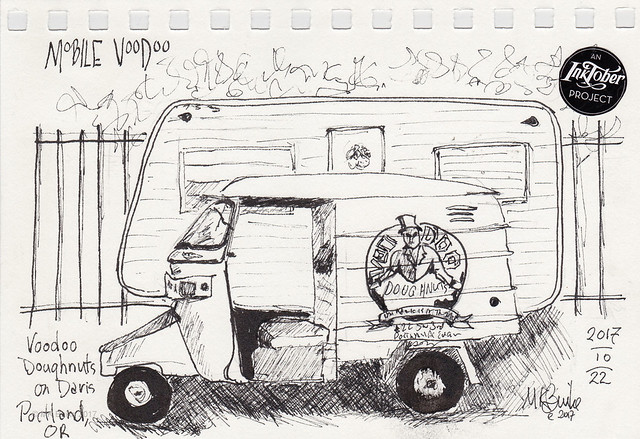 On Monday, 23 October, I used a blank page I’d had stamped at the “End of the Trail” Oregon Interpretive Center in Oregon City last Friday.  I drew from my photo of one of the exhibits there. 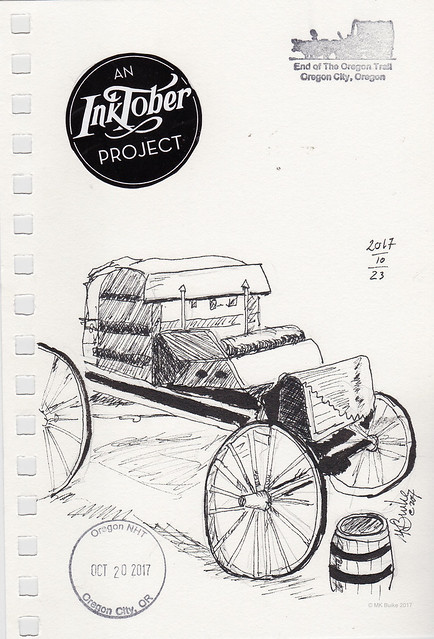 For Tuesday, Oct 24, I drew from a newspaper ad I’d saved.  There are 3 dancers wearing coronets in the original photo (by Angela Sterling) but I chose the center one as I liked her coronet the best.

I did most of this with a dip pen but after I got a second large ink blob on it, I switched back to fountain pen.  I cleaned up the blob with wite-out and then edited it out some more in Photoshop.  Grrr.  I need to do some practice to figure out how those blobs happen. 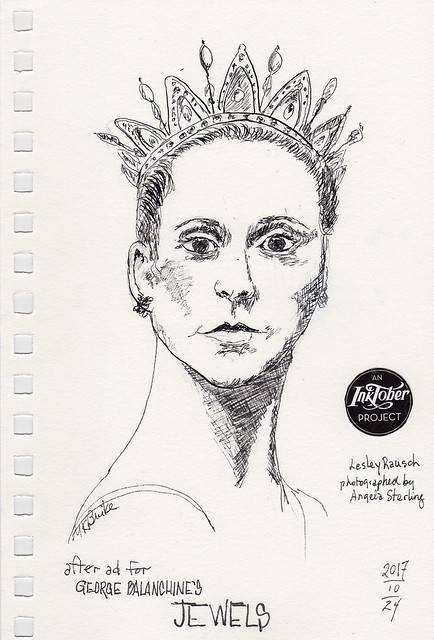 On Wednesday, October 25th, I was on my way to the Andrew Wyeth exhibit at the Seattle Museum of Art (SAM).  I had 5 minutes before the bus arrived and I liked those colorful trees.  I quickly drew the scene.  I refined it later, adding hatched shadows and the bit of color. 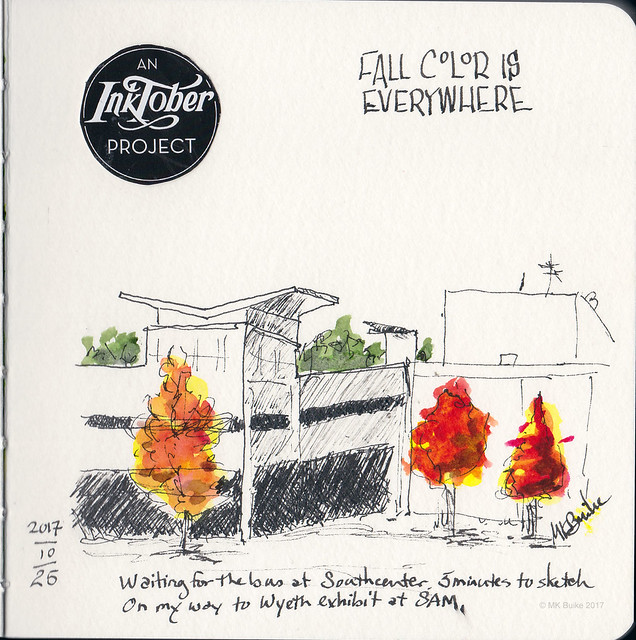 BTW, the Wyeth exhibit is excellent.  While I liked his work a lot when I was in High School, I hadn’t really researched it, or him, much (no internet in those days).  I was surprised by some of his watercolors.

Thursday, 26 October and Halloween approaches.  I’d saved this photo I found a couple weeks ago and now I don’t remember where I got it.  I’ve interpreted it in ink with a pop of color for the pumpkin. 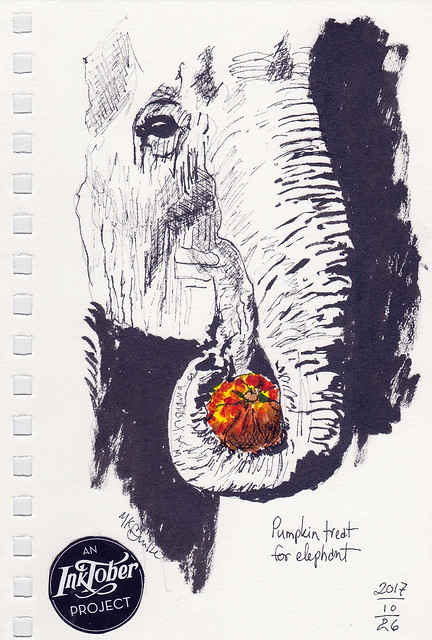 On Saturday, 27 October I was at Swanson’s Nursery with Urban Sketchers Seattle.  Before I painted it, I photographed the ink drawing of these topiary deer for Inktober. 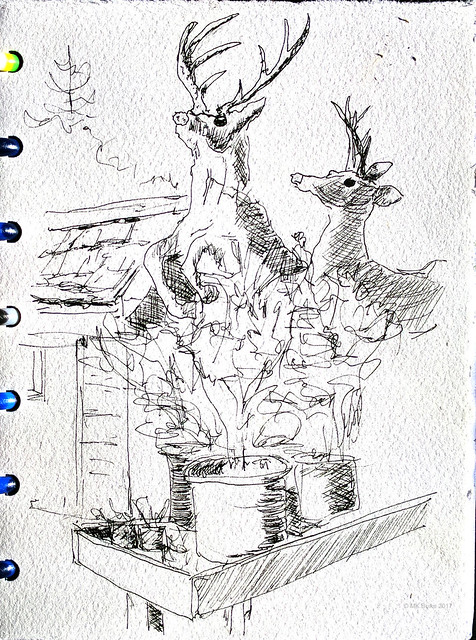 It’s more pumpkins for Inktober #28 on Saturday, October 28.  These are from my photo taken at Watson’s Nursery in Puyallup last week.  The ones in front where white gourds with decorative vegetation attached to the top. 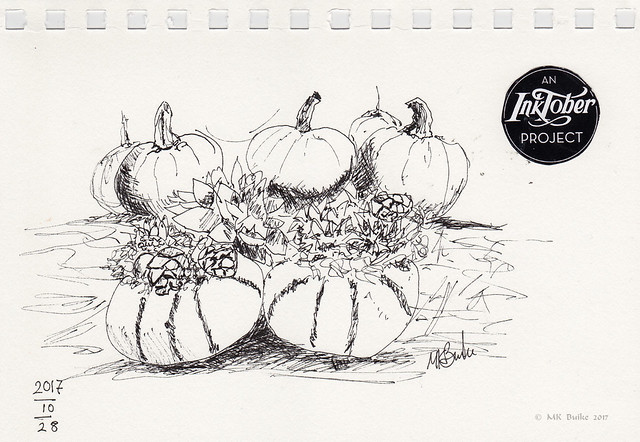 On Sunday, October 29, The Museum of Flight became the Museum of Fright.  I volunteered as the photographer and later did this sketch from one of my photos. This is the Living Computer Museum’s table with old computers and a robot. 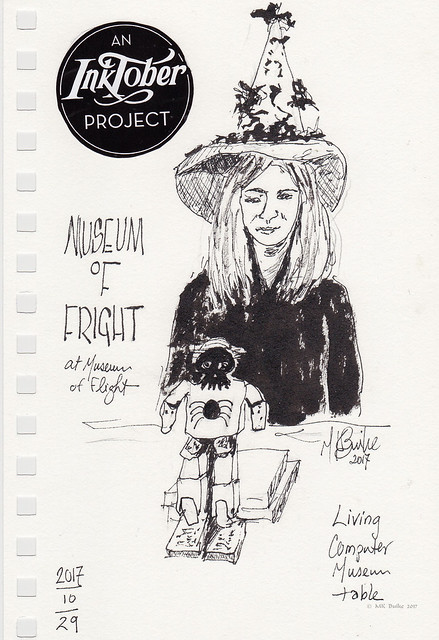 Next to last… feeding my Star Wars fandom.  This is someone from my Rebel Legion Base (Alpha Base).  Jim used to be a Stormtrooper in the 501st Legio, Garrison Titan but now he’s Poe Dameron. The character is in Ep. VII, The Force Awakens.  It would seem we converted one from the dark side. 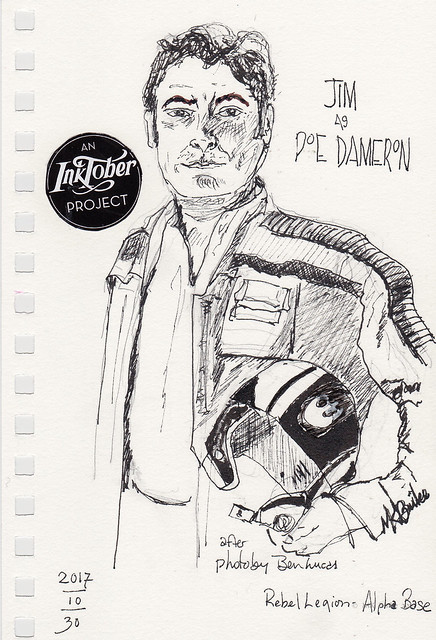 Last day of Inktober!  Star Wars and Halloween!  This large Yoda plushie is ready to greet the Trick or Treaters.  The porch decor is Star Wars this year and it’s time to go get dressed! 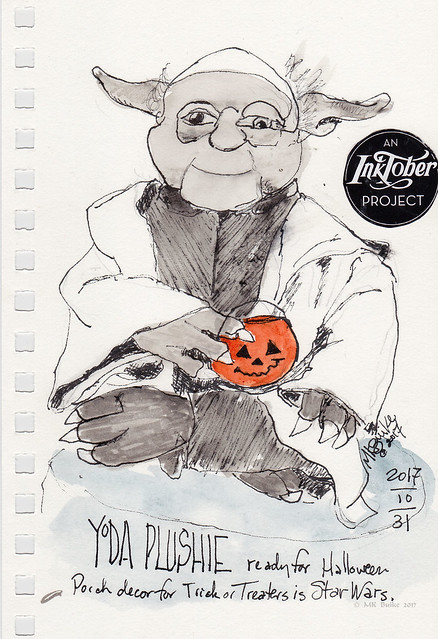 Born in Michigan. Attended undergrad and graduate universities there. I've lived in England, Germany, Southern California and now Washington (state). I'm a retired Medical Social Worker with a past specialty in Oncology. I've enjoyed exploring historical re-creation through the SCA. I costume in several fandoms. Lately I've returned to Art and have taken up Urban Sketching, a version of en plein air painting.
View all posts by redharparts →
This entry was posted in Daily Sketches, Sketches and tagged #inktober2017, Inktobber, Inktober. Bookmark the permalink.