NASW CEU’s at UW for my LICSW

Yesterday I earned 6 hours of Continuing Education Units (CEU’s) at the University of Washington (UW), sponsored by the WA chapter of the National Association of Social Workers (NASW).   I’ve been an NASW member since about 1973.  The CEU’s are needed to keep my license as a Licensed Independent Clinical Social Worker  (LICSW).

The topic was “Social Work in a Digital World”.  Do you accept a request to be Facebook friends with you psychotherapy client?  NO!  Do you search your client on Google.  No, except under very limited circumstances.  There are lots of pitfalls, legally and ethically, for mental health practitioners in this digital age.  We heard stories of how some ended up in prison whose prosecution was aided by their digital footprint.

Despite the fact that I last attended this same seminar 4 years ago, most of it wasn’t really new to me.  There have been many changes to law and codes though.  During a long spell in which I wasn’t taking notes, I drew some of the others down my row of seats.

My license is in “retired” status and I’m just a little relieved I’m not in active practice after this.  I would certainly not have a Facebook account if I was! 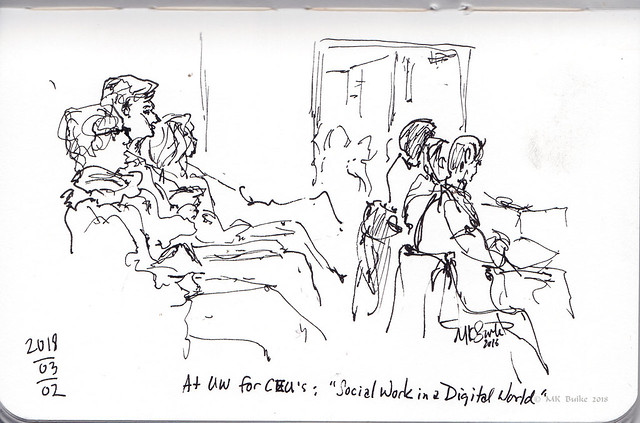 Born in Michigan. Attended undergrad and graduate universities there. I've lived in England, Germany, Southern California and now Washington (state). I'm a retired Medical Social Worker with a past specialty in Oncology. I've enjoyed exploring historical re-creation through the SCA. I costume in several fandoms. Lately I've returned to Art and have taken up Urban Sketching, a version of en plein air painting.
View all posts by redharparts →
This entry was posted in Sketches and tagged CEU, Field Notes, ink, UW. Bookmark the permalink.

1 Response to NASW CEU’s at UW for my LICSW