Silence in the library

Urban Sketchers Tacoma met at the UW Tacoma library yesterday.  It was such a sunny day, though still a bit chilly, that some chose to sketch outside.

It was so nice that we displayed our sketches and took our group photo outside at the end of the outing.

Thanks to Scott for taking the photo.

I really wanted to sketch the interior machinery in the silent section of the library.  This is the view that defeated me.

So I moved on to wander across the sky bridge to the Tioga building, where I found this odd sculpture in the window. 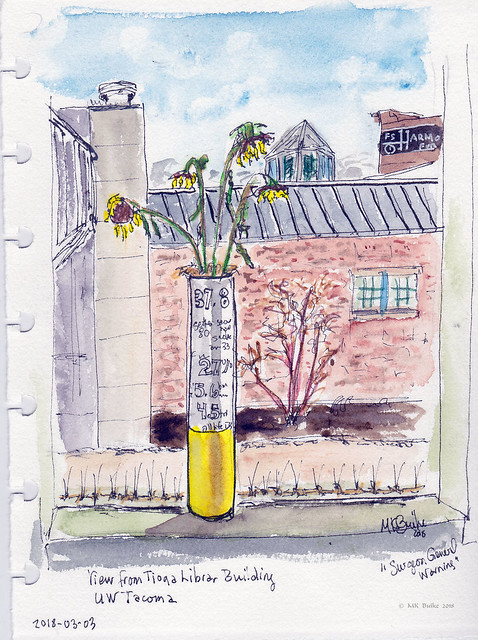 I next joined several sketchers in the Chihuly Room, which was another “silent” room.  Most of us there were sketching the Chinook Red Chandelier. 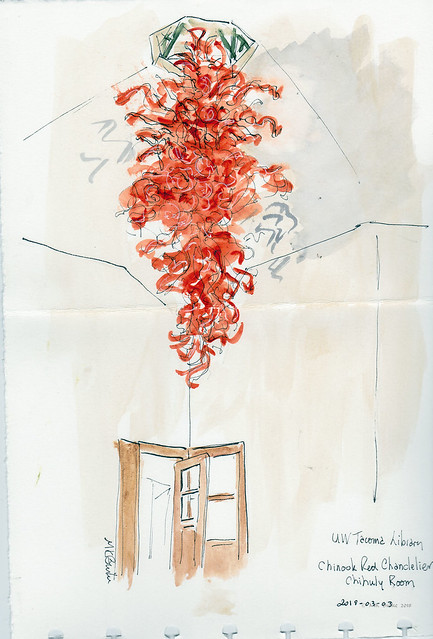 Born in Michigan. Attended undergrad and graduate universities there. I've lived in England, Germany, Southern California and now Washington (state). I'm a retired Medical Social Worker with a past specialty in Oncology. I've enjoyed exploring historical re-creation through the SCA. I costume in several fandoms. Lately I've returned to Art and have taken up Urban Sketching, a version of en plein air painting.
View all posts by redharparts →
This entry was posted in Sketch Crawl, Sketches, Urban Sketchers and tagged Library, UW Tacoma, watercolor. Bookmark the permalink.