One of our own

Roy DeLeon lives north but sketches with Urban Sketchers Tacoma. We haven’t seen him much lately, though, because he’s been devoting so much of his time to illustrating this series of children’s books. The first one, The Pope’s Cat, was just released. His book signing was hosted by The Neverending Bookshop, a local independent store in Bothell.

The author is Jon Sweeney and Roy is the illustrator.  Get it from your favorite independent book seller.   If you want to get it right now, here is the listing on Seattle independent, Elliot Bay.     What I see on the Elliot Bay listing but didn’t know before: It is released for the 5th Anniversary of the election of Pope Francis

USk Tacoma showed up to support Roy. We enjoyed his discussion on his process of illustration, which was completely digital, using an iPad, Procreate app and an Apple pencil. He also shared some Easter Eggs in the book.  The husband of one of the sketchers was a model for some of the sketches of the Pope!

Roy and Eli with the page open to the illustration I think most looks like him (page 51).

Instead of our sketchbooks, we’re holding Roy’s book.

I managed a very quick sketch while he was talking. 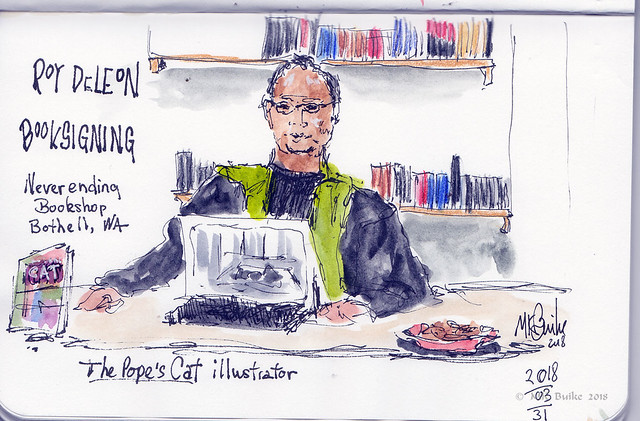