Arghhh.   I missed it… again!  I went to the Museum of Flight on Monday to check on the status of reconstruction of the B-52.  No big cranes.  I’d planned to go again yesterday (Tuesday) in the late afternoon, before an evening meeting at the Museum.  But about 1500, Museum posted to their Facebook page photos of the wings being installed.

I went over as planned and sketched what I saw.    I decided to add an insert, sketched from a photo. 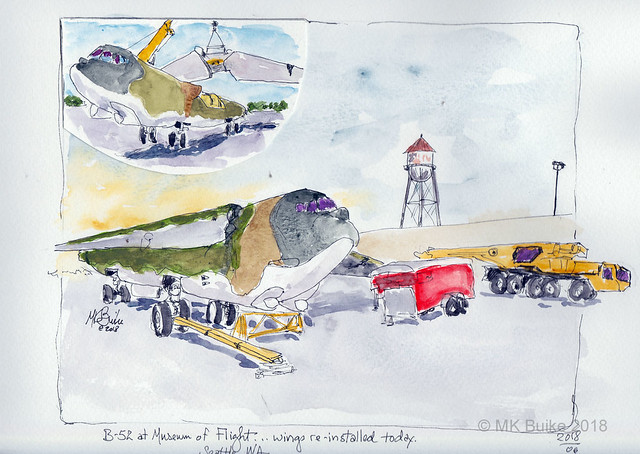 There is still one crane there, on the right of my sketch.  I have a meeting in downtown Seattle today.   I think they might install the tail with that crane.  I’m going to check on the status in the morning.   I’ll leave my car in the back of the Museum and take the bus from there into the city.  Then I’ll be back in mid-afternoon to check again!  That’s my plan.  I thought this would be easier with the aircraft closer to home.

BTW, the meeting at the Museum was our regular All Volunteer meeting.  A very impressive group of new docents graduated.  Their bio’s included: pilot during Viet Nam war; pilot for Angel Flight (charity that flies ill people to doctor/hospital); first female pilot for an airline; Senior Executive Service FAA air traffic control; MS and PhD from MIT;  I was in awe.

The presentation was by Museum staff, Becca Harmsen:  “Warts and All.  Interpretation of War in Museums”.  Her talk was based on her Master’s Thesis, which, of course, I have found on line here. She outlined the difference between an exhibit which interprets and analyzes the war and one which commemorates.  The Museum of Flight has chosen to separate the two.  The commemoration will be the park on the far west side of campus.  There is an exhibit interpreting the history of the war already installed inside the Great Gallery of the Museum on the East campus.

I am cognizant of the possibility of strong emotional reactions to the Viet Nam Veterans commemorative park, of which this B-52 will be a part.   One docent shared her experience while giving a tour of the B-17.  A visitor on the tour said, “You tried to kill me”.  He was a child in Germany when the B-17 bombed his city.  I think her response was one to model:  “War is terrible.  Innocent people are harmed and killed.  I would be happy to talk more but for now, I’d like to continue with the tour”.  Afterwards, she said he told her it was the best tour he’d ever experienced.

Born in Michigan. Attended undergrad and graduate universities there. I've lived in England, Germany, Southern California and now Washington (state). I'm a retired Medical Social Worker with a past specialty in Oncology. I've enjoyed exploring historical re-creation through the SCA. I costume in several fandoms. Lately I've returned to Art and have taken up Urban Sketching, a version of en plein air painting.
View all posts by redharparts →
This entry was posted in Sketches, Urban Sketchers and tagged B-52, ink, Museum of Flight, Project Welcome Home, PWH, watercolor. Bookmark the permalink.

1 Response to Missed it. Again!