The first time Urban Sketchers Seattle met at the McMenamins Anderson School in Bothell, it was relatively newly opened.  It was also cold and raining.  At the time, sketchers said they’d like to return when the weather was better.  We scheduled that return visit for today and the weather was perfect.

About 25 sketchers joined us, including some new people and those who hadn’t been in a while.

At least one sketcher is missing.

As I gave my carpool partners a tour around the grounds, I noticed this archway I don’t remember seeing before.  I sketched it from the upper side as a private party was using the patio below.  I got the “McMenamins Passport” stamp from the hotel front desk. 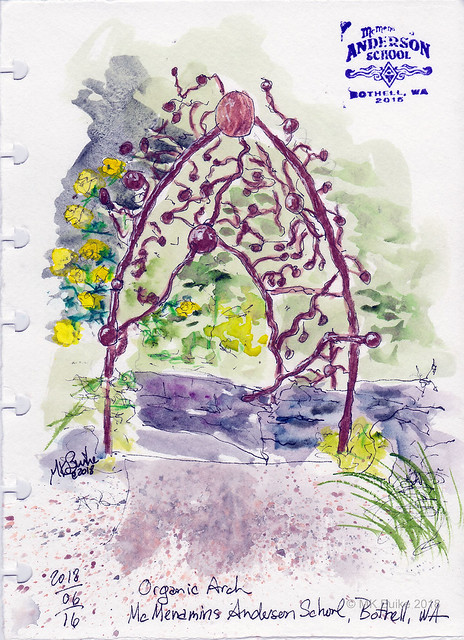 I was delighted my friend Judi joined us from Whidbey Island.  I sat next to her to sketch and chat so sketched what was in my view.  (also her blog is here) 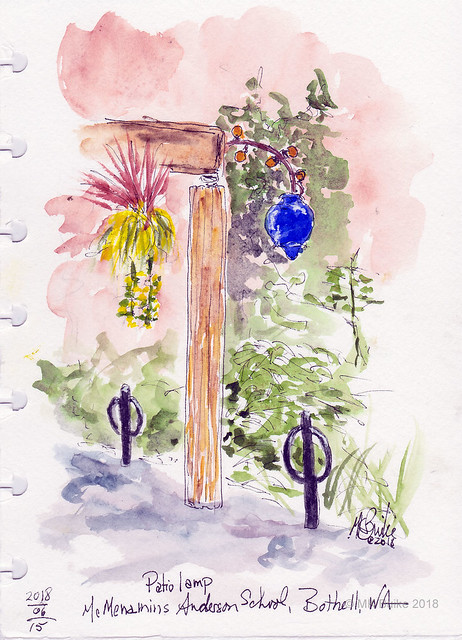 Born in Michigan. Attended undergrad and graduate universities there. I've lived in England, Germany, Southern California and now Washington (state). I'm a retired Medical Social Worker with a past specialty in Oncology. I've enjoyed exploring historical re-creation through the SCA. I costume in several fandoms. Lately I've returned to Art and have taken up Urban Sketching, a version of en plein air painting.
View all posts by redharparts →
This entry was posted in Sketch Crawl, Sketches, Urban Sketchers and tagged Anderson School, Bothell, ink, McMenamins, WA, watercolor. Bookmark the permalink.