Worldwide Aircraft Recovery continues the reconstruction of the Museum of Flight’s B-52. Today, finally, I got to witness something large held up by a crane! It was the installation of the horizontal stabilizers.

Yesterday I’d encountered Tom, the manager of the Museum’s Restoration program. He told me they’d start the installation in the morning. So I was there by 9:30 am. So was Tom. He motioned to me to come through the fence and told me I could sit inside the enclosure to sketch! Thank you!!

So finally I get to see something large on a crane installed!

I also tried out my new mix for the darker camo color. I like it as it is flat rather than granulating.

Nearly done, though it stayed like this the rest of the day.  I returned later and by 4pm, they were in the same place.  I was hoping they might have moved on to the vertical stabilizer (tail fin).

I did my sketch earlier in the process as the stabilizers were suspended below the back of the B-52. 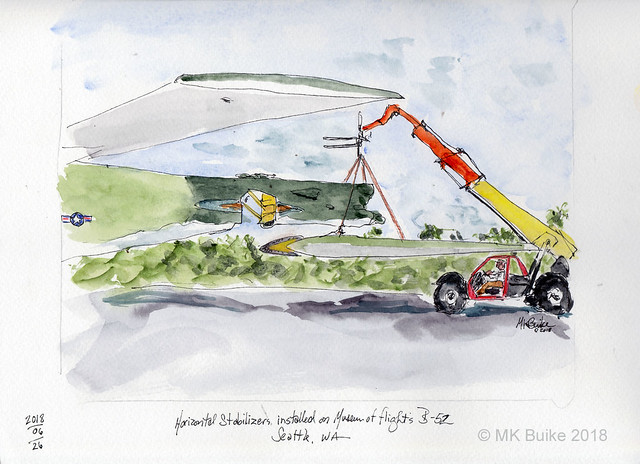 More photos
The album starts with photos of the staff cleaning the “Connie” in front of the Museum.

Born in Michigan. Attended undergrad and graduate universities there. I've lived in England, Germany, Southern California and now Washington (state). I'm a retired Medical Social Worker with a past specialty in Oncology. I've enjoyed exploring historical re-creation through the SCA. I costume in several fandoms. Lately I've returned to Art and have taken up Urban Sketching, a version of en plein air painting.
View all posts by redharparts →
This entry was posted in Sketches, Urban Sketchers and tagged B-52, ink, Midnight Express, Museum of Flight, Project Welcome Home, PWH, Seattle, WA, watercolor. Bookmark the permalink.