Since the horizontal stabilizers were installed yesterday, I thought perhaps the vertical one (the tall tail) might be installed today. Dropped by about 11am. There didn’t appear to be anything happening.

I went over to the East campus, to the “main” Museum. The Mountain was out and it seemed a good time to sketch the scene that has been on my mind for weeks, waiting for the Mountain. It is from the second story mock Air Traffic Control Tower looking toward the Boeing Military section. These are 767 Tankers.  And The Mountain is Rainier. 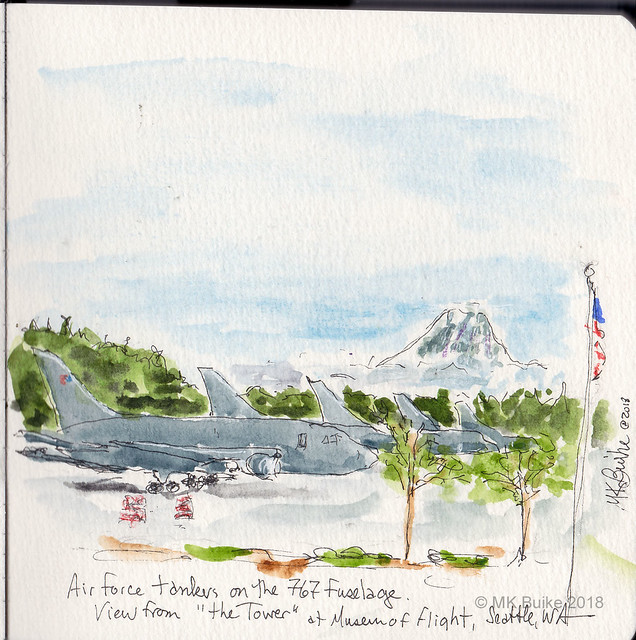 After lunch I went back over to West campus and the B-52 area. Even less going on. While I waited, I decided to sketch a view of the nose I’d noticed yesterday. 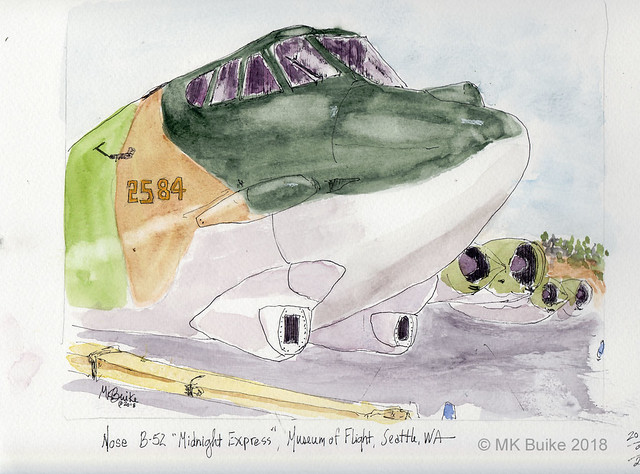 Heard from staff and crew that the tail will likely be installed tomorrow am. Drat! That’s the time for my shift. I’ll go early and hope for the best. If it is similar to the horizontal stabilizers installation, the vertical one will be supported by the crane for quite a while. If I don’t get it in the morning, hopefully I can get it at 1:30pm, after my shift.

Born in Michigan. Attended undergrad and graduate universities there. I've lived in England, Germany, Southern California and now Washington (state). I'm a retired Medical Social Worker with a past specialty in Oncology. I've enjoyed exploring historical re-creation through the SCA. I costume in several fandoms. Lately I've returned to Art and have taken up Urban Sketching, a version of en plein air painting.
View all posts by redharparts →
This entry was posted in Sketches, Urban Sketchers and tagged B-52, ink, Museum of Flight, Project Welcome Home, PWH, watercolor. Bookmark the permalink.