We left Sunday, 5 Aug and took 2 days to drive to Las Vegas.  The trip was uneventful and long and boring.  But we listened to many podcasts.  Once there, we attended BSides, the IT security conference.  It wasn’t as productive for me as last year’s was.  This year my favorite track focused on the Internet of Things.  Last year it was more medical.

I did a couple sketches.  First is the Key Note address by Jim Christy, talking about the DB Cooper cold case.  Seems there may be new information coming out soon! 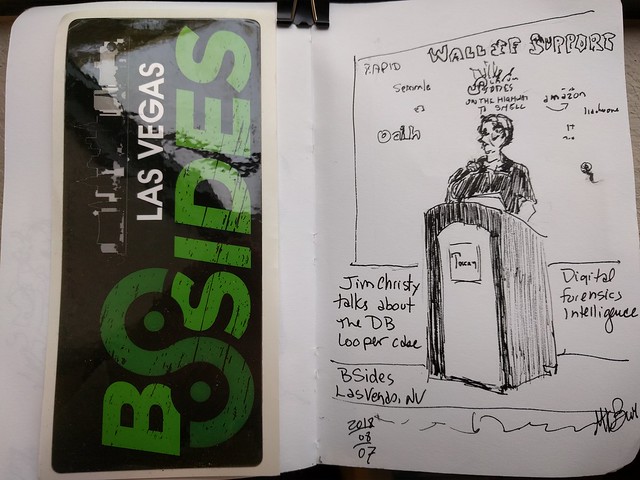 I sat in the “We are the Cavalry” track. It’s about “Security Researchers” (what white hat hackers call themselves these days) helping to make critical systems more secure.  These include health care, power, transportation, etc.   It was being live streamed.  I drew some of the people around me at various times. 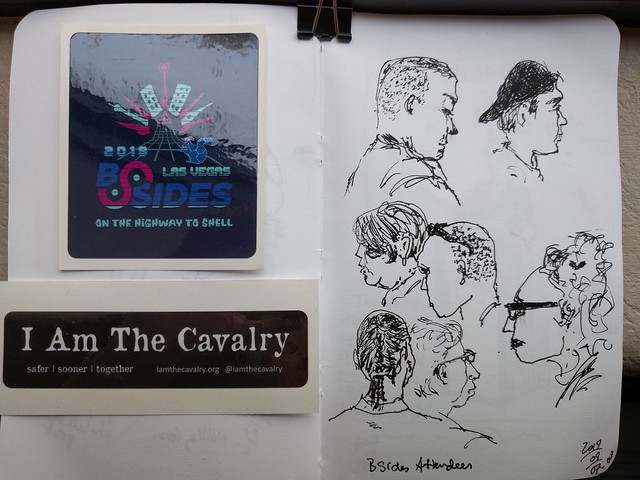 It was far too hot to sketch outside.  There is a Heat Advisory, which is saying something for Vegas.  They matched a high for the date of 112.  Ugh.

Once Bsides was over, I had a lot of free time.  Himself went on to attend the more intense and technical DefCon.  I stayed in the AC cool of the hotel room and watched some watercolor tutorials on painting water.  I also went through the handbook and watched tutorials on using Procreate on the iPad.  I’m not there yet and now need to practice.

I also worked on a commissioned piece and finished it.  I’ll not show it here now but will once it is delivered.

It was already at least 90 degrees at 6:30 am!  So I stayed in the comfort of the AC to sketch this scene through the window of the door. 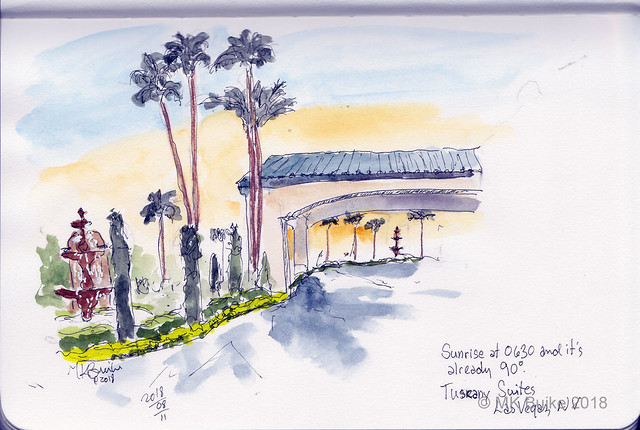 One highlight of the trip was the opportunity to join a sketch outing with Urban Sketchers Las Vegas!  They are the opposite of us in Seattle:  in the summer they meet indoors to be in air conditioning and out of the 100+ heat (it was about 108 that day)!   In the winter they sketch outside.  This meeting was at a branch library that also had an art museum.  I really enjoyed meeting them and the conversation during the “throw down”.

I sketched a montage.  These subjects are not actually adjacent to each other. 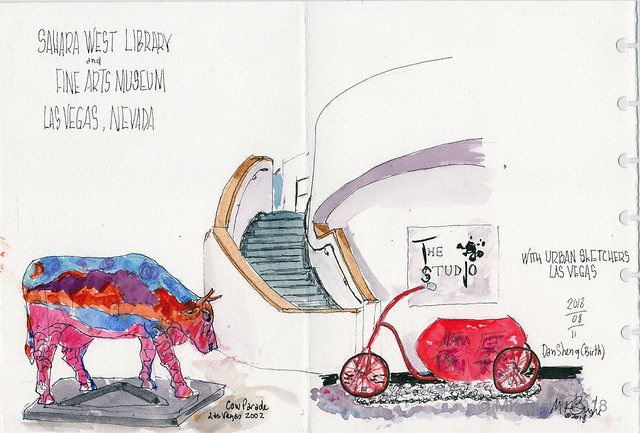 Himself has announced that after attending for 25 years this is his last Def Con. He even ran into the co-founder (Jeff- “Dark Tangent”) on the way out as the con ended.  Jeff said he thought there were only one to three people there that had attended that many in succession.

We played Cheryl Crow’s cover of “Leaving Las Vegas” as we drove out of town on Monday, 13 August.  I really do not enjoy LV and it is unlikely we will return since himself won’t be going to DefCon again.  I regret not seeing the Neon Museum but I just couldn’t bear an outdoor activity in 108-112 degrees!

The drive home was again long and uneventful.  It was however, very smokey from all the forest fires.  We listened to many more podcasts.

Born in Michigan. Attended undergrad and graduate universities there. I've lived in England, Germany, Southern California and now Washington (state). I'm a retired Medical Social Worker with a past specialty in Oncology. I've enjoyed exploring historical re-creation through the SCA. I costume in several fandoms. Lately I've returned to Art and have taken up Urban Sketching, a version of en plein air painting.
View all posts by redharparts →
This entry was posted in Sketches and tagged BSides, ink, Las Vegas, Nevada. Bookmark the permalink.