Nearly a year ago I registered and paid for this Illustrated Journaling workshop with Brenda Swenson. I like and admire her work so very much, especially her journal pages. She finally arrived at the mothership this week! That means the Seattle Daniel Smith store.

Two years ago I attended her Sketching Techniques in Watercolor workshop. Here’s my account:  https://redharparts.wordpress.com/2016/08/10/brenda-swenson-workshop/

My comments about this week’s workshop echo those I made then. If you ever have a chance to take one of her workshops, I highly recommend it.  Unfortunately, she won’t be back to Daniel Smiths Seattle until 2020.  But her blog already lists her schedule for 2019.

Some of the early exercises were similar, too. We did continuous line contour drawings of a selection of items brought by other attendees.

Much of her journaling work is done in a Stillman and Birn Beta. She described what a wonderful company they are… including a story of how they personally reached out to her during a difficult time. She details that in her blog.

She also makes her own spiral bound sketch books using Bockingford 140# cold press watercolor paper from Cheap Joe’s. I’d gotten some Bockingford 2 years ago and have barely used it. I didn’t think I liked it. But I used it during this workshop and it’s fine. I don’t remember what my problem was! However, I don’t really like to mail order my paper so I’ll likely continue to use the Legion Stonehenge Aqua sheets. Though Bockingford is about $3 cheaper per sheet…. might have to think about that.

On the first day we did contour drawings. In the afternoon we learned about the “format” which is the term Brenda uses to mean the line around a sketch that adds to the design and defines the space. We used a single selection from the various objects to create compositions which we also painted. We learned a really clever way to plan out the writing on a journal page. I’ll not steal Brenda’s thunder by sharing it so publicly here. But it was worth the price of admission! 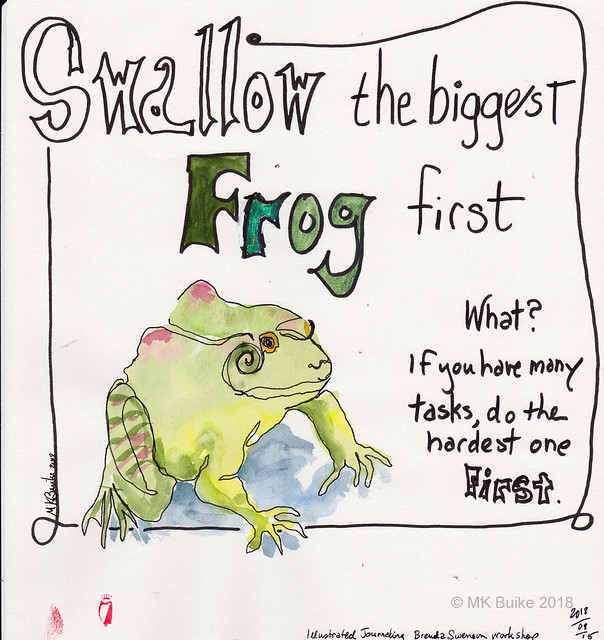 On day two we talked about tools and then made compositions that included a continuous line contour drawing of three objects with a format and lettering. Here are three versions of a layout I tried. 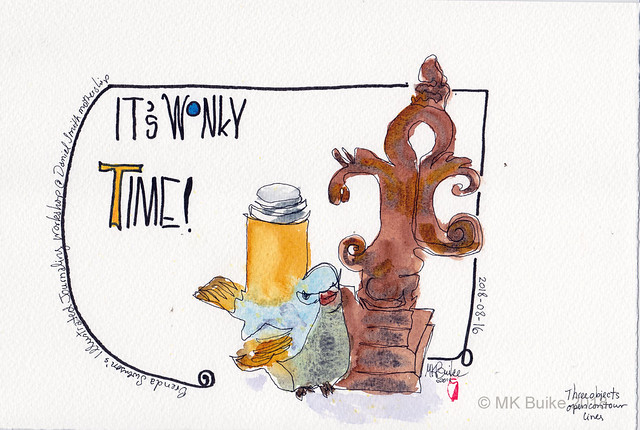 We also worked with combining photos into a single sketch.

On day three we used photos again but in a different way. All within a “format” with text. 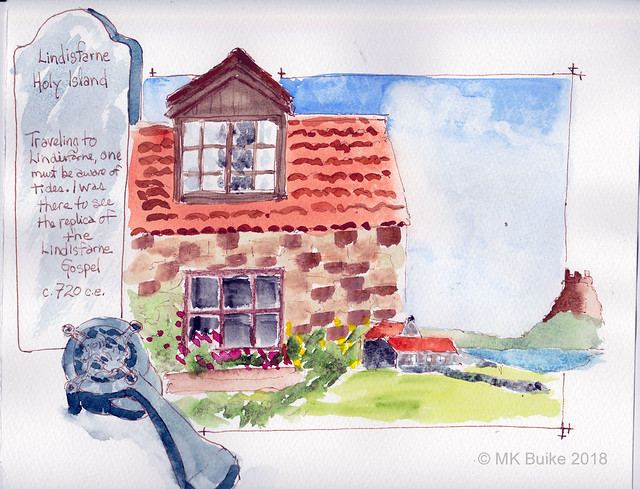 From my own photos of a trip to Lindisfarne. The Celtic Cross is an object from the table.

The final exercise was the one for which I’d been waiting as I had a plan. We were to bring one object with personal meaning. I brought my SCA Viscounty Coronet. Before the workshop even started I had an idea of what I wanted to do. I intended to sketch the coronet and include verses from “Burden of the Crown” by Master Balwin of Erebor. Because of my experience as Princess of Drachenwald, the song has great emotional significance. I used part of the lunch break to listen to the song before I started my drawing. It always brings me to tears. As I have been known to say: “I never cry at weddings. I cry at Coronations (and Peerage ceremonies)”. What I learned in the workshop helped me refine my design. 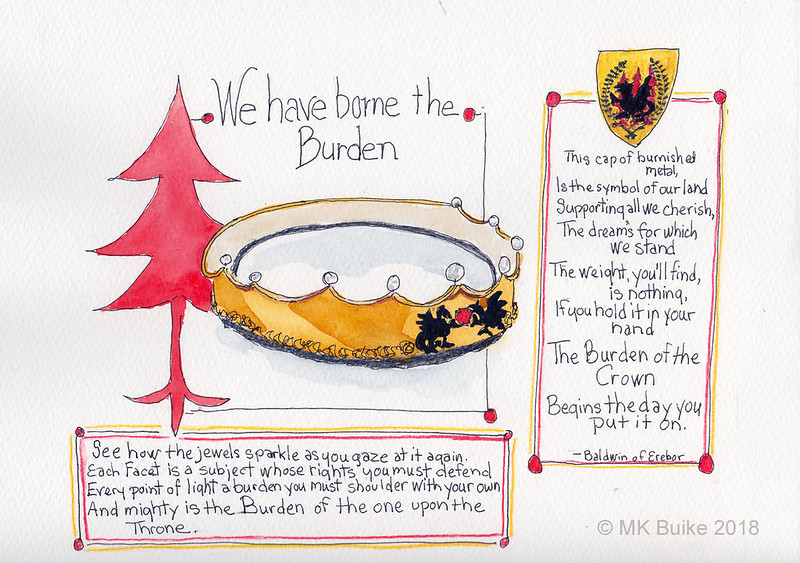 The “we” refers to himself and me as we reigned together as Prince and Princess.