We anticipated lots of sun and heat for the Urban Sketchers Seattle outing to Pier 66. It was also Hemp Fest * .  A 2000 passenger cruise ship was boarding so the area was very crowded with tourists pulling suitcases.

The pedestrian bridge offered a good variety of views of the area. The turn out was surprising… we had so many sketchers. We were also joined by Stephanie Bower’s workshop group.

I thought I might try to simplify the complex view of the cruise ship. I liked the red “66” figures, too. Despite the prediction for heat, I got a bit chilled in the shade will doing this sketch. A passerby stopped to look.  He told me this was a “small one”.  One docked yesterday was so much larger… the 9th largest in all the world.  This one seemed pretty huge to me.  With 2000 passengers, it’s as large as the town in which I grew up! 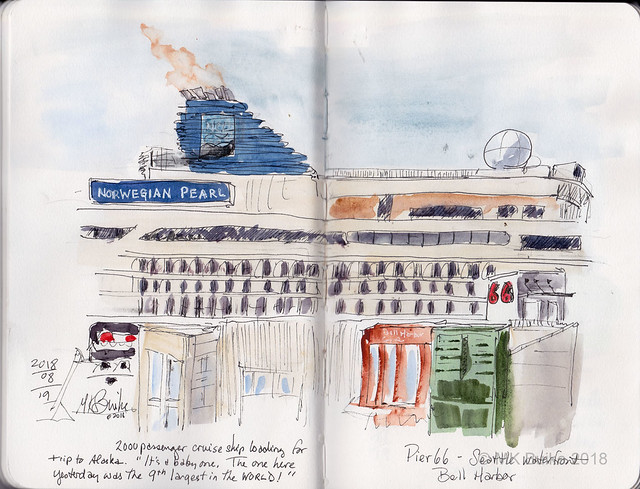 I always want to sketch the Space Needle if it’s in view. Sounders (our football/soccer team) lime green on two walls was a bonus. 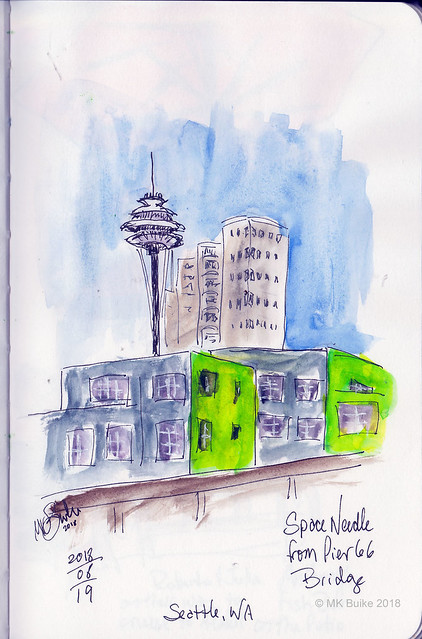 My final sketch of the morning is my favorite.  I liked the shade umbrellas on this patio, where I sat with a cold drink. The woman in this sketch turned around and then noticed me sketching. I showed it to her and we had a nice conversation. She’s from Idaho but now lives a distance north of Calgary, Alberta, Canada. She and the boy and the rest of the family will be on the cruise ship bound for Alaska. 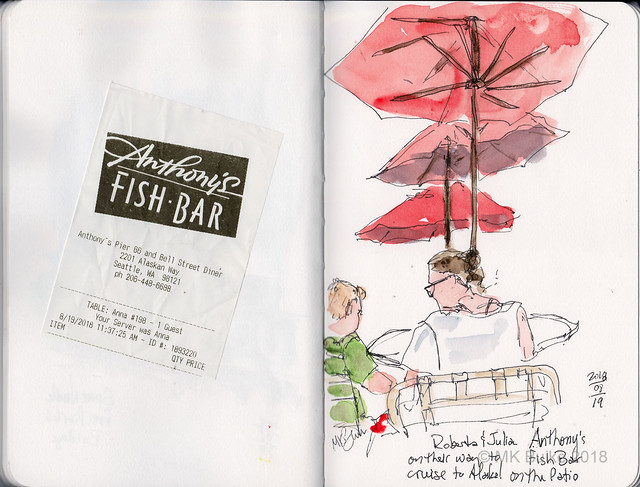 After the outing, I continued my sketching day. I continued on to Daniel Smith for Watercolor Social. I’d brought a lunch and ate at the patio table in the lower lobby while waiting for the activity to begin.

Jody brought a nice bowl of strawberries as a suggested subject. I drew this with only pencil – not my usual black ink – and painted it with my own palette. I didn’t try any new colors today.

What Daniel Smith watercolor best depicts the color of the strawberry? 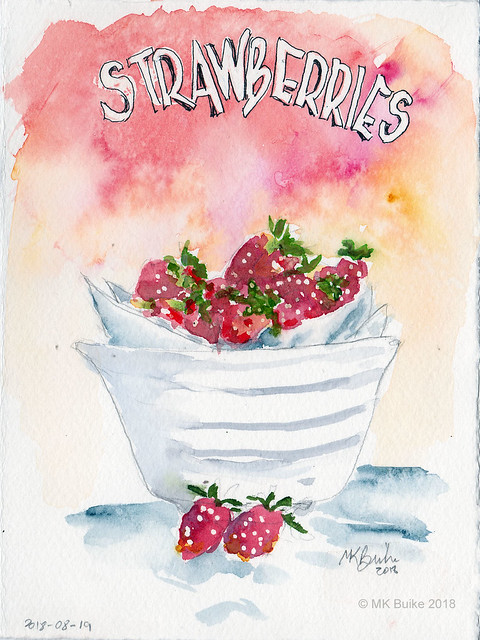 * Hemp Fest was devoted to legalizing marijuana. It was centered several blocks north. I’ve been told it’s gotten smaller since mj was legalized in WA a couple years ago. The main impact on our outing was the restrooms at the pier were closed.

3 Responses to Pier 66 and more