I got the Stamp!

A week or so ago one of the sketchers in Urban Sketchers Seattle posted some sketches from figurehead exhibit at the Museum of History and Industry (MOHAI) that had a stamp from the museum. I’ve been going to MOHAI for years and never knew, or thought to ask, about the stamp.

Yesterday, Saturday, I took a visiting friend to MOHAI to see the WWI exhibit. It was well done, including the social and political context of the times before, during and after the wear years. If you go, allow at least and hour to see it.  No sketches from that exhibit, though lost of photos.

While my friend did something else, I did a quick sketch of the figureheads from ships. 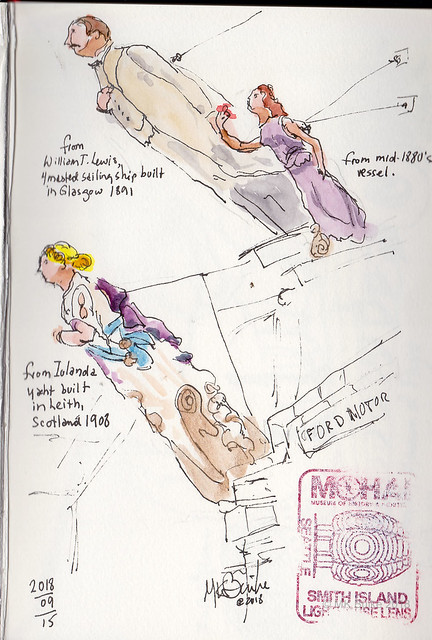 On another note, I was invited to be an Urban Sketchers Seattle blog correspondent on this date, September 16, in 2012. It’s been 6 years already.

Born in Michigan. Attended undergrad and graduate universities there. I've lived in England, Germany, Southern California and now Washington (state). I'm a retired Medical Social Worker with a past specialty in Oncology. I've enjoyed exploring historical re-creation through the SCA. I costume in several fandoms. Lately I've returned to Art and have taken up Urban Sketching, a version of en plein air painting.
View all posts by redharparts →
This entry was posted in Sketches, Urban Sketchers and tagged figurehead exhibit at the Museum of History and Industry, ink, MOHAI, Seattle, WA, watercolor. Bookmark the permalink.

1 Response to I got the Stamp!