About a year ago I bought the new (cheaper) iPad 2018 and Apple Pencil. This gave me the option to use Procreate for sketching. My very old iPad couldn’t even load that app. However, there were so many options and commands, I just never figured it out.
Yesterday (Saturday, 12 January 2019) I went from nearly 0 to 45. I’m not at 60 yet but I have a good start.  I took Gabi Campanario‘s Procreate workshop.

Gabi took us systematically through the basics of drawing with Procreate. We did exercises at each point that helped solidify the concepts and techniques. I definitely ended the day feeling more confident in using this app.  I would emphatically recommend this workshop to anyone wanting to start learning Procreate!

We imported a photo and reduced the saturation so we could draw over it, using layers. That first one was a selfie. Not gonna show it! But here is one from a photo I took in Germany. 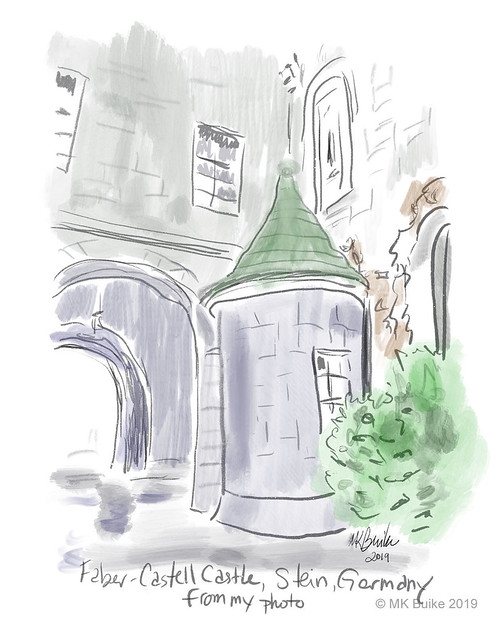 We went out to sketch on location in the afternoon. It was perfect weather: about 55 degrees and sunny. We walked down to Bothell City Hall where we found some sculptures. Gabi told us the charming sculptures are by Georgia Gerber, who also sculpted “Rachel”, the pig at Pike Place Market. All had been given scarves to wear.

My sketch there had to be the otter.  I think it’s much better than the other Procreate attempts I’ve made prior to this workshop! 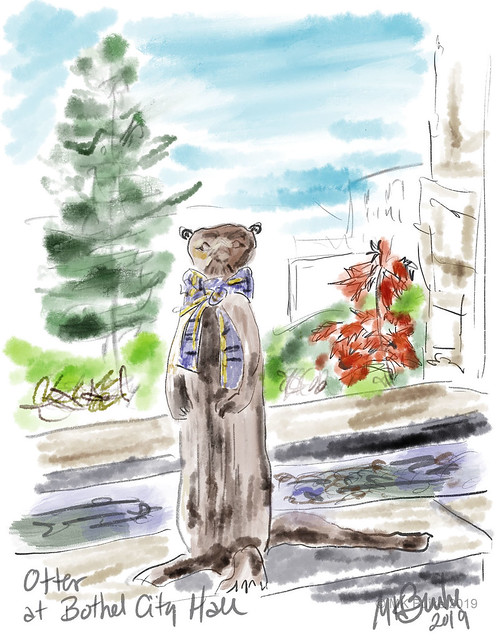 Back at the studio we learned a few more concepts. One difficulty I find is the slickness of the screen. It feels like I don’t have enough control of the Apple Pencil.   I draw on watercolor paper and am accustomed to quite a bit of drag from the tooth of the paper.  Gabi recommended a screen protector film that adds a bit of paper-like friction.  It’s “PaperLike”

As we ended, Gabi took a group photo.

Born in Michigan. Attended undergrad and graduate universities there. I've lived in England, Germany, Southern California and now Washington (state). I'm a retired Medical Social Worker with a past specialty in Oncology. I've enjoyed exploring historical re-creation through the SCA. I costume in several fandoms. Lately I've returned to Art and have taken up Urban Sketching, a version of en plein air painting.
View all posts by redharparts →
This entry was posted in Procreate, Studio, Urban Sketchers and tagged Bothell, digital, Gabi Campanario, Procreate app. Bookmark the permalink.