Posted on February 5, 2019 by redharparts

As I wrote  a few days ago, I’ve been working on a first visual journal page. I involved layers of color and stencils made with texture paste.  I finished it a couple days ago. 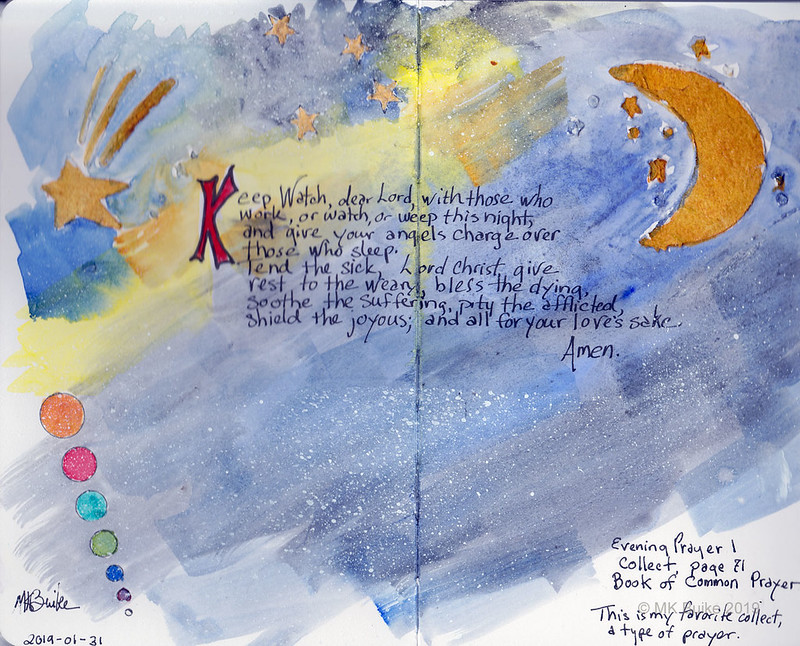 It’s inspired by the project of Eric Scott that I’m following: the “Creative Prayer Book” visual journal.  While not necessarily a prayer book, I thought I would start with my favorite collect from Evening Prayer (or “Close of Day”) in the Episcopal Book of Common Prayer.

As some know, I worked most of my post-graduate career in a federal hospitals. A majority of that time was spent working in the Oncology, Palliative Care and Hospice programs.  Because our patients frequently came late to treatment for various socio-economic reasons, there was too much suffering and dying.  Thus this prayer spoke to me more than others.

Keep watch, dear Lord, with those who work, or watch, or weep this night, and give your angels charge over those who sleep. Tend the sick, Lord Christ; give rest to the weary, bless the dying, soothe the suffering, pity the afflicted, shield the joyous; and all for your love’s sake. Amen.

Born in Michigan. Attended undergrad and graduate universities there. I've lived in England, Germany, Southern California and now Washington (state). I'm a retired Medical Social Worker with a past specialty in Oncology. I've enjoyed exploring historical re-creation through the SCA. I costume in several fandoms. Lately I've returned to Art and have taken up Urban Sketching, a version of en plein air painting.
View all posts by redharparts →
This entry was posted in Journal, Studio and tagged Book of Common Prayer, Visual Journal, watercolor. Bookmark the permalink.