This morning I attended the dedication of the Museum of Flight’s Vietnam Veterans Memorial Park. It was a major event with an estimated thousands attending. The predicted weather might have been an issue but at least the rain held off until the end.

The new park features the Museum’s B-52G Stratofortress, a memorial statue and a tribute wall with personalized plaques from people honoring the veterans in their lives. I’ve watched it being built over the past several months and have done a couple sketches during the active building phase.

This morning I arrived early to get my preferred parking spot. As I waited for the start time, I did a sketch of the view across the street. It’s the Charles Simonyi Space Gallery, which housed the FFT, Space Shuttle Trainer. These are some of the poles that replaced the 27 that mysteriously fell a month ago during a storm. 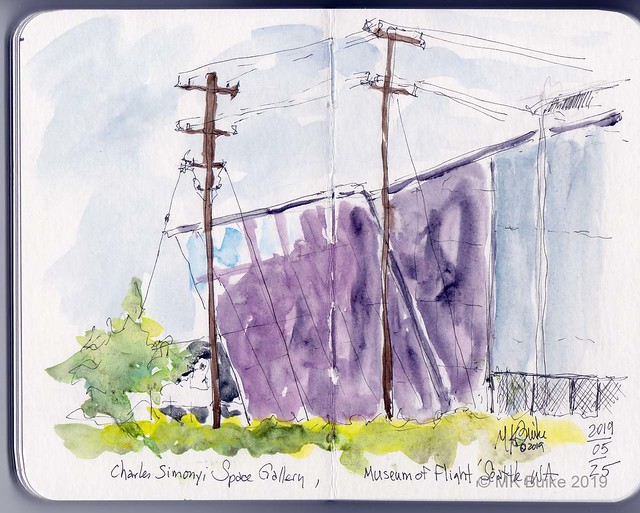 I didn’t sketch during the event as I was not in a good spot to see.

There were many veterans groups attending together.

Gen Mattis, former Sec. of Defense, was the keynote speaker.

All veterans of the Vietnam era received a commemorative pin, distributed by ROTC cadets.

Here is an article from the next day’s Seattle Times.

Born in Michigan. Attended undergrad and graduate universities there. I've lived in England, Germany, Southern California and now Washington (state). I'm a retired Medical Social Worker with a past specialty in Oncology. I've enjoyed exploring historical re-creation through the SCA. I costume in several fandoms. Lately I've returned to Art and have taken up Urban Sketching, a version of en plein air painting.
View all posts by redharparts →
This entry was posted in Photography, Sketches, Urban Sketchers and tagged Beta, ink, Museum of Flight, Stillman And Birn, Vietnam Veterans Memorial Park, watercolor. Bookmark the permalink.