On February 28, 2018 I began my most ambitious sketch series yet. The idea was to document the disassembly, transport and reassembly of the Museum of Flight’s B-52. It is now the focal point of the Vietnam Veterans Memorial Park, which was dedicated yesterday (5/25/19).  Here is an article from the Seattle Times about the event.

The restoration of the B-52 and the building of the park was called “Project Welcome Home”.

Because the veterans of Vietnam did not get one.

Yesterday saw thousands attend the dedication ceremony. Today was much quieter but still a steady stream of visitors came through.

This is my final sketch of the series, showing the completed park. It includes the B-52, of course. There is the returning airman statue. Then there are the flags from all the military branches plus the POW/MIA flag. Finally, there are commemorative plaques, honoring veterans of Vietnam.

The bronze plaques recognize Medal of Honor recipients as well as those who were held as Prisoners of War. 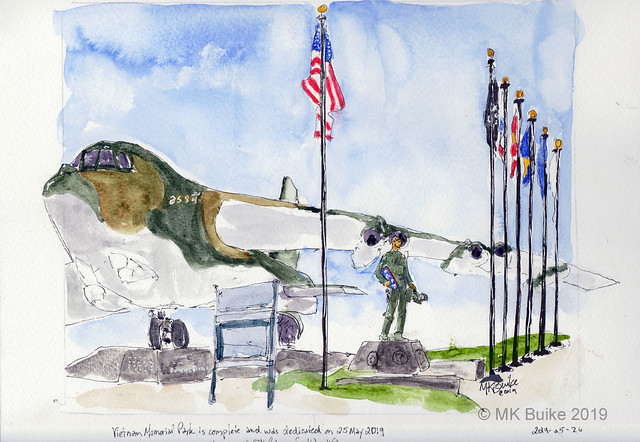 I’ve made a poster as the final display for my project.

Born in Michigan. Attended undergrad and graduate universities there. I've lived in England, Germany, Southern California and now Washington (state). I'm a retired Medical Social Worker with a past specialty in Oncology. I've enjoyed exploring historical re-creation through the SCA. I costume in several fandoms. Lately I've returned to Art and have taken up Urban Sketching, a version of en plein air painting.
View all posts by redharparts →
This entry was posted in Sketches, Urban Sketchers and tagged ink, Museum of Flight, Project Welcome Home, Vietnam Veterans Memorial Park, watercolor. Bookmark the permalink.