Urban Sketchers Tacoma has never been to Fort Steilacoom. Though it was an unusual day and time, there were still a dozen sketchers. The weather was so perfect that everyone elected to sketch outside.

In retrospect, I didn’t find it that interesting. It mostly consists of several buildings that were living quarters and nearly all look the same.

Since it’s also on the grounds of Western State Hospital, I chose a view of a tower from a 1959 building. The flags are the USA, POW/MIA and the Pride Flag, since it’s now June and Pride month. 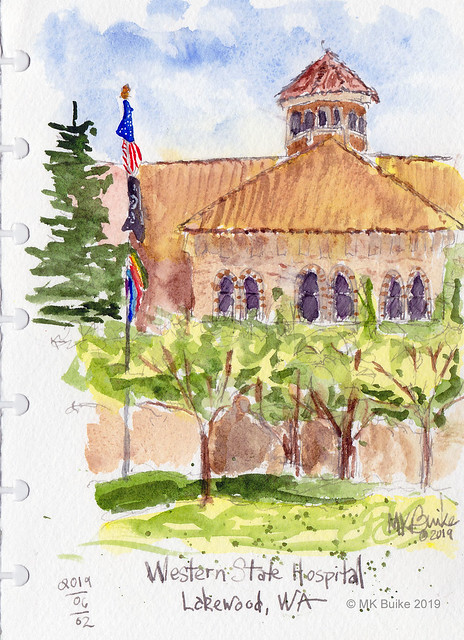 There was a tent set up but it wasn’t being used. There were some re-enactors walking back and forth on the street but they didn’t seem to be doing anything organized. 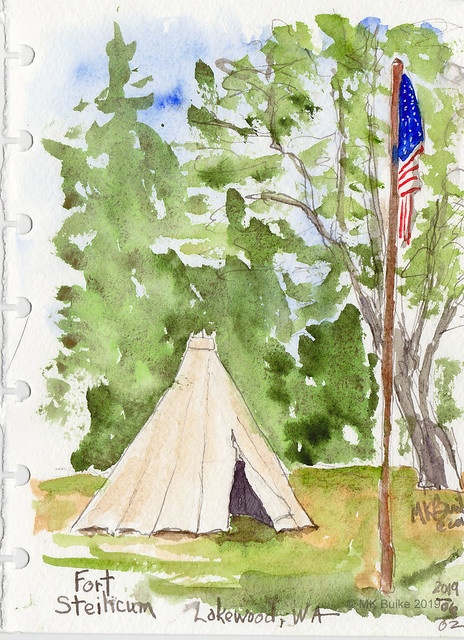 Born in Michigan. Attended undergrad and graduate universities there. I've lived in England, Germany, Southern California and now Washington (state). I'm a retired Medical Social Worker with a past specialty in Oncology. I've enjoyed exploring historical re-creation through the SCA. I costume in several fandoms. Lately I've returned to Art and have taken up Urban Sketching, a version of en plein air painting.
View all posts by redharparts →
This entry was posted in Sketches, Urban Sketchers and tagged Fort Steilacoom, Lakewood, WA, watercolor. Bookmark the permalink.