Top Pot Donuts are some of the best in Seattle.  I’ve noticed these Top Pot vehicles for weeks now.  They seem to be in permanent storage in a lot next to a nondescript building with no signage.  Today I had a bit of time after some errands to sketch the scene.

The small Airstream on the right is probably the one that used to be permanently parked (until it was permanently moved) outside the local hardware store. 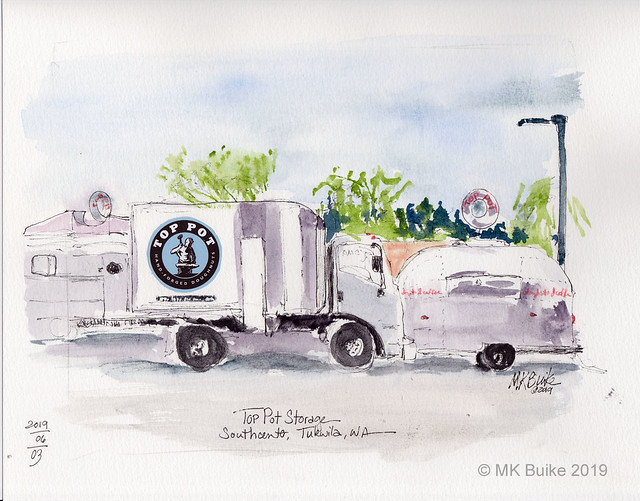 paper collage for the logo on the truck

As I was leaving, I noticed a very small Top Pot logo on the door of the nondescript building.

Born in Michigan. Attended undergrad and graduate universities there. I've lived in England, Germany, Southern California and now Washington (state). I'm a retired Medical Social Worker with a past specialty in Oncology. I've enjoyed exploring historical re-creation through the SCA. I costume in several fandoms. Lately I've returned to Art and have taken up Urban Sketching, a version of en plein air painting.
View all posts by redharparts →
This entry was posted in Sketches, Urban Sketchers and tagged donuts, ink, Top Pot, Tukwila, WA, watercolor. Bookmark the permalink.