Back in August of 2013, Urban Sketchers Seattle had an outing specifically to sketch the Viaduct as it was to be torn down soon. Well…

Today we sketched at the waterfront where the viaduct is mostly gone. It has been demolished over many months and some Seattle Sketchers have documented the process. I have not visited there since the demolition started so I was surprised at how open the area is now.

There are some still sections left and it was a popular subject today. We had 13 sketchers who braved Friday the 13th as well as possible rain. At the end we gathered around a statue of Ivar and his beloved gulls (more on that later).

Most of the sketchers stayed to share lunch obtained from the walk up Ivar’s Fish Bar. Some of us went out to feed french fries to the gulls. Here’s Tina offering some to one of gulls perched there for easy pickings.

I got bombed by one of the gulls! I was throwing fries to gulls on the water below and one of the ones perched above swooped in, hit the paper plate and all the fries went flying. I felt it’s wings as it raced by. So, not such “dainty eaters”!

I sketched this viaduct section in front of Big Fish Games, in the Maritime Building across from the ferry terminal. Himself referred to it as a “via-chunk” when I showed him the sketch later. 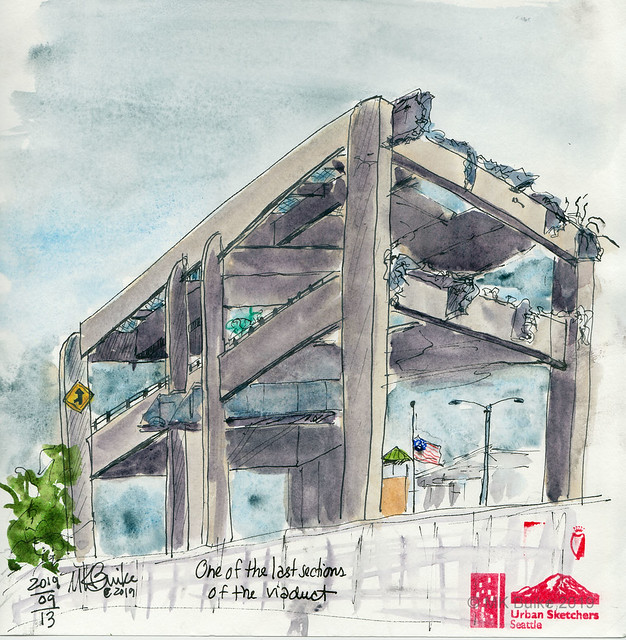 As I walked down the way from the light rail station, I took note of some scenes I might want to sketch. This Ivar’s running clam weather vane caught my eye, out at the end of a pier. The Ivar’s Acres of Clams restaurant and the walk-up window are just around the corner. 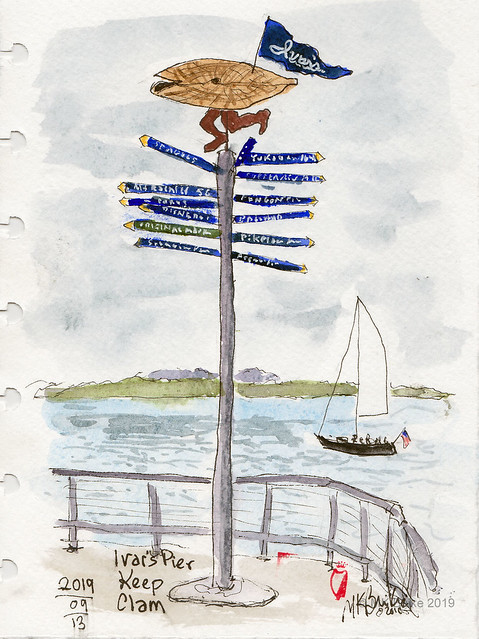