O is for Otter

It was a fun session of Mixed Media Play Day with Janice Berkebile today at the Daniel Smith Mothership!

As always, she brought “all the things”:  her many supplies which she generously allowed us to use. I tried the Faber Castell colored Pitt Pens. 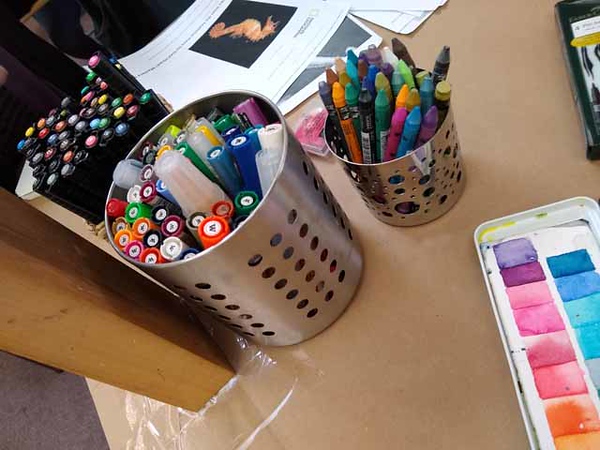 The topic was “Letter Me This”. The idea was to use a sea creature in the creation of a letter. Her suggestion was to use elements of the animal as patterns and motifs: “say it without saying it”.  Her “U” below is based on a sea urchin shell.

But I couldn’t quite get there. My favorite wild animal is the sea otter and I couldn’t figure out how to make that into a letter so I just put her inside a letter.

However, I did work an element into the background. I designed an Illuminated Capitol as seen in medieval manuscripts. Then I got the wild idea to do a diaper pattern ** background. If you notice, inside the diamond shapes are the shape of the otter’s cute little nose and mouth. 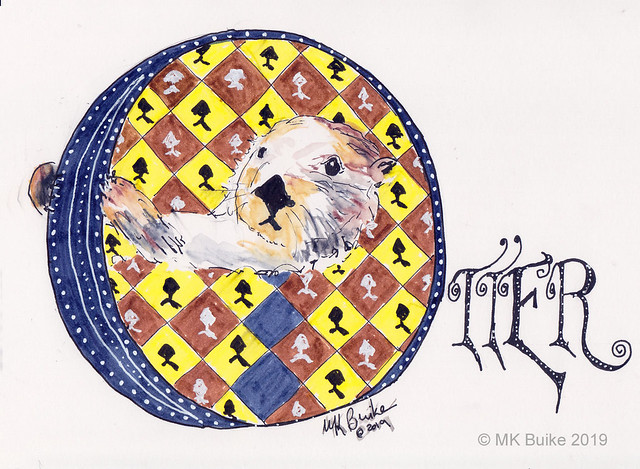 **From the French diapré (‘variegated’), a diaper pattern is a repetitive geometric pattern. Although used as early as the eleventh century, it often acted as a background in GOTHIC illumination.

Born in Michigan. Attended undergrad and graduate universities there. I've lived in England, Germany, Southern California and now Washington (state). I'm a retired Medical Social Worker with a past specialty in Oncology. I've enjoyed exploring historical re-creation through the SCA. I costume in several fandoms. Lately I've returned to Art and have taken up Urban Sketching, a version of en plein air painting.
View all posts by redharparts →
This entry was posted in Crafts, Journal, Sketches, Studio and tagged Daniel Smith, Janice Berkebile, Mixed Media Play Day. Bookmark the permalink.