The RAF Red Arrows are on a tour of North America. They stopped  today at the Museum of Flight. They’ve been on this tour since August, flying Hawk T1 jets.

AJ and I got there early to claim a good viewing spot. I sketched another person also waiting. 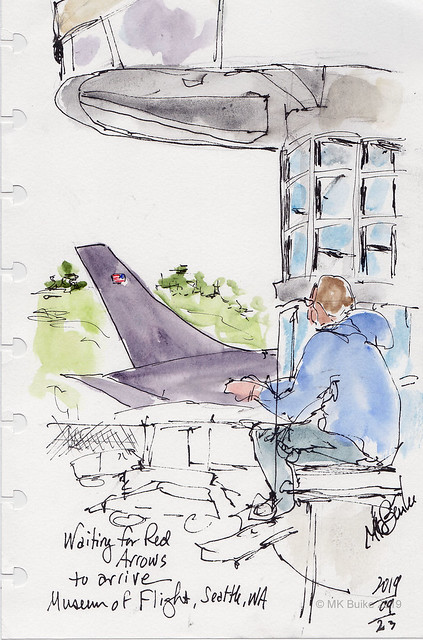 The larger team made two exciting fly overs. Two aircraft landed and parked in the Museum’s lot. The other 10 aircraft taxied to the far side of Boeing Field.

There are two seats in the jets. I learned that ten aircraft engineering technicians are chosen to form a team known as the Circus. Circus engineers are each allocated to a specific pilot for the duration of the summer display season. They fly in the passenger seat of the Hawk to and from display airfields and service the aircraft before and after every display.

It started raining as they landed, just to make this British team feel at home. I did my sketch of the static aircraft in the rain, under a large umbrella, Pete Scully style!

AJ got a photo of me sketching in the rain, under an umbrella stuck down my coat.

We did go inside to get warm, dry and to do the painting. AJ with her sketch an mine in front.

After finishing it, I went out to see the displays in the Museum lobby. I asked which pilots flew the aircraft I sketched. I got one signature (#12, David Simmons, on the left). He graciously offered to get the other pilot to sign it so took my sketch upstairs #11) 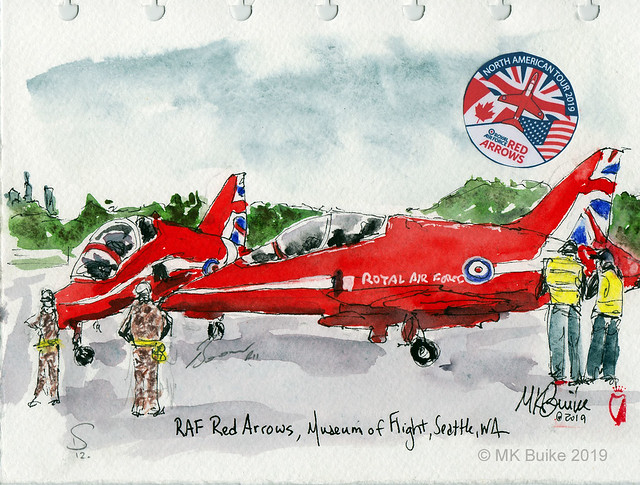 Born in Michigan. Attended undergrad and graduate universities there. I've lived in England, Germany, Southern California and now Washington (state). I'm a retired Medical Social Worker with a past specialty in Oncology. I've enjoyed exploring historical re-creation through the SCA. I costume in several fandoms. Lately I've returned to Art and have taken up Urban Sketching, a version of en plein air painting.
View all posts by redharparts →
This entry was posted in Photography, Sketches, Urban Sketchers and tagged Museum of Flight, RAF Red Arrows, Seattle, WA, watercolor. Bookmark the permalink.