We arrived at Manchester airport on Wednesday and the day was spent in travel to Leeds and getting settled in.

On Thursday, 3 October, I had a walk around the area and visited the place I used to live.  I had a fellowship year at the University of Leeds a few decades ago and lived on Bennett Road, just around the corner from our hotel.  The top window was my room.

In the evening, we walked down the Otley Road to the coffee shop where Joe Bean had his art show opening. It was quite good. The show as made up of sketches of the deconstruction and rebuilding of Headingley stadium. Several people were there. Afterwards, it was starting to rain so we took the bus back to the hotel. 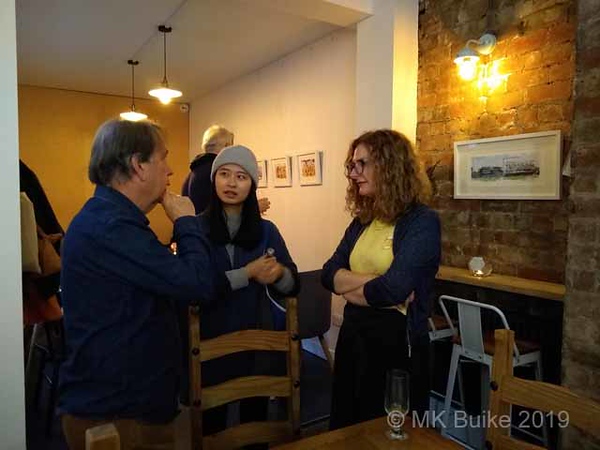 We went to the Royal Armoury south of Leeds city center on Friday, 4 October. There are four floors of exhibitions, though not a lot on the 3rd floor. I started on the 2nd, where the oldest armor is. Swung through and then settle down to sketch a man and horse in armor from 15th century. It’s rather late period for my taste but it’s what was most appealing. The equestrian armor is from late 15th century German, or “Gothic” style. The horse armor was probably made in 15th century as well. 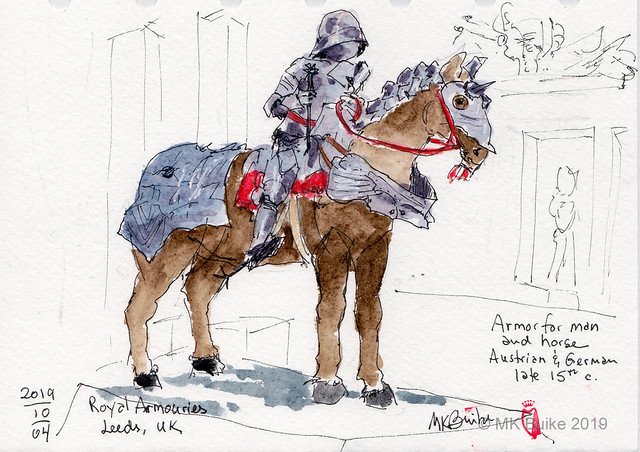 After lunch at museum cafe, I went up to 4th floor to sketch a massive model of elephant in armor! Both riders wore chain maile. And so many articulated plates in the elephant armor! This is, of course, from India and probably daes from late 16th to 17th century. This is the only known surviving example of a near-complete set of mail and plate elephant armor!  Later the USk Yorkshire sketchers said, looking at my sketchbook, “everyone sketches the elephant!”. 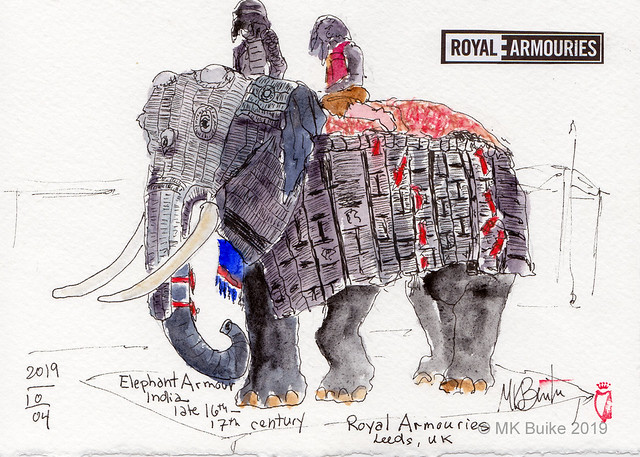 The long-ish bus trip back to Headingley was very long: the bus abandoned us in south Leeds! Driver’s replacement didn’t come so he asked us to leave the bus, he walked away and we were to wait for the next one. It was about 30 min later. We had a nice chat with a woman from suburb north of Leeds whose council is taking issue with such bus service. Eventually got on the next bus and sat in the front seats of the upper level so got a good view of the tour through Leeds. Saw the rail station, Queen’s Hotel, Leeds University Tower, Pack Horse Inn where I went to hear music, and Hyde Park.

Saturday, 5 October was the afternoon sketch walk around Headingley led by Joe.  Fortunately, on my way I ran into him. I was heading to the wrong point at the stadium. He said they’d indicated the cricket ground entrance but I hadn’t noticed that. It was about 4 blocks around the stadium to the correct location. Good thing I ran into him. We were about 10 people. The walk was 1445-1600, so not very long. Spent a lot of that time walking! We did do 3 15 minute sketches.

First at the stadium, where I sketched an off license across the street. As of this moment, I can’t find that sketch!  Then we walked over to the “Bear Pit”. It dates from late 1800’s but I’d never heard of it that I remember. 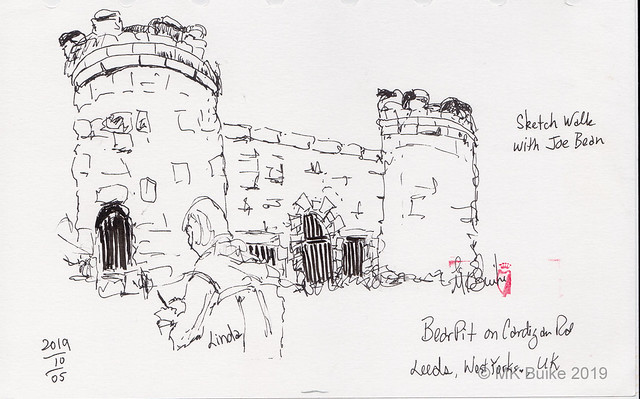 Joe took the group photo at this location, so he’s not in the photo.

Last stop was at an entrance to Hyde Park. I sketched a church steeple. 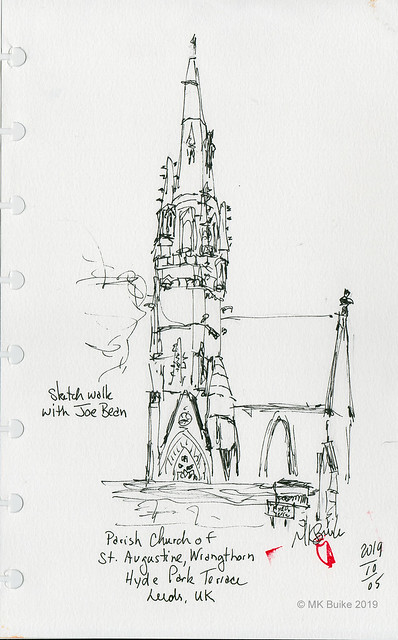 We shared sketches at a corner in the park.

Then we ended at the Coffee on the Crescent where Joe’s show is hung. We had a coffee and sat for about an hour, talking and looking at each other’s sketchbooks.

I joined the USk Yorkshire outing to Skipton on Sunday, 6 October.  The location was chosen for the Puppet Festival. I wasn’t interested in that though I did take a brief break from my sketch to watch the parade from afar.

My first sketch was of the parish church. 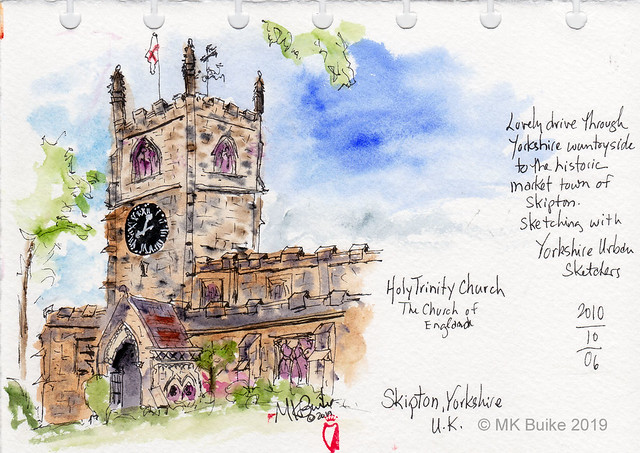 Himself and I then went into the Castle. I wandered around before settling in to do a sketch of one of the short towers. Talked with another sketcher, Jan, who, as it turned out, knows Tina from USk Seattle! They met in a pencil interest group. We went to lunch together and Himself joined us. I had the best pasty I’ve had in many years! 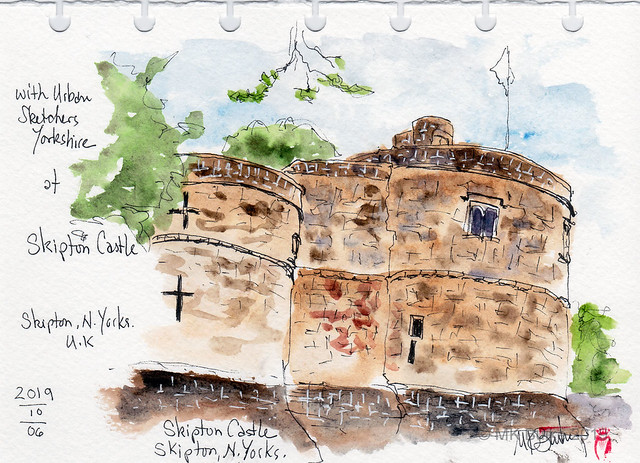 I got to the 1500 meeting spot at the pub just a few minutes late. They seemed to like the goodie bags. We shared sketch books around while having drinks (coffee for me, thanks). We mostly escaped the predicted rain so sat outside on the patio. I looked through many excellent sketchbooks. I had a perfectly lovely time and am very glad I went! 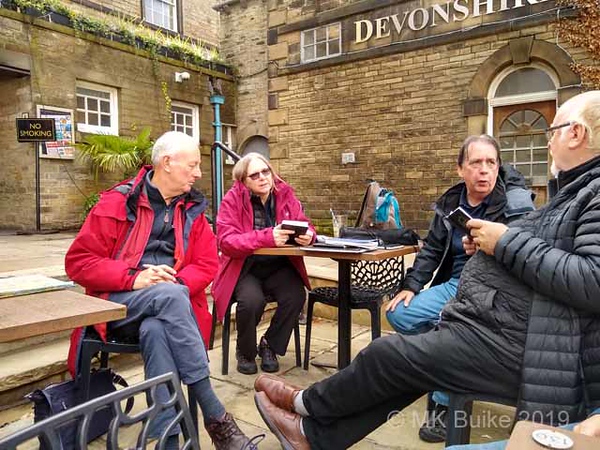 Himself took the group photo:

Then I did the driving home.  The route was on back country roads so I got comfortable driving on the left.

Monday’s (7 October) destination was the “historic market town” of Thirsk. It’s actually famous for being the real location of the home and surgery (veterinary practice) for the man who wrote the James Herriot “All Creatures Great and Small” series.  That was James Alfred Wight.  It was staged to look as it did in the 1940’s.   I sketched the front door to the surgery. 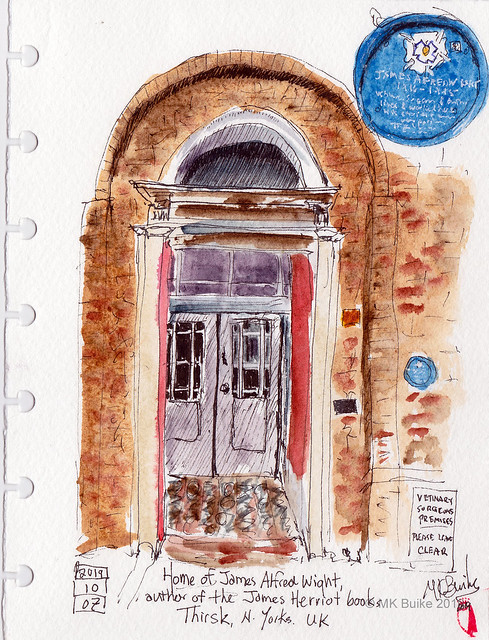 See link below for lots of photos from inside the house.  Our selfie in front of the statue of Dr. Wight

The place had the feeling of a small, country town.  Yet the high-tech 21st century was present in this electric vehicle charging station:

And the defibrillator on a wall on the street:

Finally, Tuesday, 8 October was an all day trip to the great Fountains Abbey.  It is the largest monastic ruins in the country with its history beginning in 1132. I’d made at least a couple visits there during my student days at Leeds.  I did two sketches, east and west views. 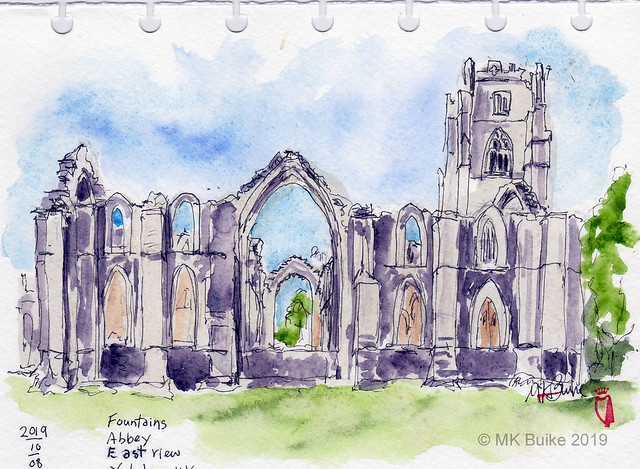 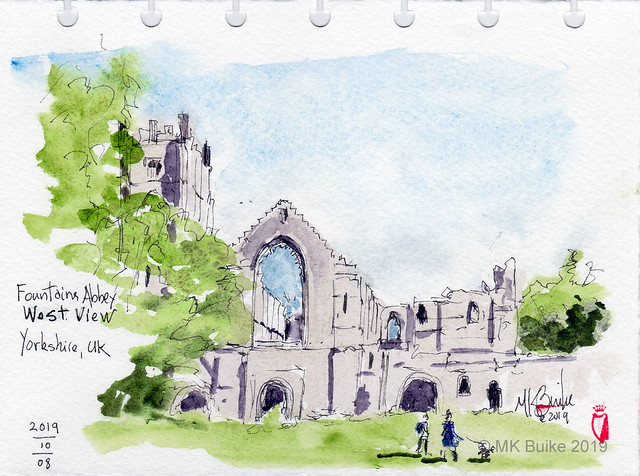 2 Responses to Yorkshire – week one