Wednesday, 9 October was a day for Himself.  While attending a talk at McMenamins Anderson School in Bothell, we met the brewmaster for Samuel Smith’s brewery in Tadcaster.  He invited Himself to get in contact if in England and offered a private tour of the brewery.  Himself made contact so today was the day for that tour.

Samuel Smith is the oldest brewery in Yorkshire, established 1758.  They use traditional methods to make their beer.

To my delight, our first stop was the stables for the mighty grey Shire horses! We met Sovereign, who is their oldest horse at 17 years. He will retire soon (1-2 years) and they have already found and are training his replacement. Horse master Simon brought out Prince for us to meet. He’s their largest horse at 18 hands. The horses haul a beer wagon and deliver kegs to Samuel Smith pubs within a 5 mile radius…every week day, all year round.  Simon later left a large horse shoe for me which was recently removed from Prince. It’s a great souvenir.

I agreed I wouldn’t share the photos I took inside the brewery. And it went too fast for me to do any sketching.  They still uses slate stone Yorkshire squares to ferment all its ales and stouts (except Sovereign and Extra Stout) and the same yeast strain has been used since the 1800s.

Because I remained interested in Yorkshire, I took note when the listed 18th Century bridge in Tadcaster partially collapsed on 29 December 2015 due to a flood. The town was cut in two to traffic, with the only crossing being a temporary footbridge.  The tan colored stones in the photo below is the repair.

On Thursday, 10 October we had a bit of a rest day.  Himself had developed a cough similar to the one he had during the trip to Germany last December.    I did take the bus down to the university and wandered around a bit. I didn’t go very deep into campus. The student union is in a new building and has so many services. The market even had Krispi-Creme doughnuts!

I didn’t try to find the building where I had Social Work classes.  What I did learn is that the Social Work department is now housed in the new medical education building.

I did a sketch of one of the original red brick buildings, the Great Hall. 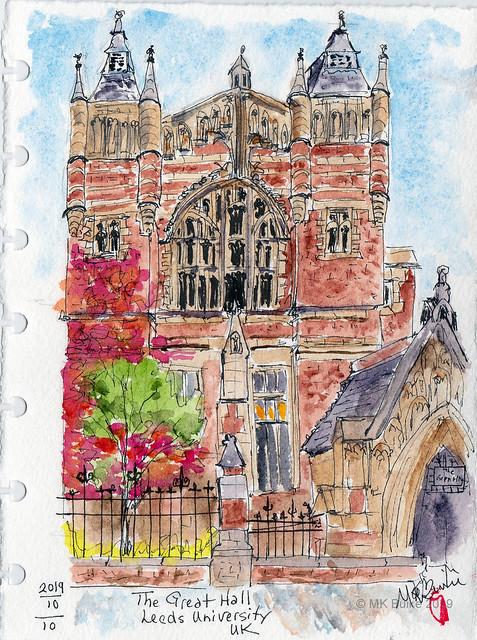 Friday the 11th was a travel day which we also used to do laundry while on the move to York.  I identified a place not too much out of the way that had parking for the car.

We arrived at check in time at our hotel, which was just outside the city wall.  After unpacking, I went out to explore the area close by. I did a sketch of Micklegate, one of the many old gates through York’s city wall.

Micklegate comes from Mickelith, meaning “Great Street”. As the main gate into York from London and The South, Micklegate Bar has been the scene of much pageantry and many receptions for kings and queens. Also, the severed heads of rebels and traitors were once displayed here. 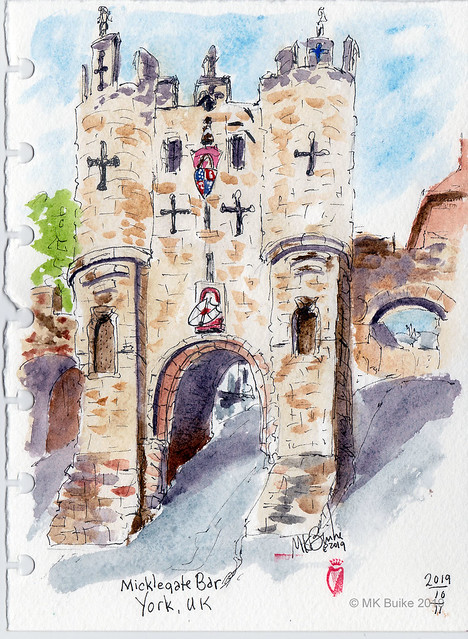 The view from near our hotel

Saturday, 12 October was probably the best weather day of the trip so far.  I decided to go to the Shambles, a famous, old, medieval street.  Himself still feeling poorly.  Since the weather was so good, I planned to do a sketch.  Bad Idea.  The street is very narrow and it was jam packed with tourists.  No room to stand and sketch.  I must say, though, the Shambles has become a bit of a Diagon Alley! That’s a Harry Potter reference.

Sunday (13th) was another lazy day.  I didn’t go out until the afternoon.  I walked around the wonderful York Minster (a great cathedral) prior to attending Evensong. There was a queue to get in. The sung service lasted about an hour. I had trouble hearing some of the speaking…. amplification was both not quite loud enough and the echo was such it made words indistinct. No sketching.

It was raining and I walked back to the hotel along the city wall.  The fall colors are very subtle.

Something new in the decades since I lived here: ” YorkyPud” It’s a Yorkshire pudding pastry used as a wrap around a pie filling of beef and vegetables. Lots of beefy chunks. It was good.

I had a plan of action for Monday (the 14th)!  At about 8am I left to go to the Shambles to sketch. It was a bit chilly but clear and dry. The Shambles was virtually empty so I had a good opportunity to sketch.

What a difference a couple days make. 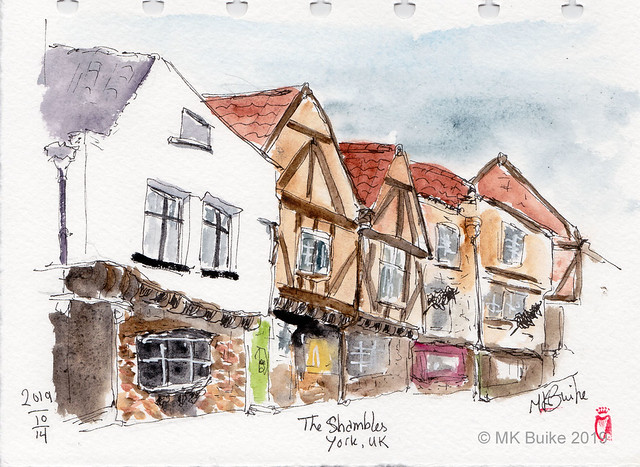 Instead of going into the Minster at 0900 when it opened, I went to the larger of the two Betty’s tea rooms for breakfast. Had a pot of tea and a scone. I don’t think scones are for breakfast, but I did not care!  I’d tried to get into Betty’s on Saturday but the lines were out into the street!  No line and plenty of tables this am.

After getting warmed up by the tea, I walked around the Minster and found a good view to sketch that wasn’t toooo Gothically intimidating! 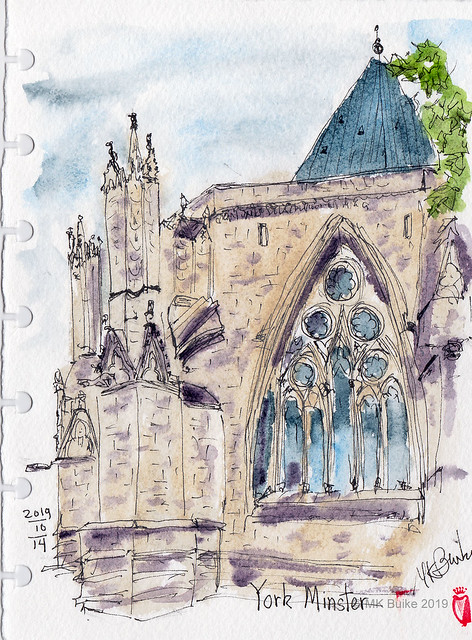 After a bit of a rest, we set out for the Railway Museum together. I did one sketch of a Royal train that wasn’t black! See link below for lots of photos. 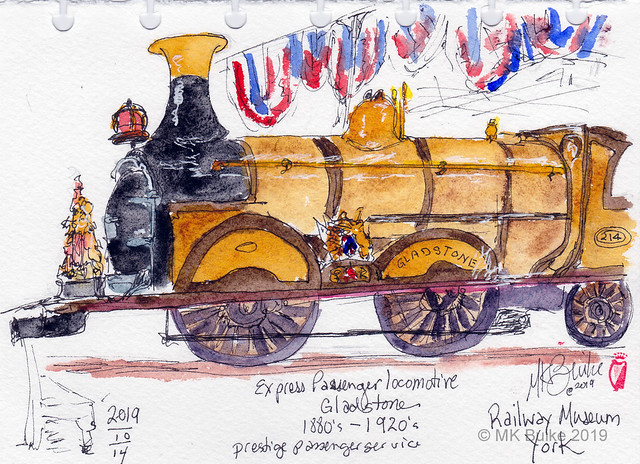 Tuesday, 15 October.  We drove back roads to the North Yorkshire coast. To get there we traveled through the wild and desolate North York Moors National Park.

First we stopped at Whitby Abbey. It’s not a very big site so we walked around a bit and I did one sketch of a section of wall.  The ruins are that of a 13th-century Gothic abbey but it was first founded in about AD 657.  It was here that St Hild, a pioneering abbess, hosted the 7th century Synod of Whitby at the abbey, where church leaders decided the English Church should follow Roman rather than Celtic practices 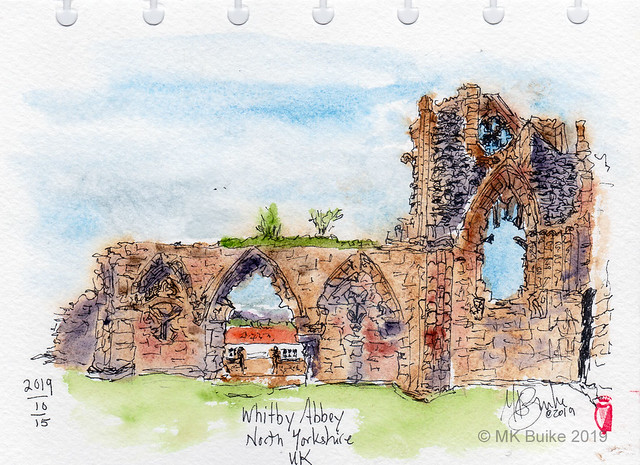 This is one of my favorite sketches of this trip.

Then on to the quaint fishing village of Staithes. We had to park high up the hill and walk far down to the beach, where most of the quaint old town was. There were hardly any shops open.  There are lots of holiday cottage rentals. I didn’t see the classic looking-down-the-hill view. And I didn’t do a sketch. It was a long slog up the hill!