Wednesday, 16 October.  This was Museum Day.  We went to two plus a walk around inside the city wall.

In the Yorkshire Museum I was only interested in the medieval section and there wasn’t very much of that. We didn’t stay too long. It wasn’t the place that Don was remembering. Turns out that was the Castle Museum, where we went next. He wanted to see the recreated Victorian street again.

I didn’t take as long to go through, so I went outside  to sit on a bench in the sun and sketched Clifford’s Tower.  It has a dark history.  The present stone tower dates from the 13th century. 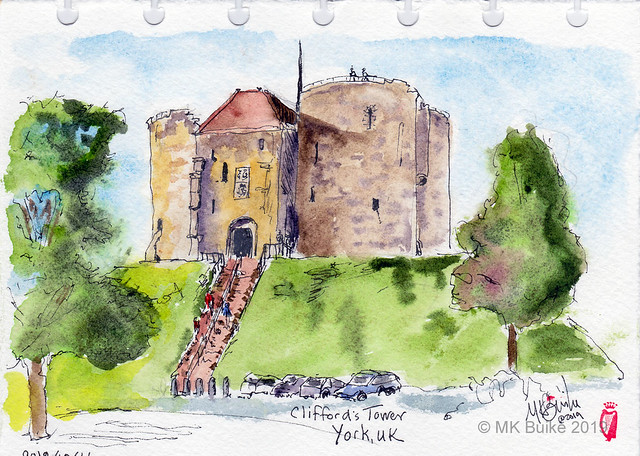 Then we walked through the Shambles and a bit around York minster so Himself could see them again.

Thursday, 17 October York-Manchester  This is the last leg of our trip.  On the way, we’d arranged to stop at the new home of an old friend of mine.  I knew Jan during the time I was at Leeds University.  We’d lost touch for many years but she recently found me via my blog!  We spent the afternoon in conversation, catching up on the intervening years.

We thus arrived in Manchester later than might have been best.  It was after dark when we got to the hotel in Manchester.  We missed a couple turns but got there OK, found a close parking spot on the street so we could unload. The room was very small and it was hard to fit everything and move around. But wif was fast and the shower was good.

So it was in the dark that we drove to Hertz car return at the airport. Again missed turns but still got there OK. Car turned it with no additional charges. Then we went by airport bus to Terminal 1, walked to the train station and caught the correct train.  It was another bit of a walk back to the hotel, navigating in the dark by GPS.

Manchester is not in Yorkshire.  Our last days there were so Himself could attend Ogg Camp, a computer conference, on Saturday and Sunday.

Friday, 18 October:  This was one of two days Himself had to explore Manchester.  As we walked to the city center, we stopped to visit the Turing Memorial.  More on that later. 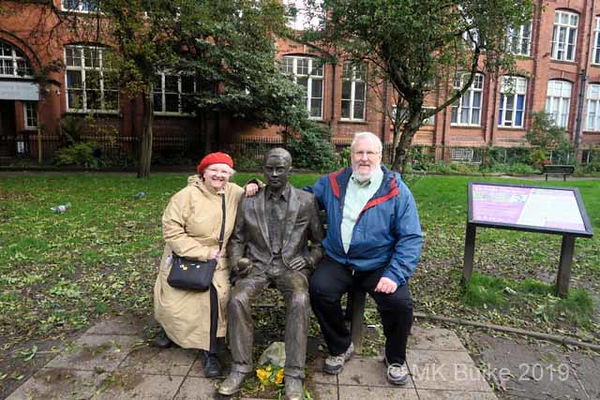 We walked through the city center to the John Rylands Library. It was founded by Enriqueta Rylands in memory of her husband John Rylands. In 1889 the architect Basil Champneys designed the striking Gothic building, which took ten years to build and was opened to public readers on 1 January 1900.  The long reading room is lined with statues of famous men of science and letters.  I chose to sketch that of Gutenberg. 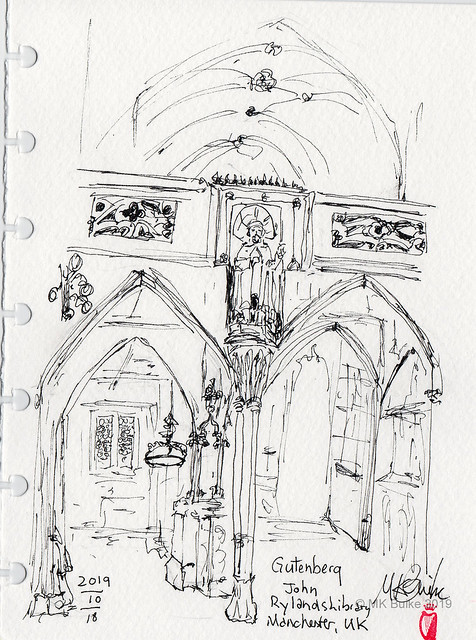 Neither one of us got a good photo of the long reading room.  There are lots of other images linked below. 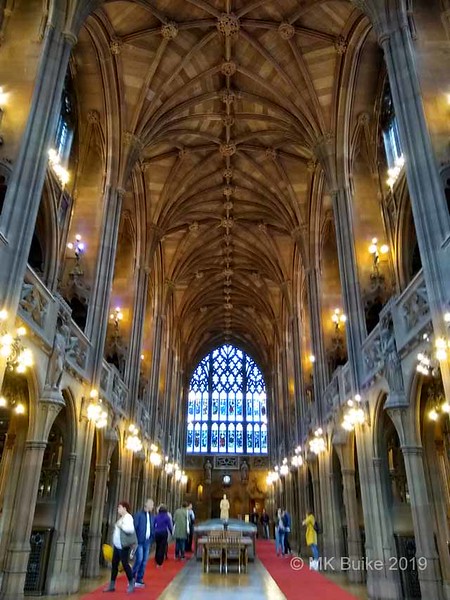 Saturday, 19 October:  I’d made contact with USk Manchester and Monika organized a sketch outing.  Unfortunately, not many were able to attend.

I met Monika.  We sketched in the central library. She showed me the wonderful round upper room with a beautiful dome. 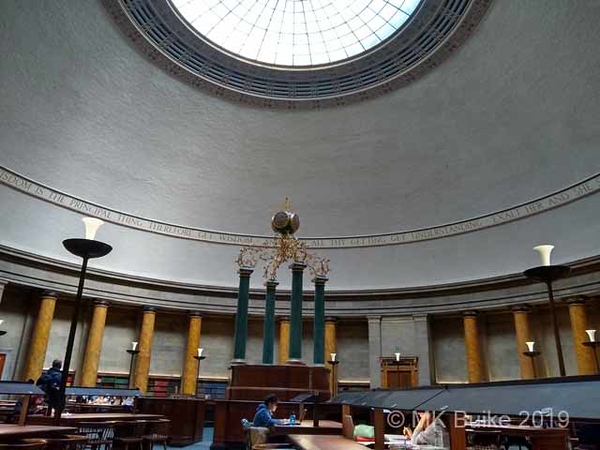 But I wanted to tell the story of the Manchester Worker Bee and there was a sculpture near the lobby.

“The Manchester worker bee is one of the best-known symbols of Manchester and has been an emblem for the city for over 150 years. The bee denotes Mancunians’ hard work ethic and the city being a hive of activity. It has also come to represent the sense of unity in our great city.” 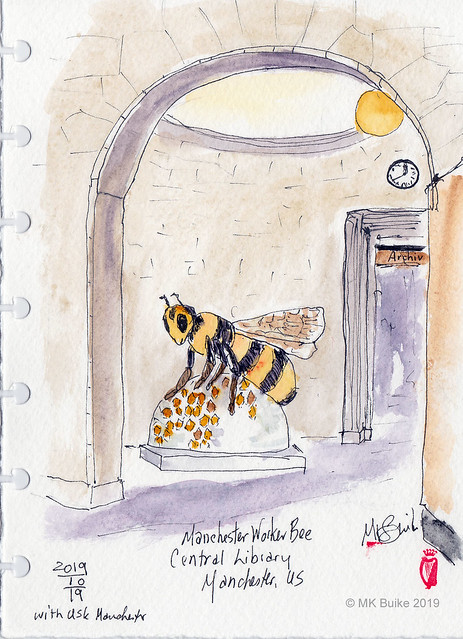 Ann Marie met up with us later, at the art museum. And a friend and coworker of Monika’s even later. We sat in the museum cafe for tea and sharing stories of sketching adventures and our sketch books. I forgot to get a photo of us!

Afterwards, Anne Marie took me on a tour of the art stores I’d wanted to see! We went to Cass Art and then to nearby Fred Aldous. I’d thought I might get a Seawhite of Brighton sketch book but in the end decided not. It’s only 90#, landscape format, and not cotton paper. I saw Daniel Smith paints in Aldous. 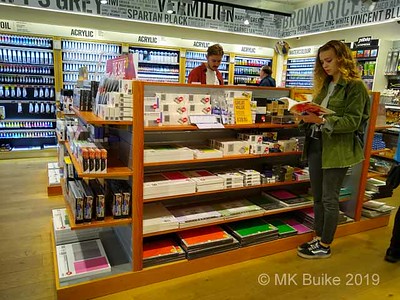 Sunday 20 October:  While walking to other venues I identified some places I wanted to sketch.  However, as I was leaving the hotel, I encountered this interesting duo:  one live in the hallway and the other remote on a rolling screen.  It’s Ogg Camp here, after all. 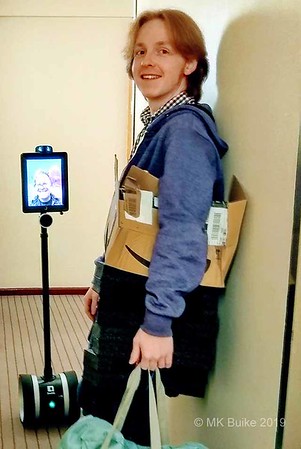 I started with VIMTO.  “The high sugar level and the strong flavour works as a welcome energy boost after a day of no food or drink. Ramadan has begun and Muslims around the world will abstain from eating and drinking during daylight for a month – and a certain British soft drink will play a major role.” 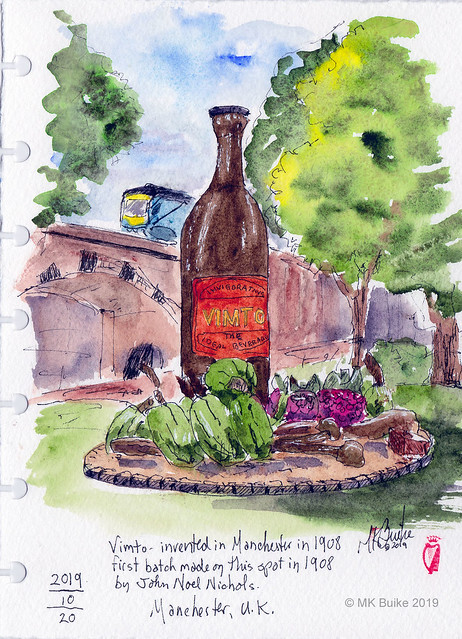 I bought the two versions of VIMTO currently available: the still juice in a box and the fizzy version in a can.  They were both rather vile.  Himself likened the taste to Robitussin!

But it was a stop on the Manchester tour: 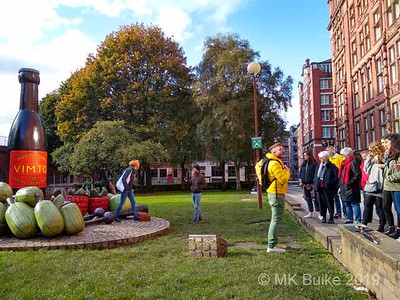 Next, I went to Sackvill Gardens for two sketches. It is described as being in the Heart of Manchester’s Gay Village. First is the LGBTQ+ Queen Bee. Remember, the Worker Bee is a symbol of Manchester. Designed and decorated by CJ Taylord Art and Ben Sedman Photography.

“The LGBTQ+ Queen Bee design is a symbol of LGBT Pride. The legacy and poignancy of Alan Turing’s life is mirrored in the eyes of this beautiful Bee. Street names and landmarks tell the story of Queen Bee’s new home at the heart of the Village. This sculpture inspires us to accept, embrace and celebrate life in all its glorious forms. The ultimate message is #LoveIsLove.” 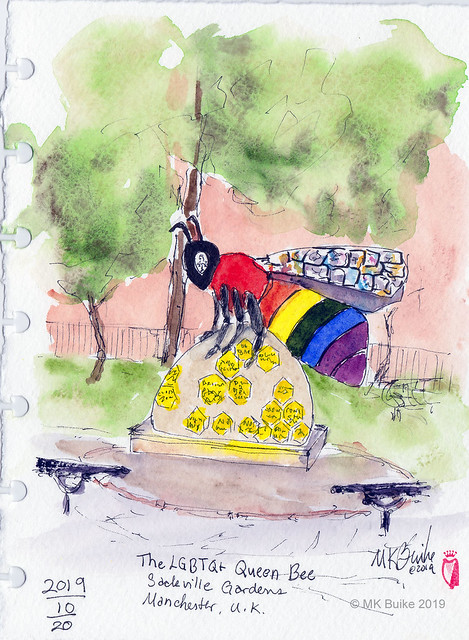 From what I’ve gleaned, it was one of many bees placed around the city last year in the Bee in the City project.

Lastly, I sketched the stature which is a memorial to Alan Turing. “Unveiled in 2001, the figure sits on a bench, which is itself made of bronze, holding an apple which is likely meant to signify the biblical fruit of knowledge. Etched on the bench behind him is a rough cipher meant to look like the output of the infamous Enigma Machine which Turing helped crack. When decoded, the phrase reads, “Founder of Computer Science.” “ 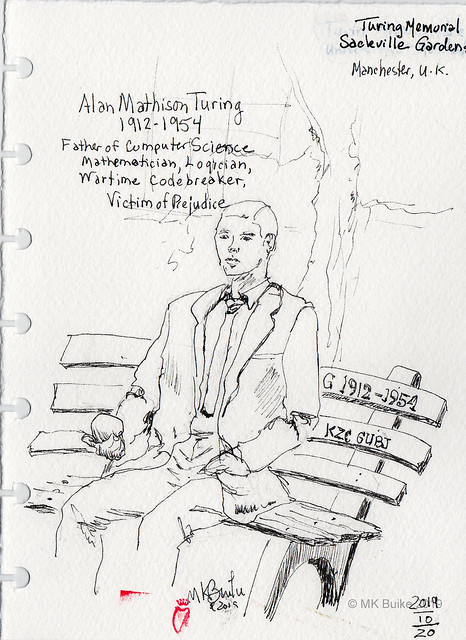 However, I’ve read something different about the apple: As the story goes, on 7 June, 1954, he committed suicide by eating an apple laced with cyanide. However, that might not be the whole story.   “Turing committed suicide after being legally outed for being homosexual making him an important figure in the LGBT community. The statue’s placement seems to reflect this as it is located near to Manchester’s gay culture center.”

During our final day in England we just took it easy.  I worked on photos, documenting sketches and other tasks.

Mt. Dew is stocked in the energy drink aisles of the grocery store.

When I lived in Leeds in the late 1970’s, everyone used “Ta, luv” as a greeting, a thank you, etc. No one says it now.  I had one store clerk say it to me the entire time.  Everyone just says, “Cheers” now instead.

Shop keepers, restaurant servers, etc say “Ya’ alright?” as a greeting that might mean, “can I help you?”.

Again, during the time I lived in Yorkshire, roast beef and Yorkshire pudding was ubiquitous.  I couldn’t find it on the menu anywhere during this trip!  The friend we visited did take us to The Carvery, an upscale buffet, that served it so we finally had some.

There are probably as many coffee shops now as tea shops. There weren’t as many Starbucks as I thought there might be.  Most of the coffee shops I encountered seemed to be independent ones.

At the University of Leeds, no one wore the traditional university striped scarves.  Nearly everyone did when I was there.