Posted on November 3, 2019 by redharparts

This morning was another fun time exploring watercolors with Jodi Steele at the Daniel Smith mothership.

I played around with some new colors. Then I experimented with the Black Lava Salt I got at the airport in Iceland. It does leave black specks after it dries on the paint.  It could have it’s uses in providing texture for painting of soil, sand, rocks but not for the usual uses of salt in watercolor.

Then I settled down to sketch an ear of colorful corn. Jodi had brought several she placed on all the tables.  This may become a Thanksgiving card for some people…. 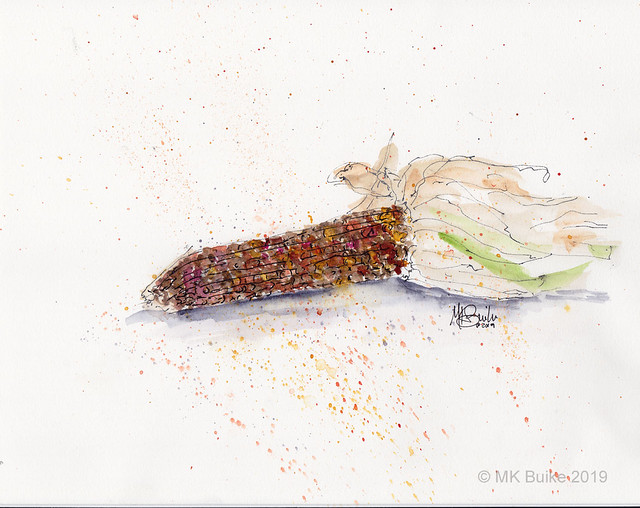 Born in Michigan. Attended undergrad and graduate universities there. I've lived in England, Germany, Southern California and now Washington (state). I'm a retired Medical Social Worker with a past specialty in Oncology. I've enjoyed exploring historical re-creation through the SCA. I costume in several fandoms. Lately I've returned to Art and have taken up Urban Sketching, a version of en plein air painting.
View all posts by redharparts →
This entry was posted in Class, Sketches, Studio and tagged Daniel Smith, Daniel Smith watercolors, ink, Social Watercolor, watercolor. Bookmark the permalink.

2 Responses to Corn and Watercolor