As it often does, my journey into Seattle began at the light rail station.  This was barely a 5 minute sketch of a bicyclist waiting with his ride for his ride. 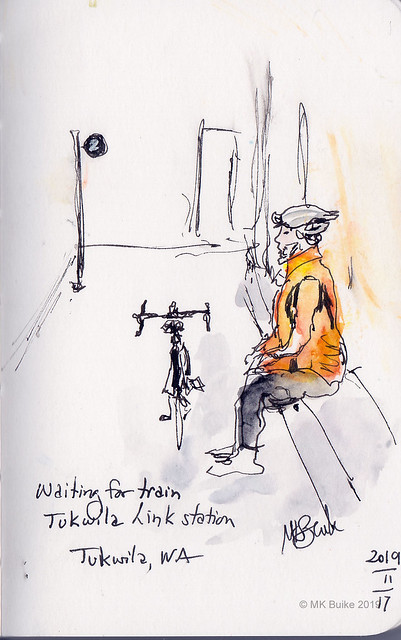 The Urban Sketchers Seattle again met in the lobby of the Seattle Art Museum (SAM).  I’ve already sketched my favorite items there, though that doesn’t mean they aren’t worthy of being sketched again.  One can always look for a new approach.

But since I’m a member, I decided to have a look at one of the new exhibitions:  “Taking Tea” in the Porcelain room.  Clair Partington created this installation of more than a 1000 objects. The central figures are “taking tea”.   Of note in the group of figures are “two sailors. One is washed up and presumed dead, and the other clings for life. Both are ignored by the tea party group.”  Drawn in aqua pencil in the gallery, with water added later, after I left the gallery area. 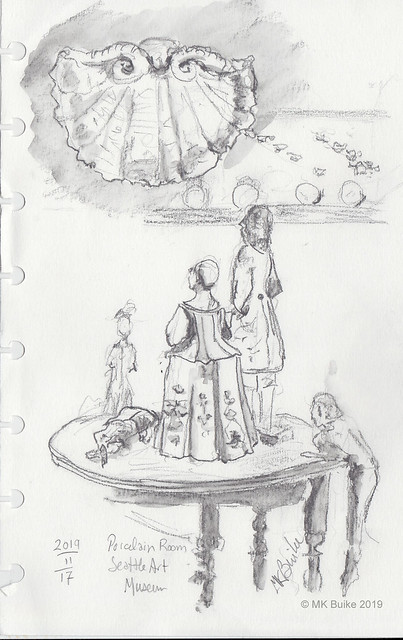 I always like the view from the Harbor Steps across the street from SAM but I’ve not sketched there.  The table and chairs added a pop of color on this gray day. 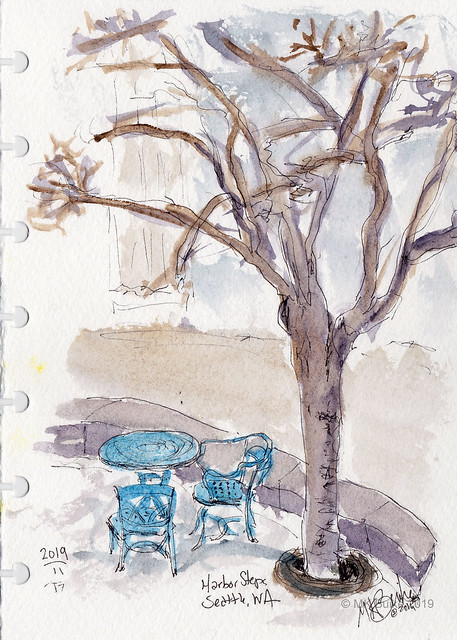 Born in Michigan. Attended undergrad and graduate universities there. I've lived in England, Germany, Southern California and now Washington (state). I'm a retired Medical Social Worker with a past specialty in Oncology. I've enjoyed exploring historical re-creation through the SCA. I costume in several fandoms. Lately I've returned to Art and have taken up Urban Sketching, a version of en plein air painting.
View all posts by redharparts →
This entry was posted in Sketch Crawl, Sketches, Urban Sketchers and tagged ink, pencil, SAM, Seattle Art Museum, watercolor. Bookmark the permalink.