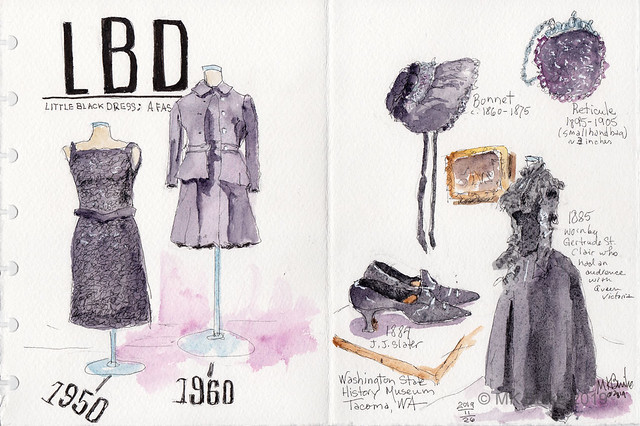 This is an exhibition at the Washington State History Museum that runs through December 5th.  I had a free pass so decided to see this before it closed.

“The little black dress, or ‘LBD’ as it is frequently called, has been a fixture in many wardrobes for over a century. One of the most iconic items of clothing in the 20th century, the LBD continues to hold a place in both fashion and memory”.

I have never owned an LBD. I suppose that is because I almost never attend the sort of parties or events where it would be worn. However, that suit from 1960 is something I would wear even now. It looks classic.

Sketching this was difficult as everything was black, of course, and poorly lit. The lighting was a preservation issue, I presume.

I decided to do a montage with much of the page devoted to the Victorian era. I was rather surprised to find such pointy shoes from that time period.

Born in Michigan. Attended undergrad and graduate universities there. I've lived in England, Germany, Southern California and now Washington (state). I'm a retired Medical Social Worker with a past specialty in Oncology. I've enjoyed exploring historical re-creation through the SCA. I costume in several fandoms. Lately I've returned to Art and have taken up Urban Sketching, a version of en plein air painting.
View all posts by redharparts →
This entry was posted in Sketches, Urban Sketchers and tagged Little Black Dress, Washington State History Museum, watercolor. Bookmark the permalink.