Posted on December 7, 2019 by redharparts

Urban Sketchers Tacoma met at the Hotel Murano to sketch the lobby’s holiday decorations. Nearly everyone sketched the tree.

As I was on the bar platform a few feet above the lobby, several Air Force service members sat down to await their colleagues. These two, a LTC and a MAJ, seemed to be flight crew. I wondered why military were staying in such a high end hotel and then I remembered who owns the Murano…. one of 45’s cronies. 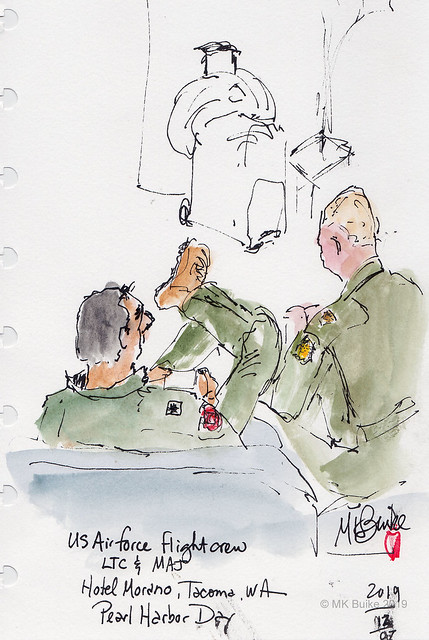 Of course, I sketched the tree, too. 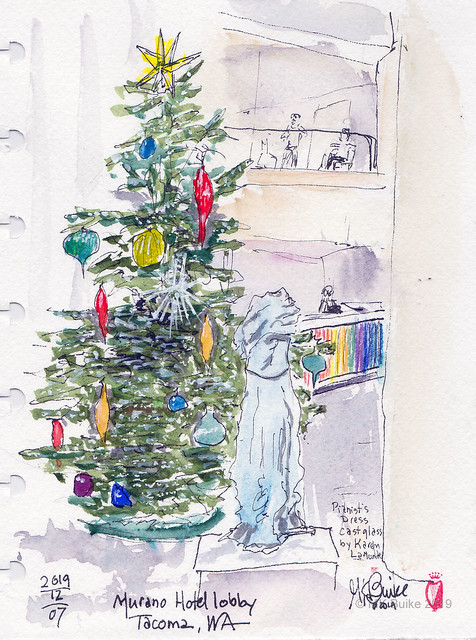 Born in Michigan. Attended undergrad and graduate universities there. I've lived in England, Germany, Southern California and now Washington (state). I'm a retired Medical Social Worker with a past specialty in Oncology. I've enjoyed exploring historical re-creation through the SCA. I costume in several fandoms. Lately I've returned to Art and have taken up Urban Sketching, a version of en plein air painting.
View all posts by redharparts →
This entry was posted in Sketch Crawl, Urban Sketchers and tagged Hotel Murano, Tacoma, WA, watercolor. Bookmark the permalink.